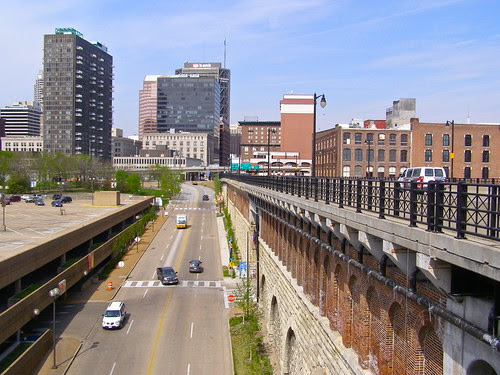 Washington Avenue from Memorial Dr. to the riverfront. Photo by Melinda Stuart.
As you are probably aware, MVVA's plan for the arch grounds, illustrated below, calls for removal of Washington Avenue east of Memorial Drive to the riverfront and extension of the park to the south face of the Eads Bridge. Although one of the top goals of the City+Arch+River Design Competition was to improve connections, MVVA's plan will effectively create a blockade at the south end of Lacede's Landing. While I am always an advocate for better pedestrian realms, and of course there is the MetroLink at the Eads Bridge, the fact remains that many come and go to Laclede's Landing by car. 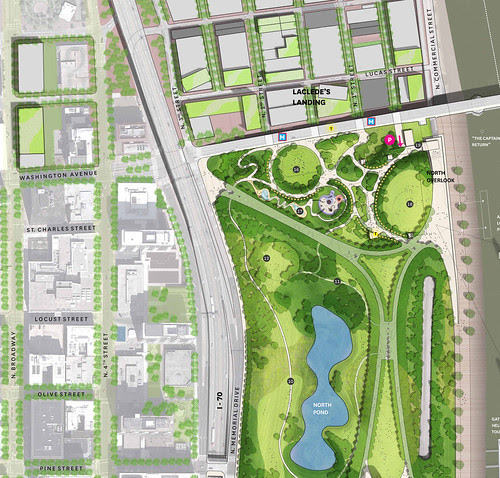 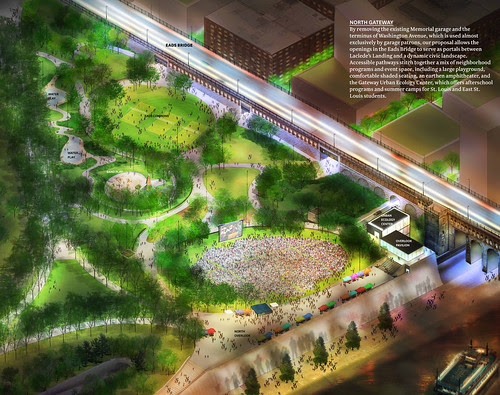 Not only does MVVA's plan block access along the Washington Avenue corridor to the riverfront for autos, but the proposed new "Urban Ecology Center" that would be built largely within the Washington Avenue street right-of-way would block direct access to the river for pedestrians and cyclists as well as create a visual barrier for all. The design narrative states that people would be able to access the riverfront via an elevator within the Urban Ecology Center. This is good to provide a vertical means of accessibility, but bad for all when the building happens to be closed. I wonder how the NPS will feel about people dragging their bikes through the building?

The placement of the ecology center and providing access and usable spaces at the lowest level, essentially at the top of the levee will have some technical issues as well. According to the photos below that I took in June 2008, they could be inundated by flood waters. 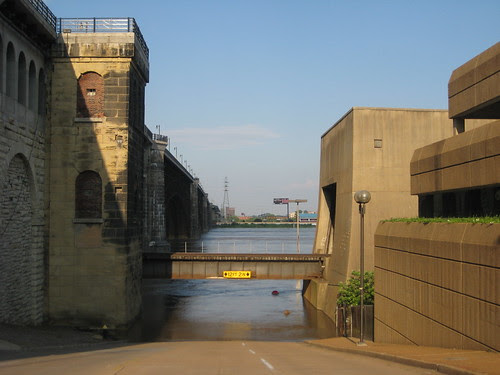 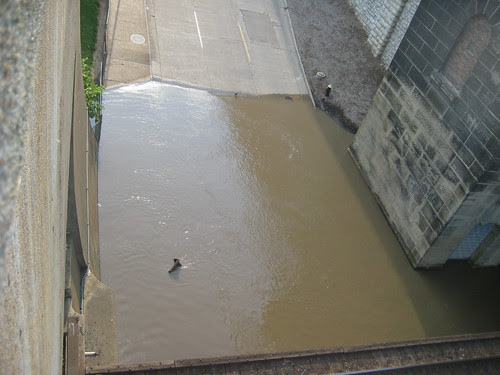 High water during the the flood of 2008. 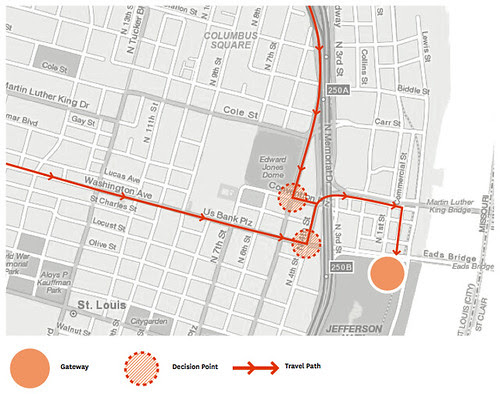 The traffic pattern proposed by MVVA for visitors coming to the north end of the Arch is far from intuitive, and for those coming from the south or west, downright confusing. This same singular path would remain as one of the few remaining ways to access Laclede's Landing by car. 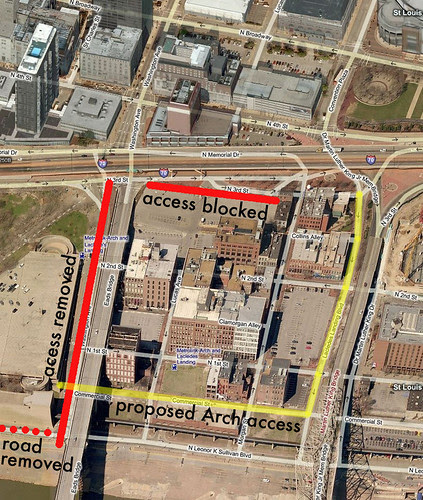 The proposed Arch access and default Laclede's Landing access would be the north edge of the Landing along the MLK Bridge. Access to a re-built new north Arch parking garage is proposed to be Commercial Street, which is basically a glorified alley. The few original buildings face their backs to the "street". 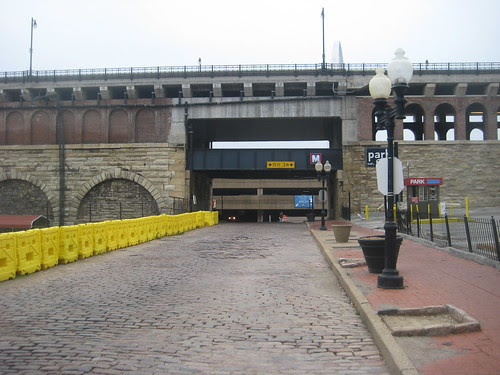 First and 2nd Streets on Laclede's Landing would be blocked at the Eads Bridge creating dead end streets south of Lucas. The demolition of the Switzer Building on First Street, to the left of the yellow barricade in the photo above, has left that block lifeless with no building frontage. Second street retains half of its original buildings but unfortunately faces a parking lot to the west. These vacant lots failed to draw development of new in-fill buildings during one of the best real-estate markets in history that ended a few years ago. Dead ending these blocks would surely doom them to permanent desolation. 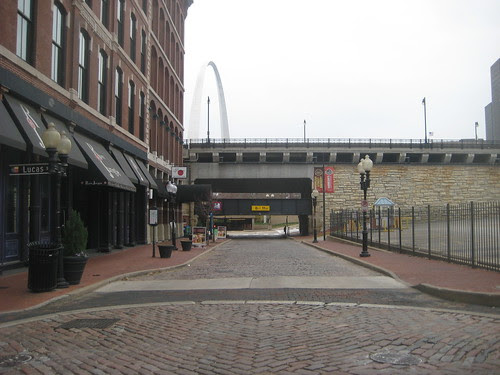 Some say that these two blocks could just be turned into pedestrian streets. Really!!, pedestrian streets? We tried that along with many other communities across the nation and the majority failed miserably. Lets face it, Laclede's Landing has been struggling for over 25 years largely due to its isolation. The galleries and cute retail stores all closed or moved elsewhere not too many years after opening in the early 1980's. What's left is largely the nightlife scene: bars, a few restaurants, the casino, offices, oh and the creepy wax museum. Removing Washington Avenue and access to Laclede's Landing from the south would be the equivalent of kicking it in the teeth when its already down. 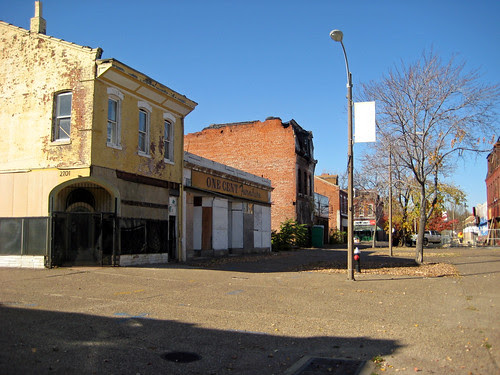 The 14th Street Mall was created with the intent to revitalize the street but ended up as a virtual ghost town as did pedestrian streets almost everywhere. Fortunately 14th street has recently been re-opened to traffic and its buildings newly renovated. Laclede's Landing already has the feeling of a district on life support, hopefully during the 90 day design refinement process of MVVA's concepts now over half complete intelligent decisions will be made not to pull the plug on Washington Avenue and the Landing.
Posted by Vanishing STL at 1:05 PM

Yeah, the MVVA plan is truly a clusterf***.