At Monday evenings Preservation Board meeting, the board approved the Robert's Brothers proposal to demolish buildings at 919 & 923 Locust, and proceed with their proposed redevelopment which will feature an Indigo Hotel. What remains to be seen though is what will be built on the site of the demolished buildings. Previously the Robert's Brothers had proposed leaving the corner of site at the intersection of 10th & Locust open for a new semi-circle driveway in front of the new lobby structure.

At Monday's meeting however, Virvus Jones of The Robert's Companies and Mike Killeen, the architect for the project presented a revised version of the proposal. The new version has the driveway covered by a roof and the facade of the new structure continuing to the corner of the intersection along Locust. There would be an opening in the facade from the Locust sidewalk to the covered driveway area, and along 10th street the structure would be completely open. While this is an improvement over the initial proposal, it still contains the unnecessary driveway, which leaves the entire 10th street side of the project dedicated to the automobile.

Driveways could stretch from St. Charles Street all the way to Locust

During Q & A after presenting to the board, Virvus Jones explained that parking for the hotel would be had at either the 9th Street garage or the Renaissance garage, but that they did not really expect many cars... so why build a driveway in front of the hotel entrance? Prior to voting, several board members expressed concern about the driveway (having seen photos I supplied of Indigo Hotels in other cities without driveways in front). Mary One Johnson however called the large covered driveway at the Renaissance "elegant"! While the Robert's Companies are not bound by law to return to the board with a final design, there seemed to be some indication that might do so voluntarily.

The "elegant" covered driveway at the Renaissance

After the meeting, Mr. Jones thanked me for my input, and agreed that more retail along 10th Street in place of the driveway would bring more revenue to the project. He indicated that he would talk to the Roberts about the possibility of not doing the driveway.

Street. There would be some additional storefront and demising walls needed, but the Driveways do not produce rent income. Also, since the commitment has already been made to roof over the entire site, there is not much added cost to change the driveway space to additional retail. It would simply be a matter of moving the curved glass wall out to 10thadditional retail revenue would outweigh this nominal cost. The Robert's have already included retail in their plan, and have the opportunity to build one of the more "urban friendly" Indigo Hotels in the country if they make the right decision and build more retail instead of an auto oriented entrance.

Posted by Vanishing STL at 12:35 PM No comments:

Just a few weeks after the announcement that yet another parking garage will be built Downtown on the site of the current US Bank plaza/driveway at 7th & Locust, The Roberts Brothers are proposing a similar but smaller driveway/plaza cutting away the corner of 10th & Locust just three blocks west.

US Bank Plaza at 7th & Locust

The proposal includes demolition of two buildings at the northeast corner of the intersection. 923 Locust at the corner has a false stucco and half timbered exterior that has been on the building for several decades, and 919 Locust, a four story structure with a buff brick facade which was built in 1916. City records list the corner building as being constructed in 1890. Several cast iron columns which appear to be original are visible at the ground floor.

An Indigo Hotel, which is the same flag that the Roberts are using to re-vamp the MCM Days Inn at Lindell & Euclid, would occupy the historic Scruggs Vandervoort Barney Annex at 917 Locust, the small Moderne faced building at 913 and a new two story structure containing lobby would be built occupying the 919 site. Most of the corner 923 site however would remain un-built and occupied by a circle drive off 10th Street.

My issue with this proposal is not preservation of the buildings, it is about urban design. Neither building is of spectacular merit, and while the building at 919 adjacent to what would be the hotel tower in the Scruggs Annex is an attractive building, it's floors are far out of alignment with the Annex, which would make it difficult to tie the buildings together. The issue though is about holding the corner of the intersection in a dense central business district environment. If the proposal called for a new structure built to the corner of the intersection, I would not have a problem with it.

The western half of the CBD of Downtown St. Louis has been so badly eroded by parking lots, plazas, driveways, and needless building setbacks (at&t buildings) that only one other intersection between 8th and Tucker besides 10th & Locust retains four buildings built up to the corner at the intersection. This occurs at 9th & Washington (The Old Post office was historically set back on all sides). This proposal would continue this erosion and set bad precedent for future developments.

The proposal is up for review by the City's Preservation Board at their monthly meeting next Monday, October 27th at 4:00pm. Preservation Board meetings are held at 1015 Locust (one block west of the proposal site), suite 1200. Meetings are open to the public and anyone can sign up to give testimony for or against any agenda item. I encourage anyone with an opinion about this to show up and speak.

The developer will likely claim that Indigo is requiring the driveway in front of the hotel. Like many similar hotels in it's class, Indigo's new-build prototype does have a driveway at the entrance, yet in several cities Indigo Hotel's have opened in existing structures, and in one case a new building, which are all built up to the property line without a driveway in front of the entrance. These include: Atlanta; Chicago; Dallas; Nashville; Rahway, New Jersey and Ottowa, Ontario. 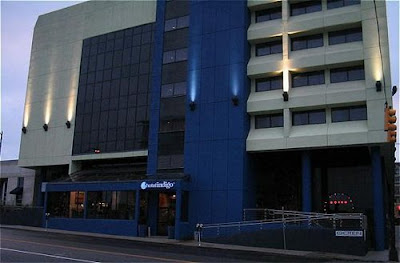 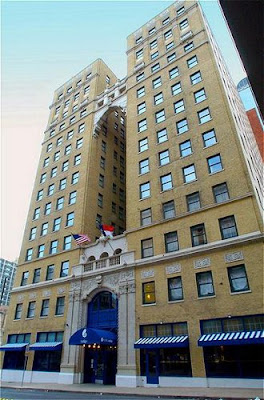 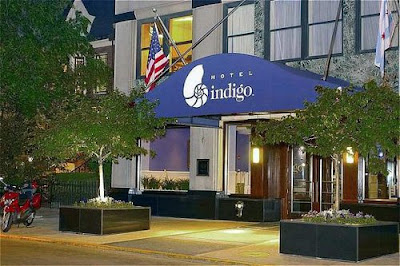 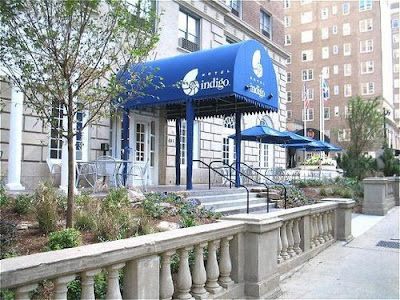 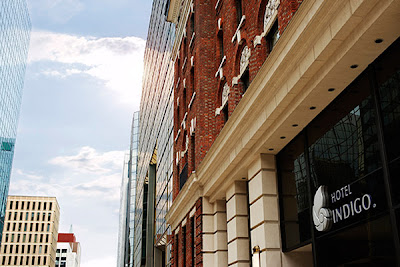 Don't get me wrong, I would love to see Indigo go into this location, as it would bring desperately needed activity to Locust Street. I feel however that the hotel can be done, and in fact would be better without cutting out the corner of the block for a driveway.

It was a little after 5:00 exactly four years ago as I was sitting in a late afternoon meeting in what was then Paric's office at the corner of 9th and Olive when the pounding started. The floor tremored slightly under our feet. It was the beginning of the demolition of the Century Building. The pounding continued seemingly non-stop for three and a half months until the afternoon of February 3rd, 2005 when the final section, the center wing of the E shaped building which had been reduced to what looked like a giant game of Jenga, came crashing down. The loud rumble and earthquake like jolt inducing a few shrill screams through our 6th floor office in Frisco Building across the street.

Four years later several floors of the 1000 parking spaces that were claimed to be needed to serve the Old Post Office and surrounding buildings sit empty on a regular basis. Although it was announced with great fanfare several months ago that Schnucks will open in the ground floor space, construction has yet to begin on the build-out. The Old Post Office itself, which we were told would be activated day and night by throngs of new Webster University students, as well as retail and restaurant spaces throughout the ground floor reminds me more of the days in the late 1980's after the last renovation had long fizzled.

The East entrance is closed due to to perceived security issues. Webster does occupy the entire 1st lower level, but there does not seem to be the level of activity one would expect at a college satellite campus. While the Library and Pasta House provide an activated north end, the entire south half of the first floor was turned into office space, which adds nothing to Olive Street and leaves the enlarged plaza area (which took away valuable street parking) dead and empty. Apparently the building management does not want anyone hanging around on the interior either since the giant atrium space in the center of the first floor contains not one, that's right, zero! furnishings. Not one bench, not one table... please pass through and get out!

Ironically, on this fourth anniversary of the destruction of the original half of the flagship Scruggs Vandervoort Barney department store, the Post announced that this week Centene is to start demolition of the first Vandervoort's branch store in Clayton, the Harris Armstrong masterpiece known to most in my generation at the Library Limited Building. On the west half of the block, in stark contrast to the lifelessness of the 9th Street Garage, final touches are being completed on The Syndicate. Like the Paul Brown, The Syndicate renovation was designed to accommodate most if not all of it's parking needs within the existing building.

So four years later, we must ask ourselves: Is the Old Post Office District better off today? Was the "garage mahal" and the destruction of the Century really needed?
Posted by Vanishing STL at 8:11 PM 1 comment: