Only 1 CORTEX Building on Preservation Board Final Agenda 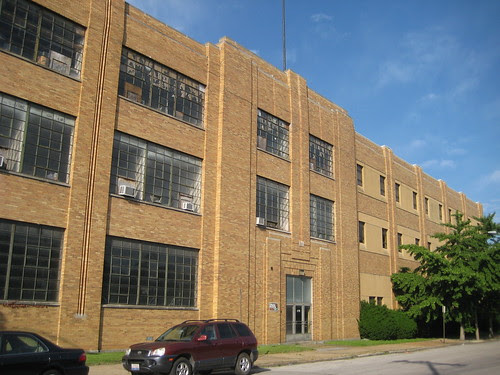 When the final agenda for today's Preservation Board meeting was posted on Friday, I was surprised to see that only one of the three CORTEX buildings that I posted about last week will be considered this afternoon for a recommendation to be listed on the National Register of Historic Places. The Cultural Resources Office is recommending that a report should be sent to the Missouri State Historic Preservation Office stating that the the Western Electric Southwestern Bell Telephone Distribution House at 4250 Duncan is eligible for listing on the Register under criteria A and C. It is unclear why the other two buildings are not on the agenda.
Posted by Vanishing STL at 6:30 AM No comments: 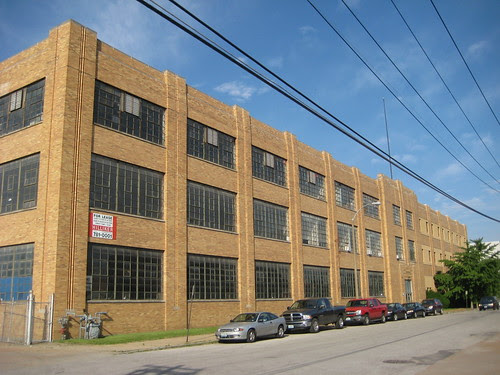 Several weeks ago I heard that someone is in the early stages of putting together a three building historic tax credit project in the CORTEX district. This would be a complete reversal of what has been the mode of operation for the district since it began development in 2005. The master plan for the district which was approved by the Board of Aldermen as part of the areas redevelopment plan had shown demolition of almost all historic buildings for construction of new lab buildings, boitech incubators and office buildings. 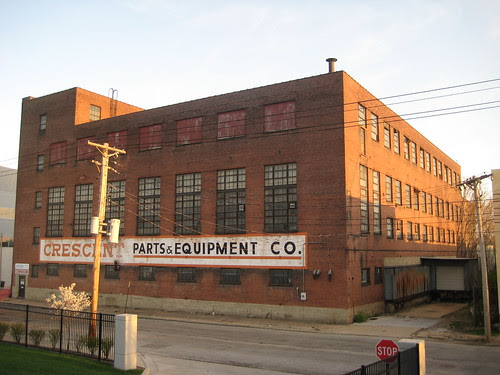 This month however, what I had heard is proving to have strong potential to come to fruition. On this months Preservation Board Agenda three CORTEX district buildings are up for consideration as new nominations to the National Register of Historic Places. They include the Post Dispatch Rotogravure Printing Plant at 4340 Duncan (photo above), the Western Electric-Southwestern Bell Telephone Distribution House at 4250 Duncan (top photo) and the J.I. Case Threshing Machine Company Branch House at 4260 Forest Park (Google streetview below).

For the past 6 years, since construction of the tilt-up concrete and glass CORTEX building at the southwest corner of Forest Park and Boyle, the Cortex has had mixed success in luring biotech companies to the district. In early 2007, Solae began construction of a their new headquarters building at Duncan and Boyle which required demolition of the O. Morse Shoe Company which had significant Art Deco detailing. 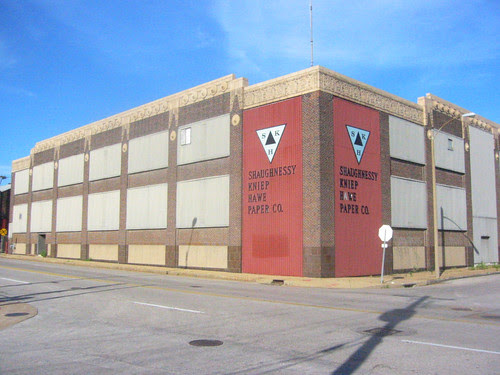 The O. Morse Shoe Company building which had most recently housed SKH Paper Company was demolished for the new Solae headquarters.

Since then however there has been little development activity in the district except for acquisition of land and buildings for future redevelopment. Off and on has been talk of luring other potential companies to the area, but nothing else has moved forward. Although the economy is in a slow recovery from the Great Recession, lending for expensive private commercial development is still difficult to obtain. It seems the leaders of CORTEX have realized that the economics of historic rehabilitation make a lot of sense, especially in the current state of the economy. 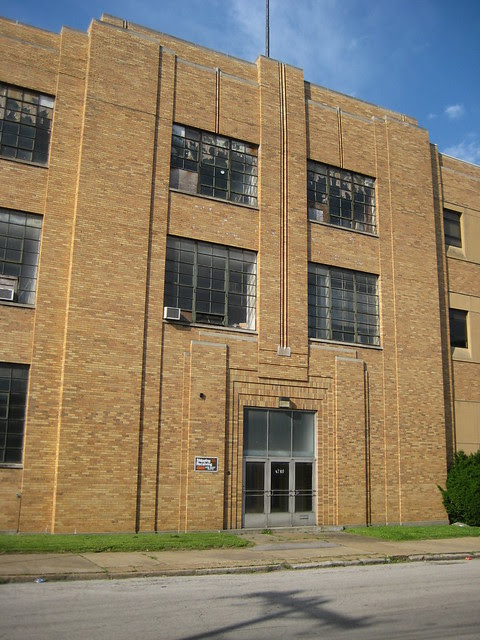 The entrance to 4250 Duncan, which is a concrete framed building that has large open floor plates and is well suited for adaptive re-use for offices or biotech lab space. The reuse of historic structures for biotech incubator space has precedent right around the corner at Sarah and Forest Park, where the Center for Emerging Technologies is housed in two rehabilitated structures. Some of the tenants in the CORTEX building started their companies in CET's incubator buildings. Hopefully the nomination of these three significant historic structures to the National Register and the accompanying historic tax credit incentives that come with this designation we will see the renovation of the buildings for new uses fitting with the districts goals. 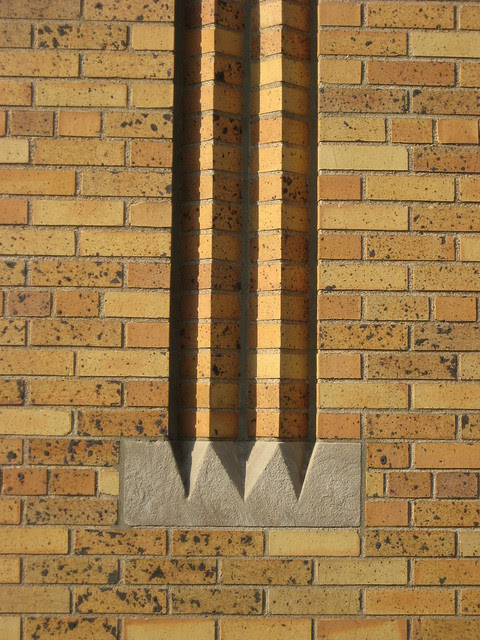 A simple yet beautiful detail of 4250 Duncan.
Posted by Vanishing STL at 6:30 AM 1 comment: 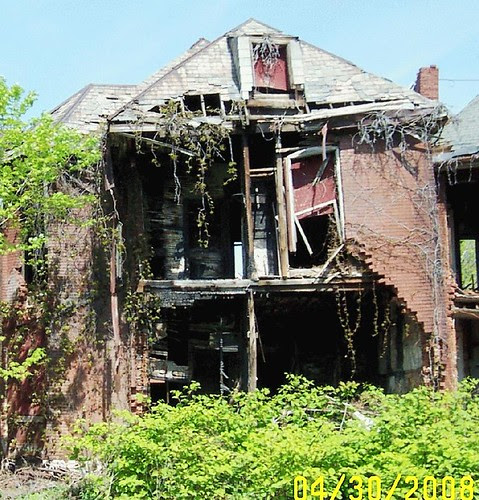 Three years ago many of the large stately homes of Dick Gregory Place, in the Greater Ville neighborhood were on their last legs. Several had literally begun collapse as years of abandonment and exposure to the elements had taken their toll. The home above at 1702 Dick Gregory had been abandoned for over 20 years (date stamped photos from Geo St. Louis). Unfortunately this scene is all to common in several North St. Louis neighborhoods, with the typical ending of demolitions and more vacant lots. 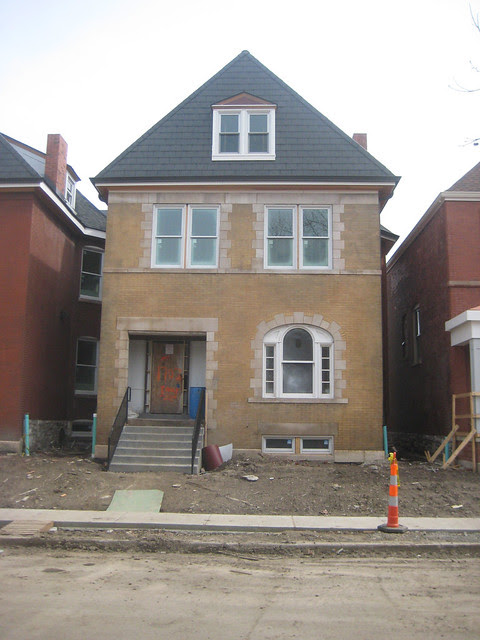 The ending of the story of Dick Gregory Place however has defied all odds. Instead of demolition, the historic houses are all nearing completion of extensive renovations and re-building as part of a $13,000,000 project that will result in 32 units of affordable housing in renovated buildings plus four additional units in two new buildings and commercial space on Martin Luther King.

This incredible project is being developed by Northside Community Housing Inc. with assistance from RHCDA. The complex funding package is consists of both Missouri and Federal Historic Rehabilitation Tax Credits, Missouri Low Income Housing Tax Credits, HOME funds, American Recovery & Reinvestment Act funds as well as other funding sources. More information about the development can be found in this Northsider article. Also check out the nomination for the Wagoner Place Historic District, which encompasses Dick Gregory Place and four single block streets to the west of Dick Gregory. 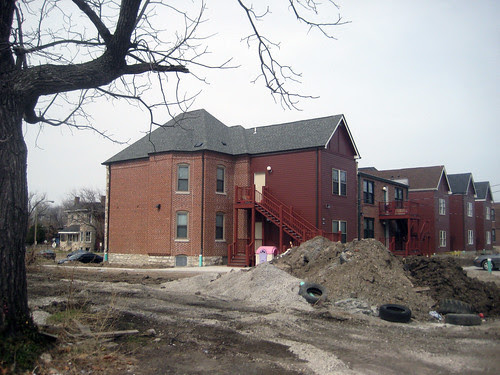 In a reversal of the common trend of converting two-family buildings into single family homes, several of these large homes have had additions at the rear to accommodate conversion to two apartments. 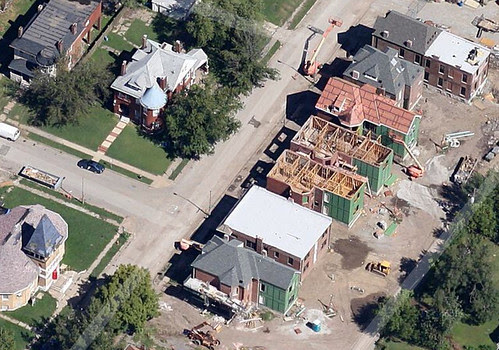 This Google aerial view shows the extent of the substantial rehabilitation of the historic houses and the rear additions added to convert some of the houses to badly needed affordable family apartments. Unlike much affordable housing in multi building complexes that all look the same and stand out from their surroundings, residents of these beautiful historic buildings will be able to take pride in a true neighborhood environment. 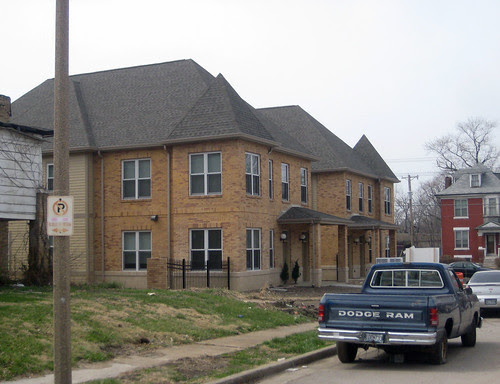 The scale of the two new buildings at the corner of Marcus & Aldine, each with two apartments, fits well with the existing historic buildings in the district without being replications. 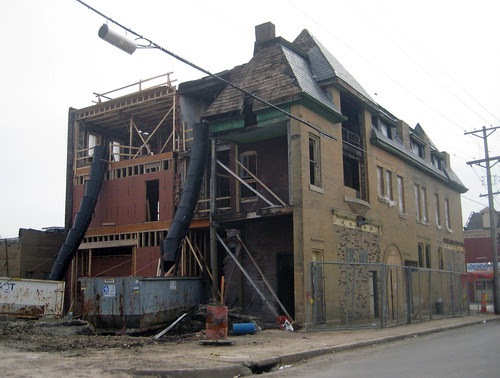 This beautiful corner building at Martin Luther King & Marcus will have commercial space on the first floor along MLK and apartments above. 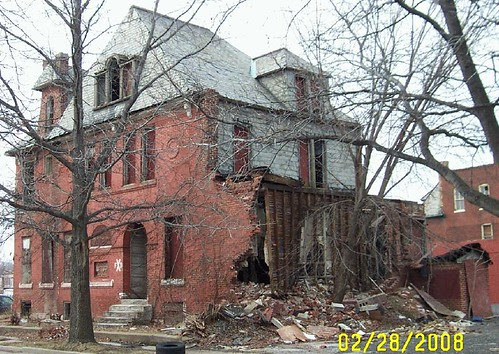 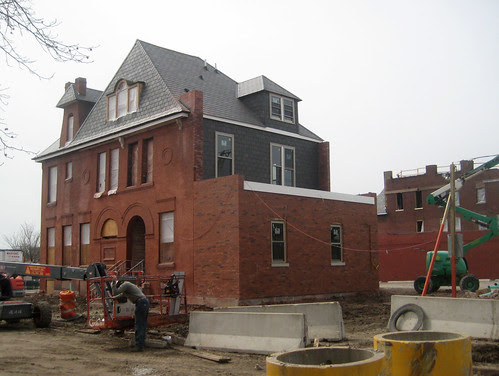 Before and after at a large two family dwelling at the corner of Martin Luther King & Dick Gregory Place. I'm not sure if the Schoemehl pots will be removed to re-open the street. More of my photos of Dick Gregory Place and adjacent areas can be seen be seen here on Flickr. 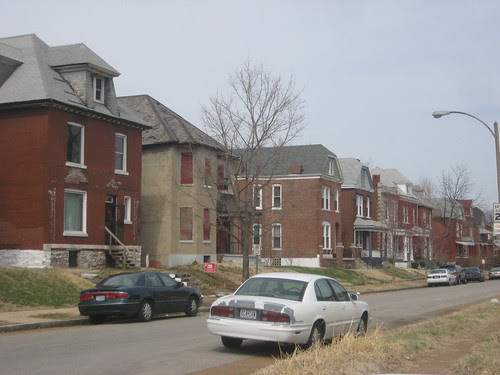 Just across the alley from Dick Gregory Place to the east is Cora Avenue. Compared to the former conditions of Dick Gregory, this street of large homes has managed to remain remarkably intact. 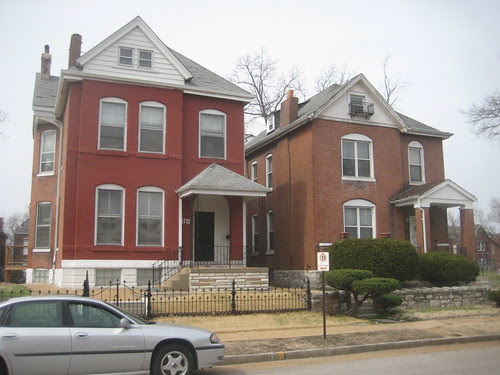 While there are a few boarded homes on Cora, most are occupied and very well maintained. 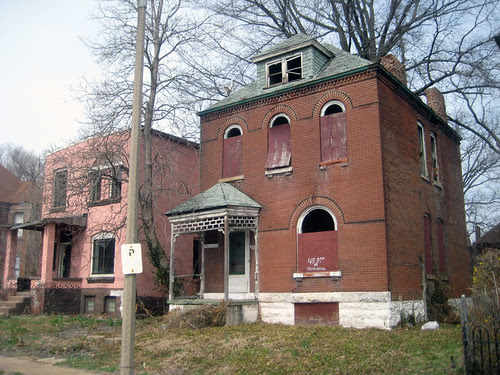 The blocks of Cote Brilliante and Aldine east of Cora however are riddled with vacant lots and vacant homes. Sprinkled in between are a few remaining owner occupants. The boarded homes for the most part though are still in salvageable condition, and would not even require the extensive re-building that occurred on Dick Gregory Place. The area is part of the local Ville Historic District which was expanded in 2006.

RHCDA has looked at the possibility of doing a second phase of the Dick Gregory Place project including some remaining properties on Dick Gregory as well as properties in the blocks to the east. If Jay Nixon and the Missouri Legislature have their way thought, this second phase will not be financially possible. As part of Nixon's crusade to slash tax credits, a new rule which had been recommended by Nixon's tax credit commission and now making its way through the state Senate would not allow developers to use both Missouri Historic Rehabilitation Tax Credits and Missouri Low Income Housing Tax Credits on the same project. This short sighted regulation would be a cold slap in the face to North St. Louis as it not only would make phase two of Dick Gregory infeasible, but would make rehabilitating much of the North Side extremely difficult due to deflated real estate values at the same time that several new historic districts are in the works.
Posted by Vanishing STL at 6:30 AM 3 comments: 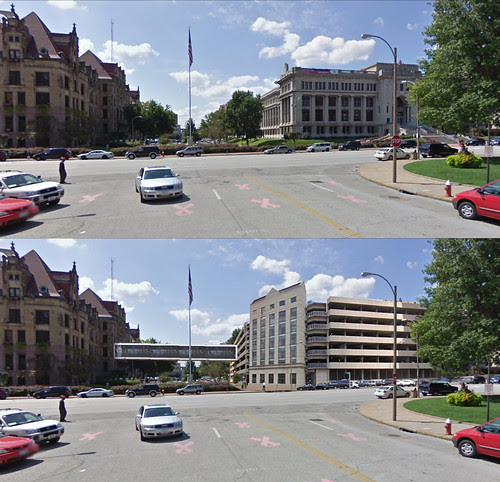 The City of St. Louis today is poised to announce the newest enhancement to the ongoing redevelopment of Downtown St. Louis. The new 14th street garage will replace the former Municipal Courts building on Market Street west of City Hall. The Municipal Courts building, which will be demolished, has been vacant since the courts moved to the Mel Carnahan building (the former federal courthouse) at the southeast corner of Tucker & Market.
The new garage will be a good complement to the recently completed municipal garage at the northwest corner of Tucker and Clark. The new 14th Street garage however will have the added benefit of being attached directly to City Hall via a sky bridge. 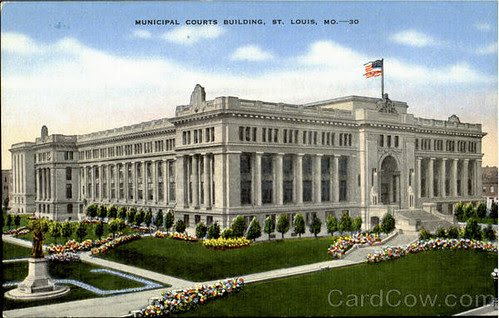 The former Municipal Courts building on Market Street
By now you may have figured out that this is a joke, but in all seriousness, crimes against our City's built environment of this nature have happened several times before. Only continued vigilance and taking real action agains threats to historic building when they occur will prevent these scenes from continually repeating.
Posted by Vanishing STL at 8:30 AM 3 comments: