Great article about the San Luis in the Vital Voice 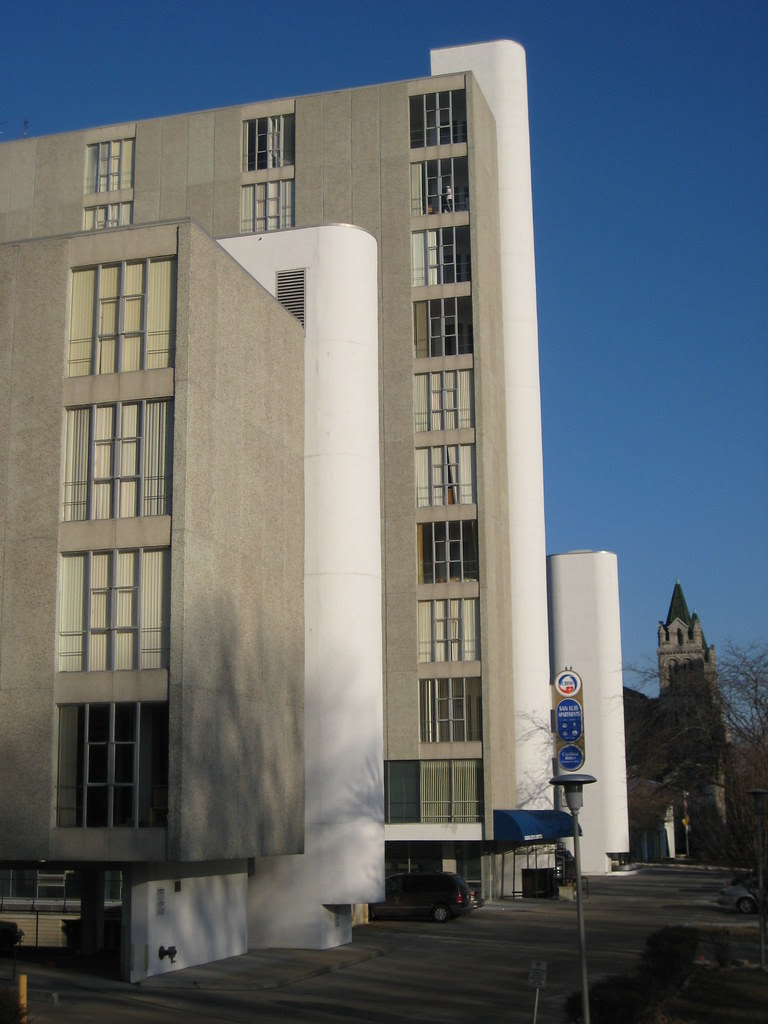 The most recent issue of the Vital Voice contains a great article by Lindsey Derrington of Landmarks Association concerning the endangered San Luis Apartments (formerly the DeVille Moter Hotel). The article, which can be read online, thoroughly covers all aspects of the topic and is well worth a read.

Dick Gregory Place on the brink of devestation! 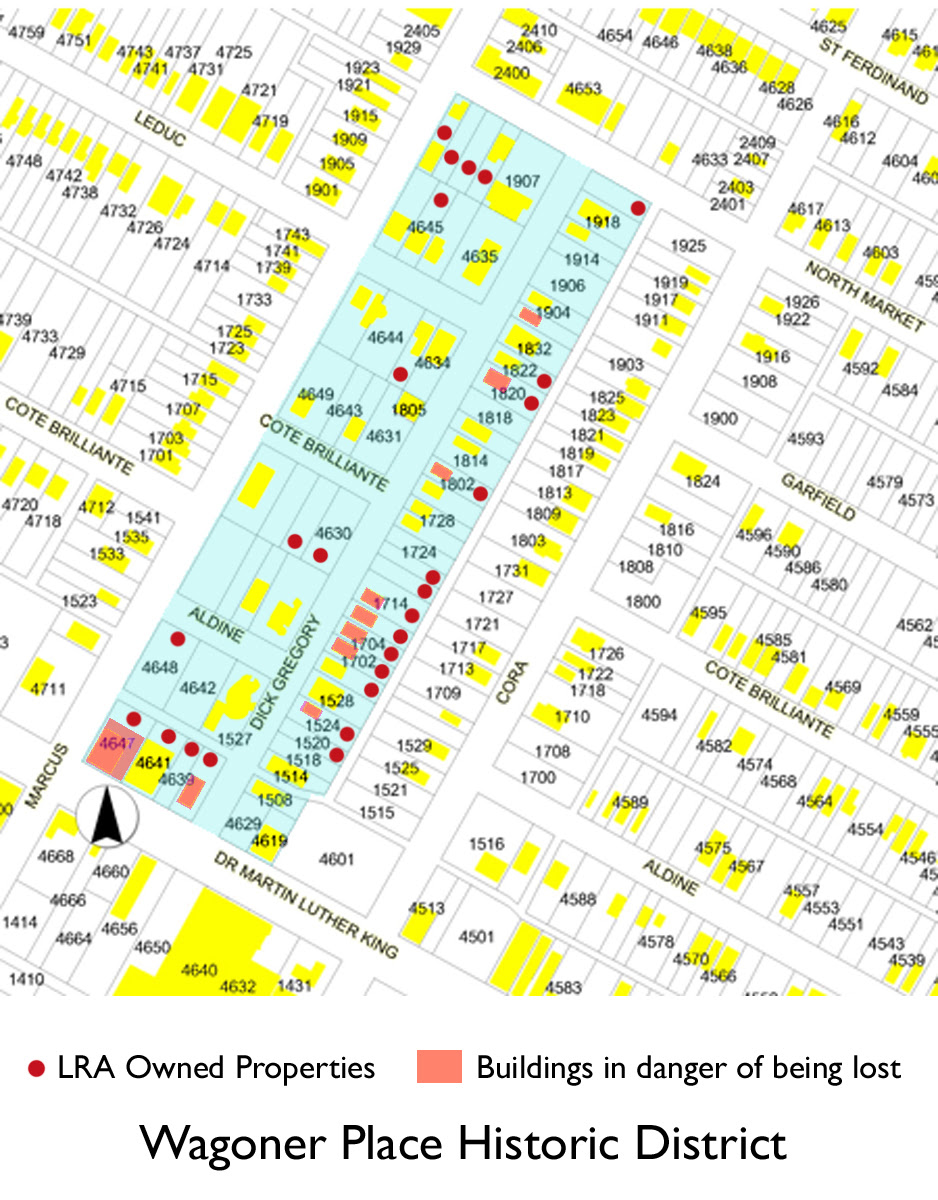 The Wagoner Place National Register Historic District is less than a year old, but the real question now is will it survive. Almost half of the single family homes on Dick Gregory Place are not only abandoned, but are in such a severe state of decay that without intervention within the next year or so, they will likely not survive. 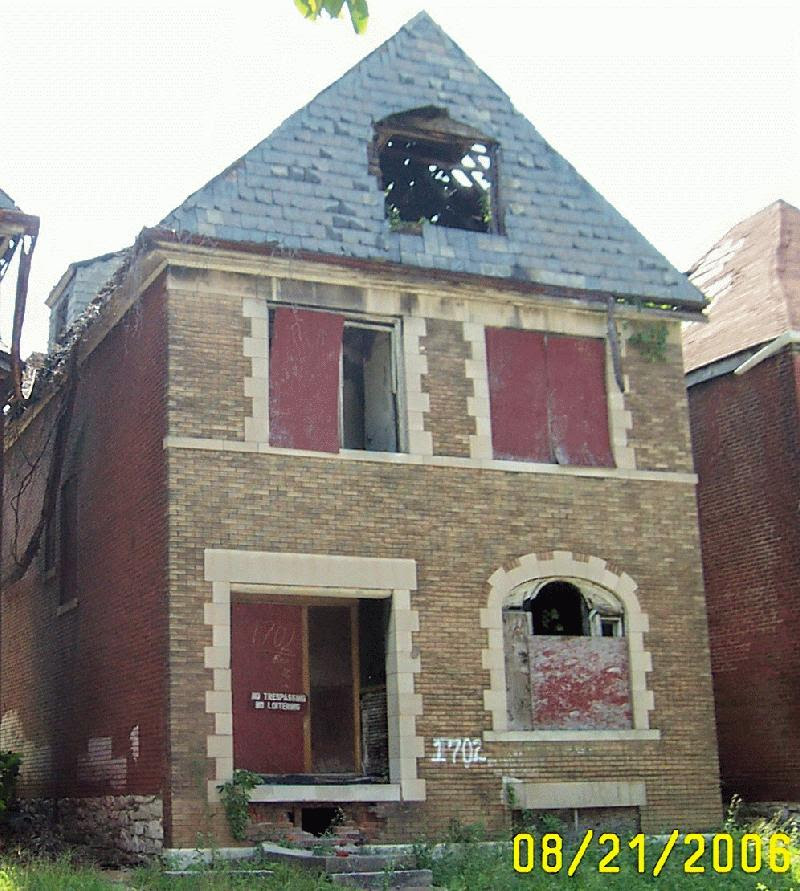 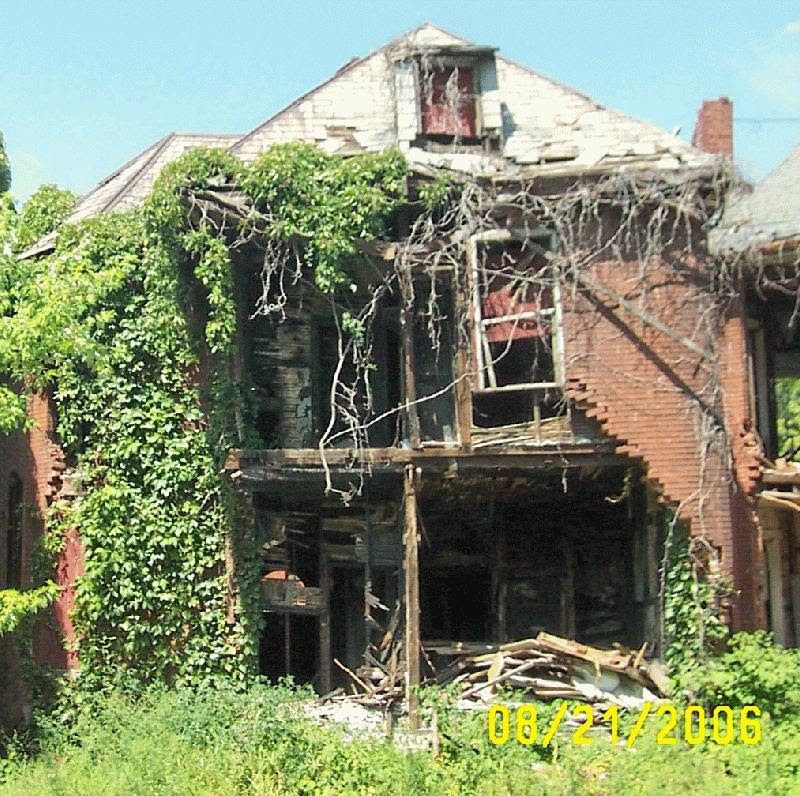 1702 Dick Gregory Place - rear
The Wagoner Place Historic District was listed on the National Register on December 19, 2007. The district is composed of the 1700-1900 blocks of Dick Gregory Place running north from Martin Luther King, and single block (4600 block) of five streets to the west of Dick Gregory: Aldine, Cote Brilliante, Leduc, the north side of MLK & the south side of North Market. The agenda from the April 2007 Preservation Board meeting where the nomination process began can be found here. 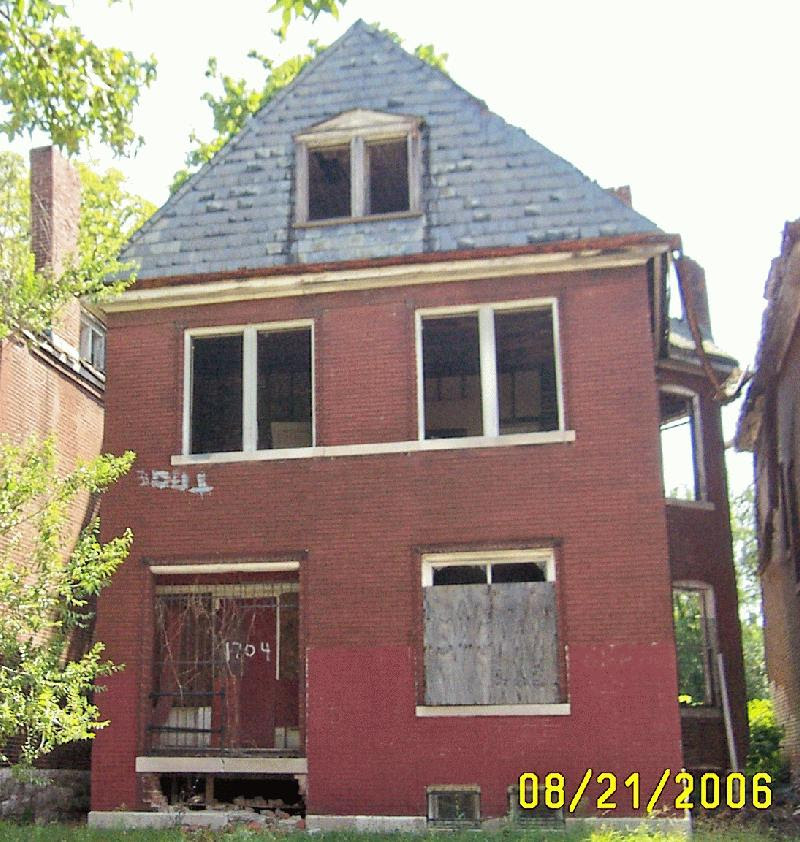 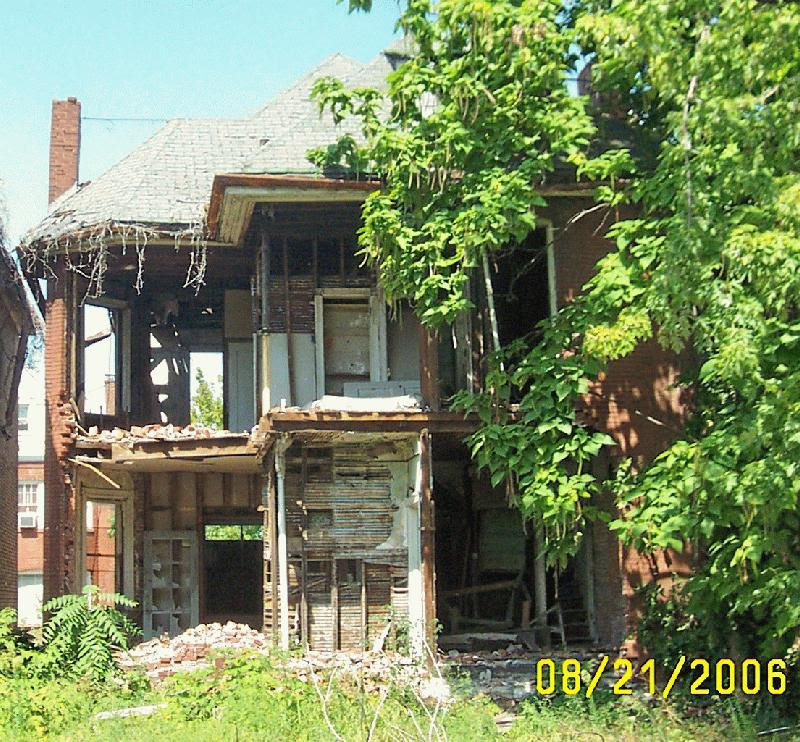 The home below doesn't look too bad from the front, or initially from the rear. Then I noticed that the stair visible through the open door is collapsing, indicating that there is more serious damage than is immediately visible from the exterior. 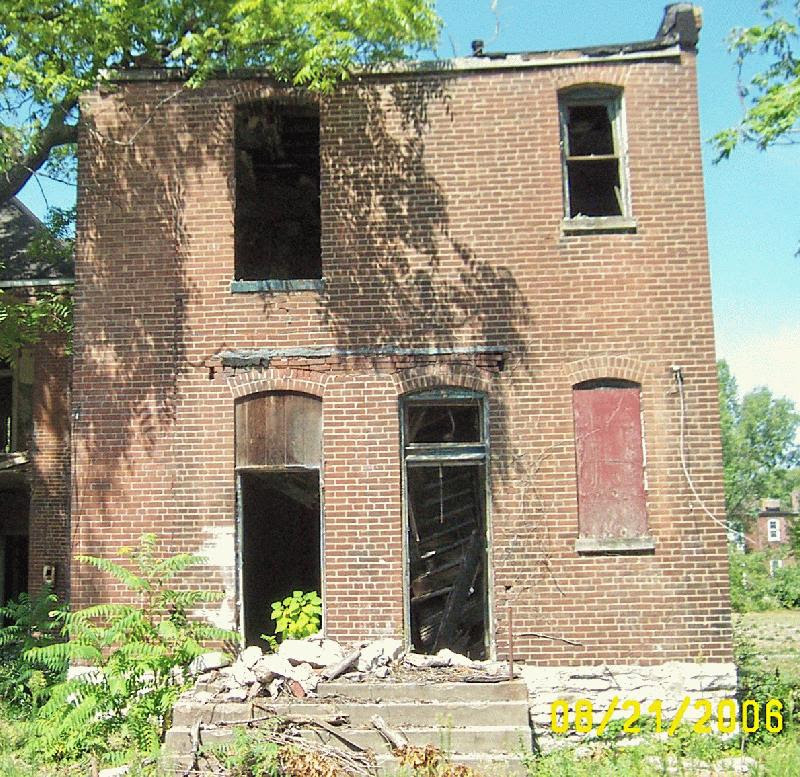 1710 Dick Gregory Place - rear
In July of last year, two of the buildings on Martin Luther King Dr. were targeted for demolition. The doctor's building at the northwest corner of Dick Gregory and MLK, originally built as a two family house was almost lost as demolition began at the rear of the building without a permit. Luckily a resident reported the work, and it was stopped. The Preservation Board denied the application made by the neighboring church which wanted to demolish the building for parking. The agenda from that meeting item can be found here. The building is now owned by LRA, and the questions remains as to what will happen to it. 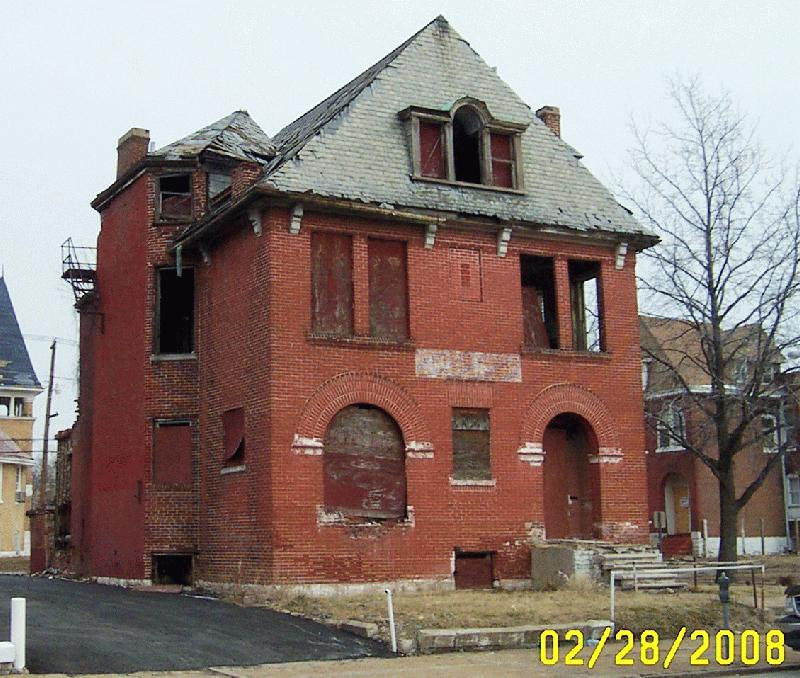 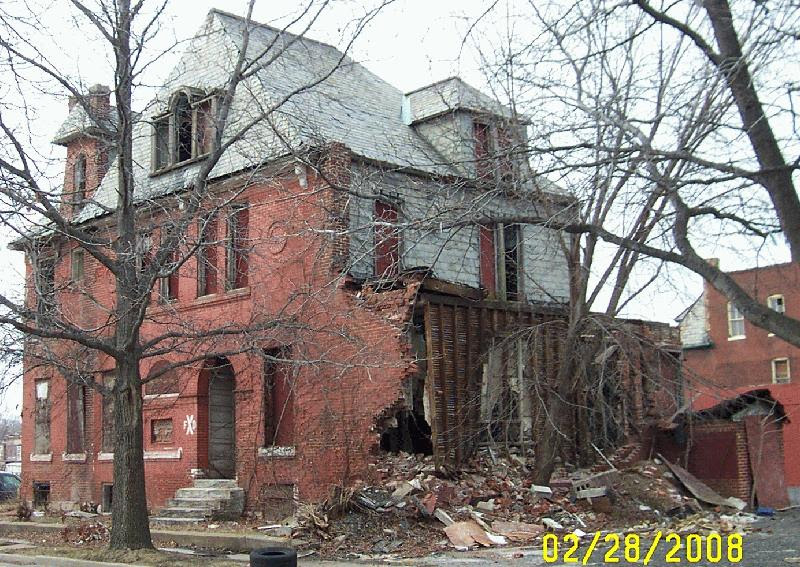 At the same July 2007 meeting of the Preservation Board, the beautiful three story building at the opposite end of the same block at the intersection of MLK and Marcus was listed in a request to demolish 33 buildings scattered through the larger Ville Local City Historic District. The request was made by 4th Ward Alderman Sam Moore. The agenda for this item can be found here.

One of the larger buildings in the immediate area, the storefront and apartment building is an extremely important asset to both the local and (then pending) national districts, and rightly so the board ruled against demolition. Several other demolitions were allowed due to the sever condition of some of the buildings. Again the future of this building at MLK and Marcus is in doubt. It is owned by LRA and while it is largely in stable condition, a large portion of the north wall of the third floor is missing, and with the building wide open like this, deterioration will be rapid.

With all of these buildings owned by LRA and a historic district in place, you would think that the City would want to get someone interested in taking these buildings off their hands and renovating them using historic tax credits, right? Yet I checked the RFPs on the City's web site, and there are no RFPs for this district, or in the Ville neighborhood, or in the entire 4th Ward! This is inexcusable! ... and they say the Team 4 plan is fiction??!! ... makes you wonder doesn't it. I hope I am missing something here and that someone is actually looking at putting together a plan to save Wagoner Place... but somehow I doubt it. This is one of those cases where the City needs to step in and spend a little of their demolition pot of $$ doing some desperately needed triage. Doug Duckworth recently posted a nice set of additional photos of Wagoner Place on Flickr which inspired me to do this post.

31 Days of Blairmont... and counting

If you have not have not done so already, please take a look at a month-long series by Rob Powers here at the Built St. Louis Web-log. Each day for the past month Rob has been posting about buildings owned by Paul McKee's Blairmont and several other shell companies that have amassed over 660 properties in several North St. Louis neighborhoods, many of which contain historic buildings that have been allowed to rot and decay or worse.

I bring this to attention on his site because the outright assault on buildings by Paul Mckee collectively represents the greatest threat the urban built environment in St. Louis today. Buildings are being lost on a regular basis due to brick rustling (which may be encouraged or even organized by McKee), fire, or simply collapse due to severe neglect.

Please have a look at this sad chronicle, and please contact the politicians listed on yesterday's "What Can I Do" post and tell them that this f***ing madness needs to end NOW!
For a more in-depth look at the devastation including a map of all the properties, check out Michael Allen's: World of Blairmont.