Last week I was invited to an evening tour of the Missouri History Museum's recently opened Route 66 exhibit. One of the more interesting aspects of the show was seeing the evolution of Route 66 as it was designated to travel through various parts of St. Louis over its history. This was the time before interstate highways when Route 66 and all of its travelers went right through the heart of the City. For some, Route 66 is about nostalgia, but for those of us younger than the interstate system, Route 66 seems more like mythology of a bygone era. The History Museum exhibit brings aspects of this mythology to life. 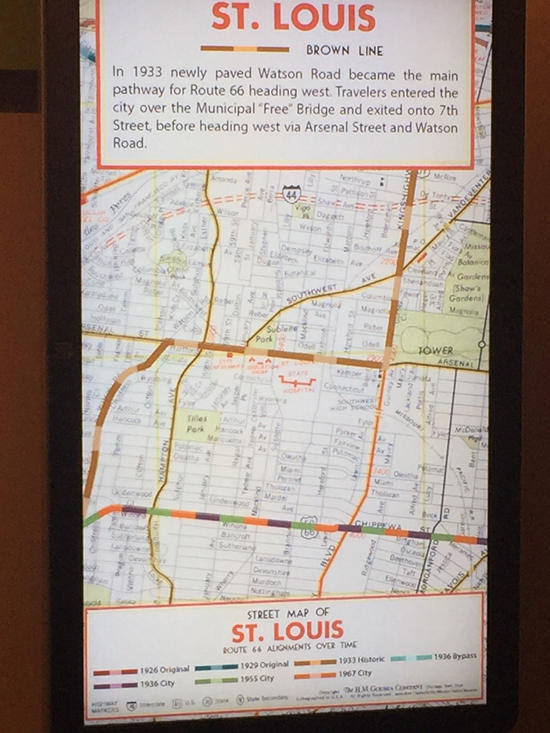 The exhibit starts off with a great interactive map that allows you to trace the various paths that Route 66 took through St. Louis. 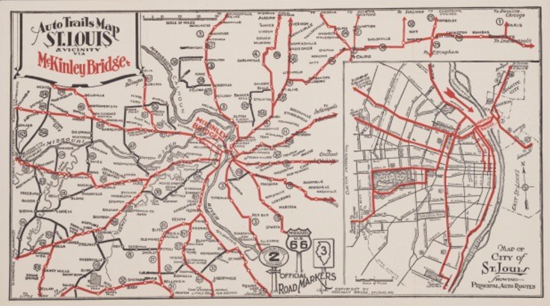 Beside the interactive map, there are several great vintage maps of Route 66 and the other major ways that people traveled through St. Louis before the interstates carved their wide paths of destruction through the City.

Since I did not get a chance to photograph the various routes on the interactive map, I found this one from route66stlouis.com by Norma Merit Bolin, who has authored two books about the Mother Road.

Throughout the exhibit you can see the many changes in the urban landscape that have occurred along the Route 66 paths through St. Louis. since the building of the interstate highway system (and before). 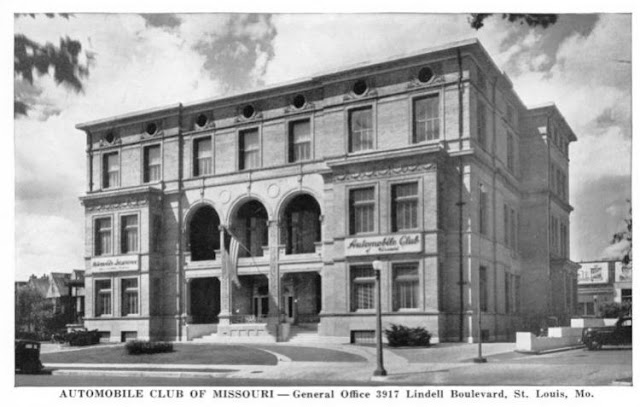 Originally built for the Columbia Club, this beautiful three story building on Lindell Boulevard was occupied by AAA of Missouri for many years before it was destroyed by fire in 1975. 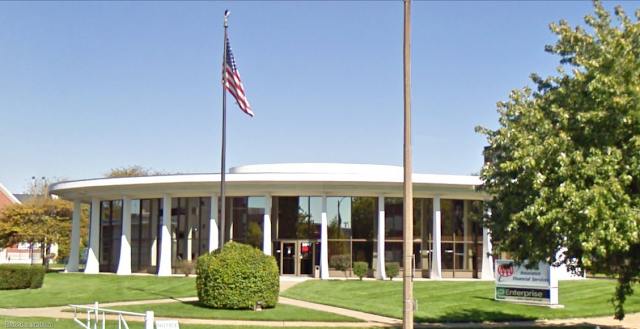 It was replaced by a modern elliptical shaped building by W.A. Sarmiento. that was threatened with demolition recently for a new CVS store. Fortunately, a compromise was reached and the CVS was built farther west of site, sparing the AAA building. 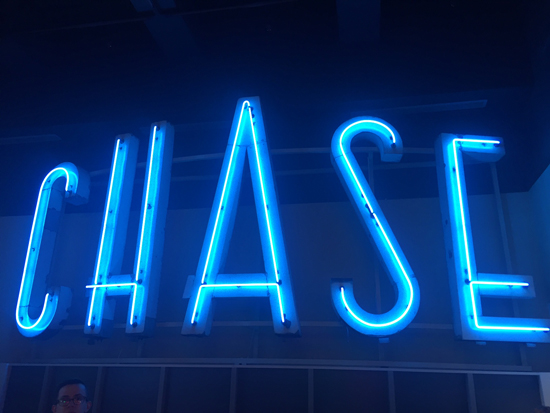 Further west on Lindell Boulevard, this amazing sign once graced the top of the Chase Hotel. It is hard to imagine today that there was a time when the future of the Chase was in doubt. After seven decades as one of St. Louis' grandest hotels, the Chase closed in 1989 after years of declining business and competition from newer hotels such as the Ritz Carleton in Clayton. The neon sign was taken down and ended up in the History Museum's collection where it sat for years until being restored for this show. Through the early 1990's there were fears that the Chase might be demolished as no plan was in sight. Fortunately with the enactment of the Missouri Historic Rehabilitation Tax Credit in 1998, feasibility of a revival was possible and the Chase was one of the first large buildings to be saved by the program in combination with Federal Historic Tax Credits. 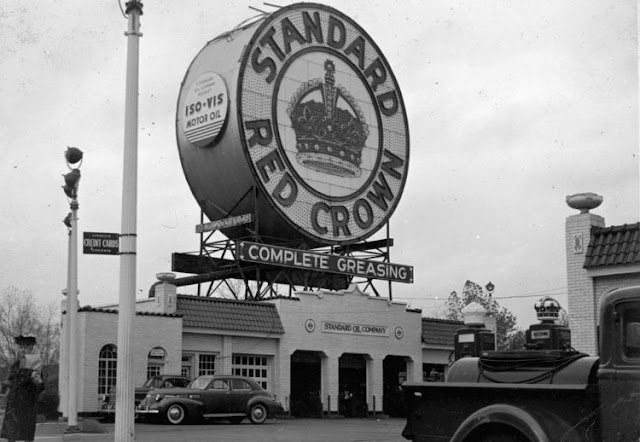 Large rooftops signs were once more commonplace around St. Louis. One of the more prominent locations was the Standard Red Crown sign at the intersection of Skinker Boulevard and Clayton Road. This sign composed of thousands of individual red and white light bulbs was eventually replaced with an internally lit plastic faced "Standard" sign, which was later changed to "Amoco". When BP bought out Amoco they apparently thought that they would not be able to switch the sign to their sun logo since rooftop signs are now technically prohibited, so the giant Amoco sign remains one of the few in active use. 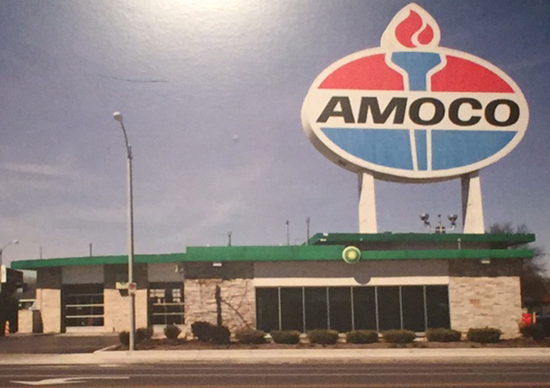 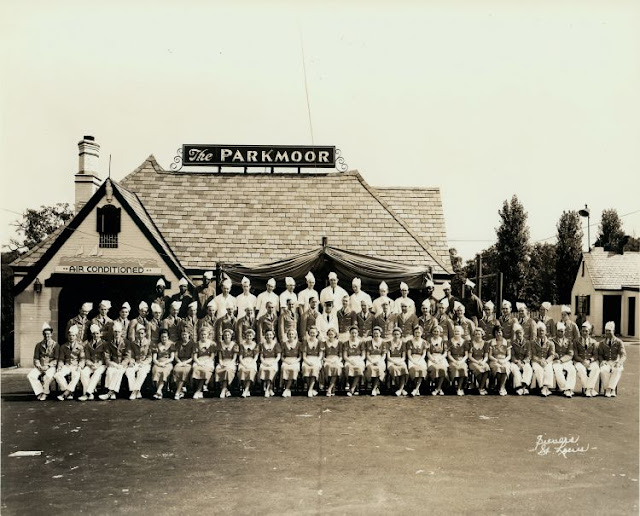 Further west on Clayton Road at Big Bend was the Parkmoor, which was the first restaurant in St. Louis to offer in-car service like you can get at Sonic drive-ins. The Parkmoor ended car service and built a new orange roofed restaurant in 1969. The restaurant closed in 1999 after being in business for over 70 years and was replaced by a Walgreens. 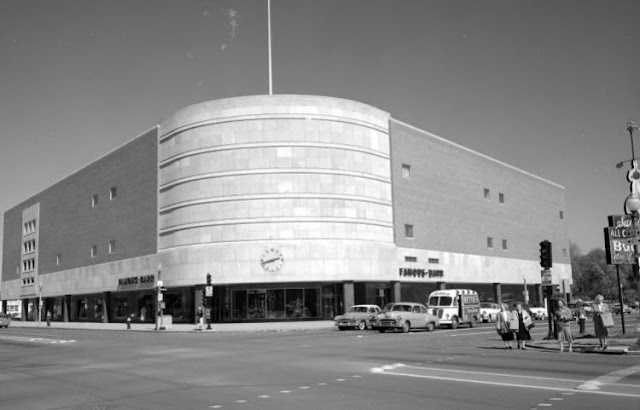 On Chippewa, which became part of the principal Route 66 after 1933, this iconic building at the northwest corner of the intersection with Kingshighway housed the Southtown Famous Barr department store from 1951 until its closure in 1992. The building was demolished in 1995 and after the surrounding community said no to the idea of a new K-mart store, the site sat vacant for several years. Eventually a shopping center containing a Petsmart, an office supply store, a Walgreens and several small retail stores was constructed on the site. 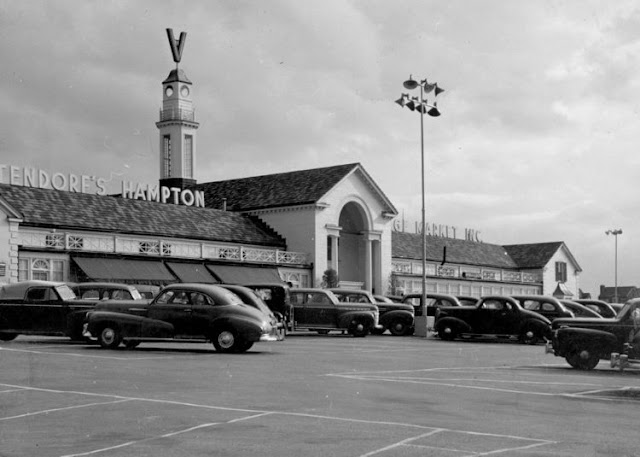 Further west on Chippewa at Hampton Village this colonial revival style grocery store sat in the middle of the parking lot about where the McDonalds is today. It was built as a Bettendorf's and later became a Schnucks. By 1991 it was demolished and replaced by a larger grocery store at the south end of the Village. 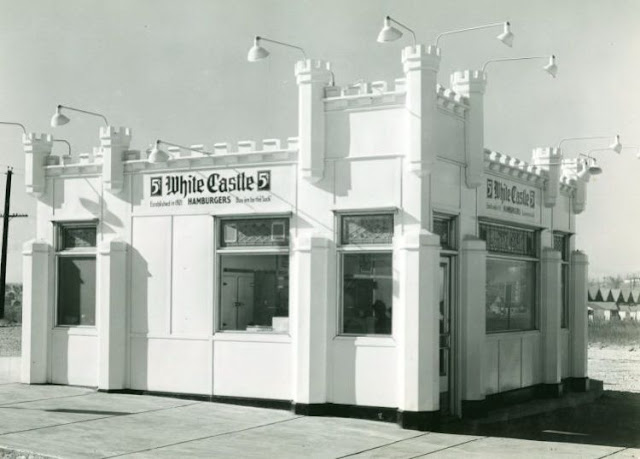 Also located at the same intersection was this early White Castle. 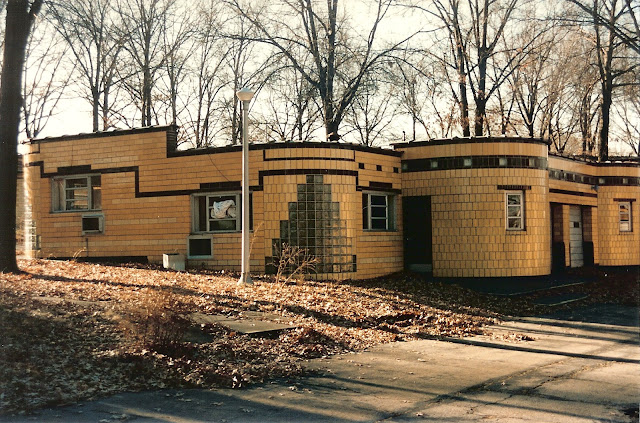 As you headed west on Route 66 through St. Louis County on Watson Road, there were several motels that popped up along Route 66. The most famous was the Coral Court, which featured streamline moderne style buildings, many of which featured individual garages. Although probably not the original purpose, these garages allowed patrons to come and go unseen, which gave the motel a reputation as a location for secret rendezvous. 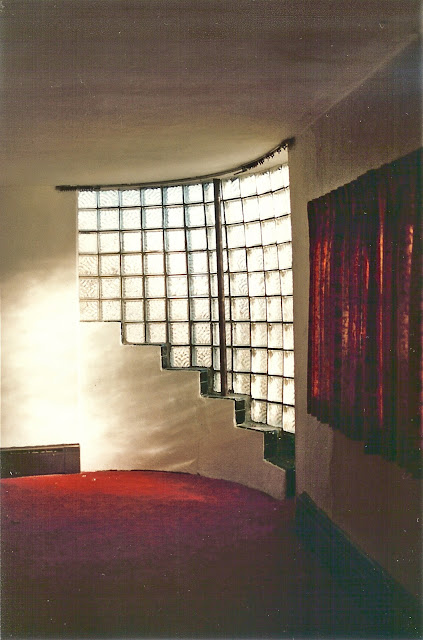 Interior of one of the units shortly before demolition with its signature glass block visibly bowing outward.

The Coral Court Motel was closed in 1993 and razed two years later. The motel was actively on the market for nearly 3 years but no one was able to make the numbers work to preserve the existing buildings with an inflated $1.5 million pricetag plus an estimated $1 million for renovation. Had it remained standing another 3 year, Missouri's Historic Rehabilitation Tax Credit program that came on line in 1998 could have made rehabilitation feasible. 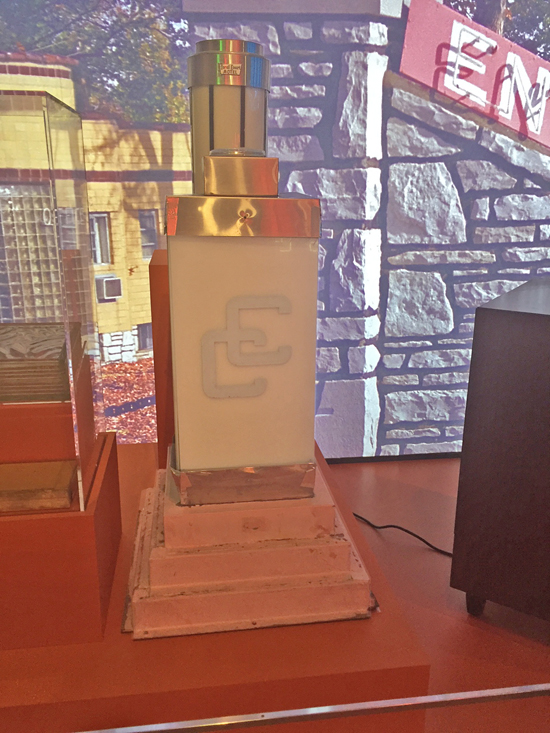 The exhibit features several pieces of memorabilia from the Coral Court including one of the lights that marked the entrance on Watson and some of the glazed blocks from which the buildings were constructed. 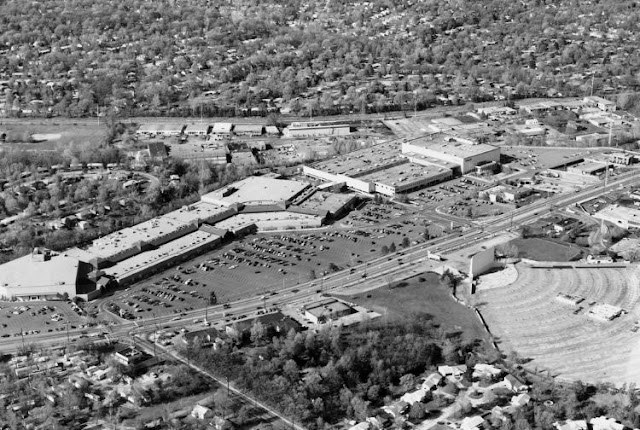 Further west this 1986 aerial view shows a recently expanded Crestwood Plaza across from the 66 Park-In Theater. The drive-in theater had parking for 800 cars. It was closed in 1993 and was demolished in 1994 for another shopping center, much of which now stands empty. As you are probably aware, Crestwood Plaza was finally demolished earlier this year to make way for a not-so-mixed-use redevelopment consisting of free-standing single use buildings in a sea of surface parking. Maybe I should withhold judgement until it is built, but the conceptual plans made public so far make the Streets of St. Charles look like great urban planning in comparison. 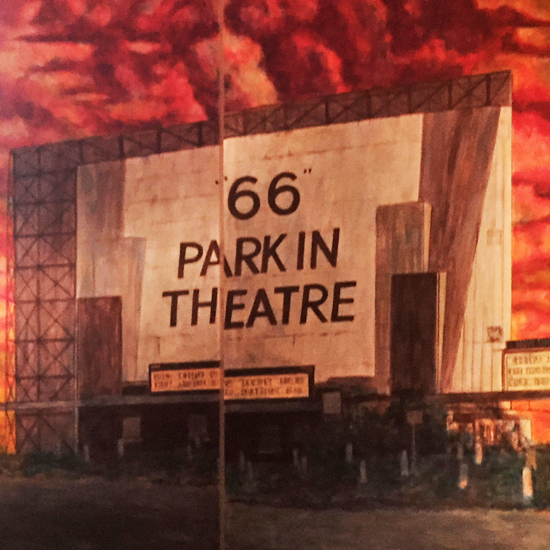 Part of the exhibit features a large mural depicting the 66 Park-In Theater with it's lot full of vintage cars that was painted by a Muny scenic artist. Ironically the mural was painted with a red sky, which was probably meant to be a beautiful sunset, but in my mind it looked like apocalyptic clouds foretelling the coming end for the theater. 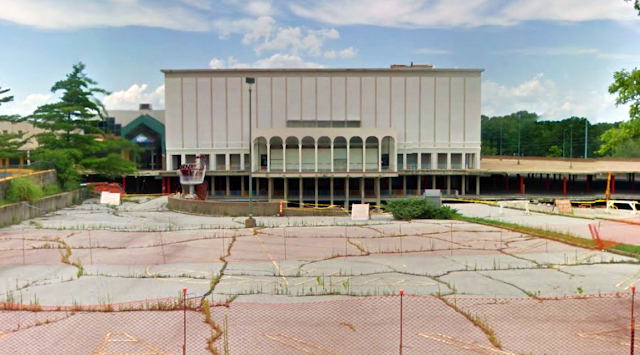 The beginning of the end earlier this year for the former Stix Baer & Fuller/Dillards department store, which anchored the east end of Crestwood Plaza.

A majority of the photos above are from the Missouri History Museum Route 66 exhibit. A few vintage photos and postcards are from Joe Sonderman's Online Route 66 Archive, which is a treasure trove of thousands of photos and postcards of just about everything you ever wanted to see along Route 66 from its start in Chicago to its end in Santa Monica, California. Photos of the Coral Court are some I shot shortly before it was demolished.

If you want to learn more about Route 66 as it traveled through the St. Louis area, go check out the History Museum's awesome exhibit that is currently open and runs through July 16, 2017. Despite some of my commentary above, the show is quite the opposite of depressing and is very informative. The exhibit also features a over a dozen fabulous neon signs that once graced Route 66 through our area, an Airstream trailer with fully vintage interior decor and a beautiful 1963 Corvette Stingray built right here in St. Louis!