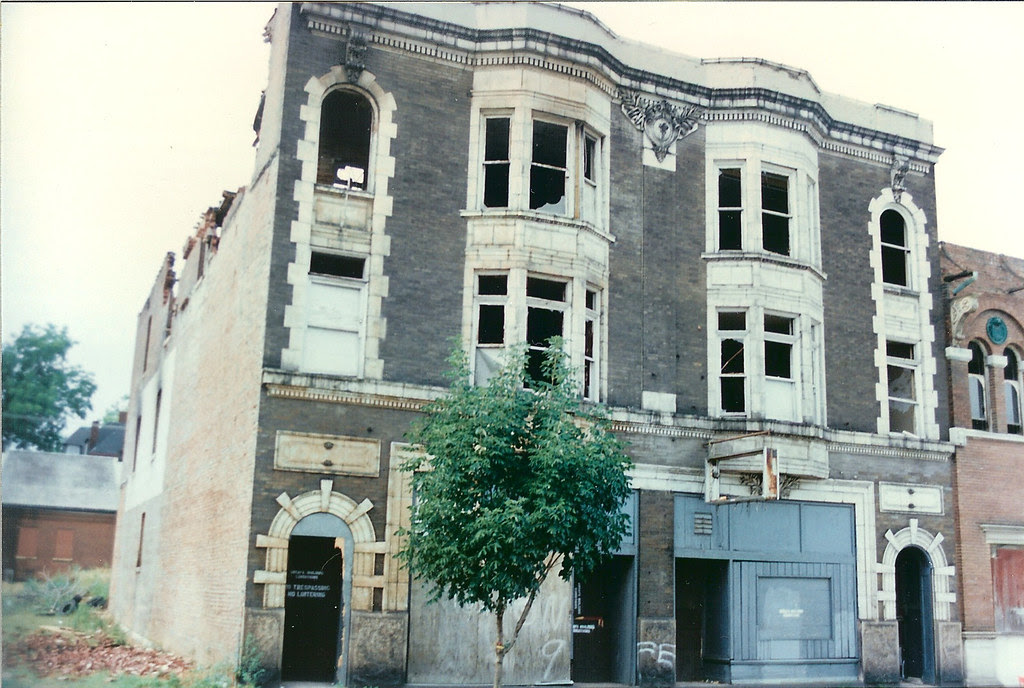 Back on Olive, just down the block from the soon to be gone Central Apartments stood this beautiful building. The building was one of most flamboyant left on the block in the mid 90's, but like most of Olive for several blocks in each direction it stood abandoned and boarded up. In the summer of 1996 the building had a fire that damaged the 2nd and 3rd floors. Despite the fact that the beautiful facade was still fully intact, the building was demolished a few months later.

Next door to the west, (partially visible in the photo above) is the former home of the Wolfner Memorial Library for the Blind, which now stands isolated near the western end of the block. A few years ago, the buildings on the two lots west, from the Wolfner to the corner, were demolished as well (unfortunately I didn't get any photos of these). The former library has also been abandoned for many years, but was listed on the National Register in June 2005. It acquired recently by Grand Center, Inc., and there is now a small sign on the front that reads "Wolfner Lofts", giving hope that it will not meet the same fate as its neighbors on each side. To see more photos of the former Wolfner building , including interior, see the recently revived pages of Sonic Atrophy The actual Wolfner Memorial Library is now located in Jefferson City, MO. 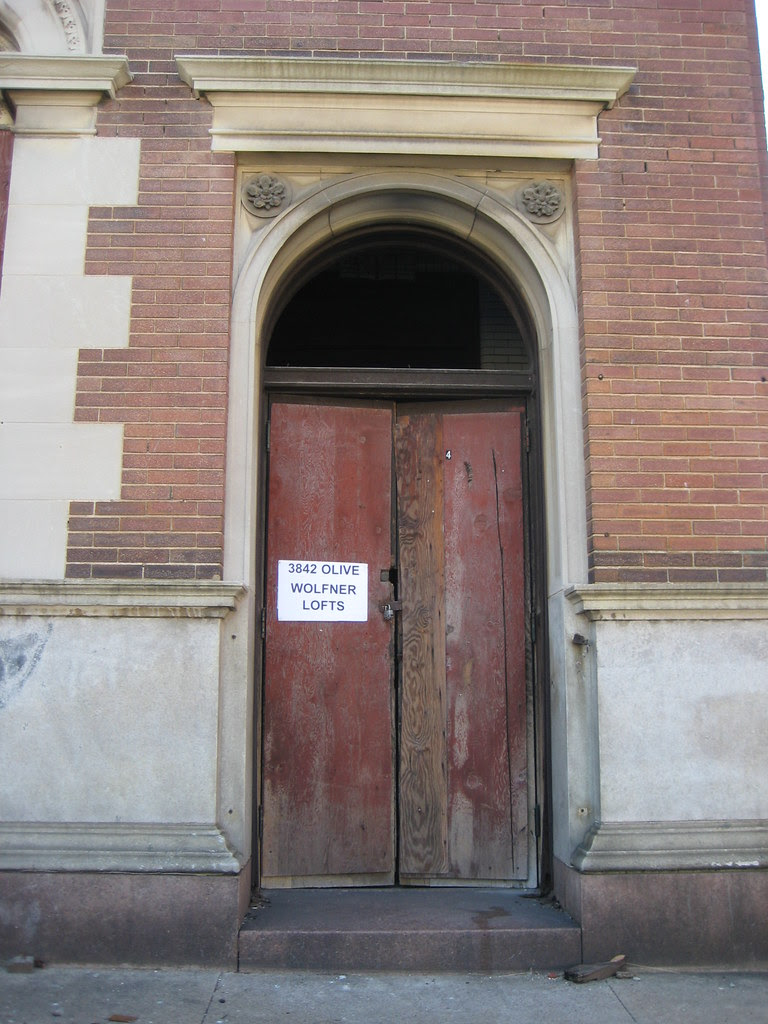 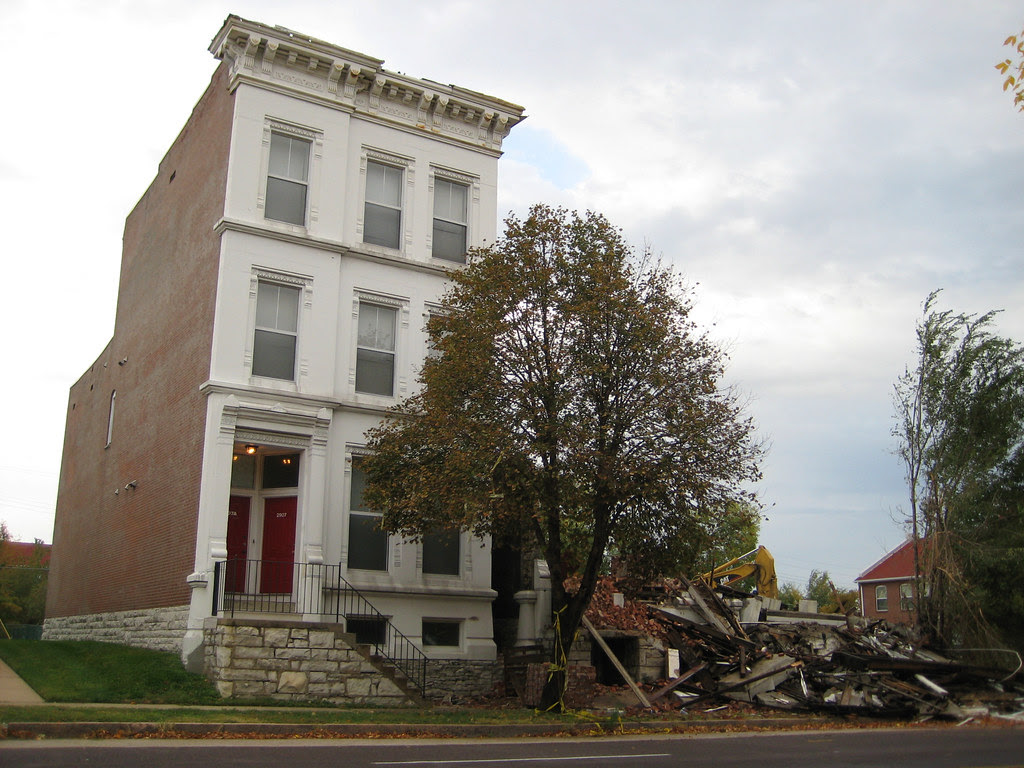 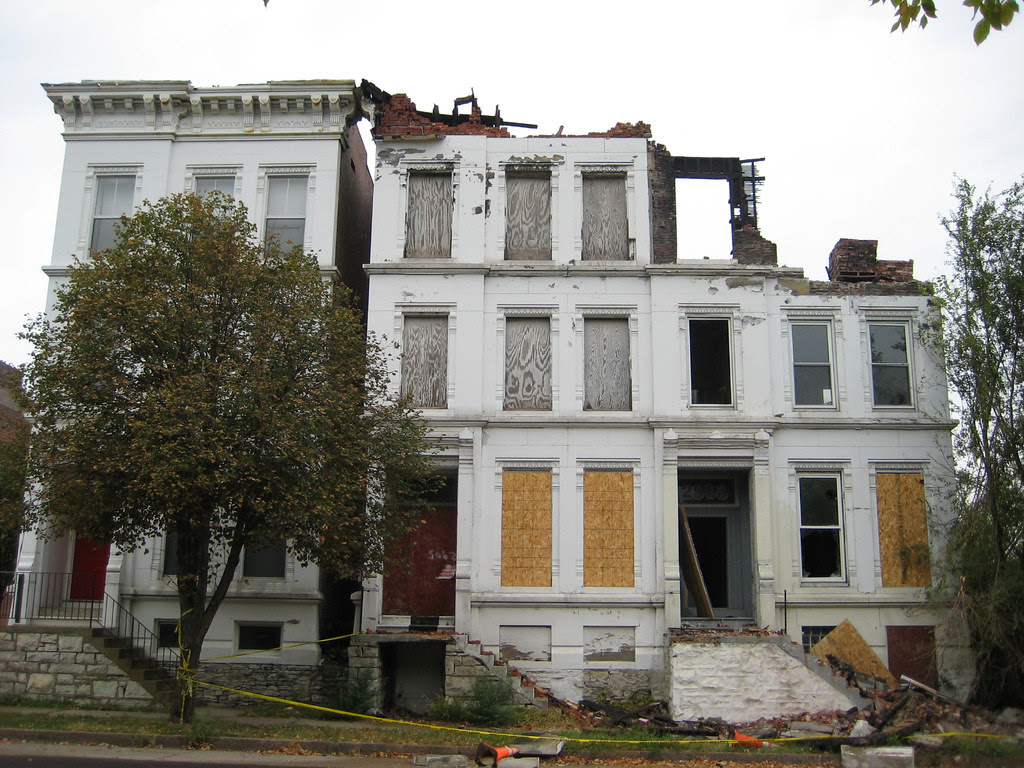 The three limestone faced townhomes are know as Givens Row, which was built in 1884 by Joseph Givens, who would later donate the funds to build Givens Hall at Washington University. 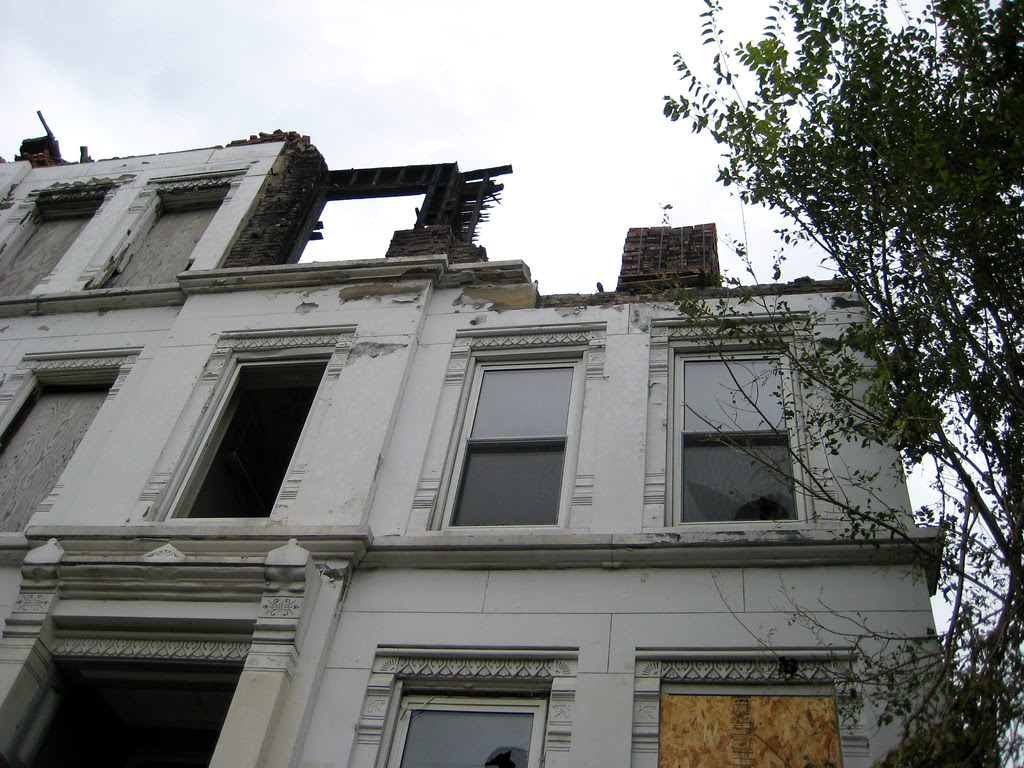 One hundred twenty two years later, in 2006 the townhome closest to the corner, which is owned by Noble Development (one of Paul McKee's slumlord shell companies) a fire occurred on November 30th, less than two months after the property changed hands. The fire was confined to the third floor of the townhouse, but also spread to the roof of the middle unit, which has been owned by LRA since 1996. The fire caused fairly minor damage, which could have easily been repaired/re-built. The two buildings are currently being demolished. Only the third unit at 2907 Delmar will remain. Givens Row was added to Landmarks Association's list of most endangered buildings not long after the fire. The November/December 2006 newsletter gives a more detailed history of the row. 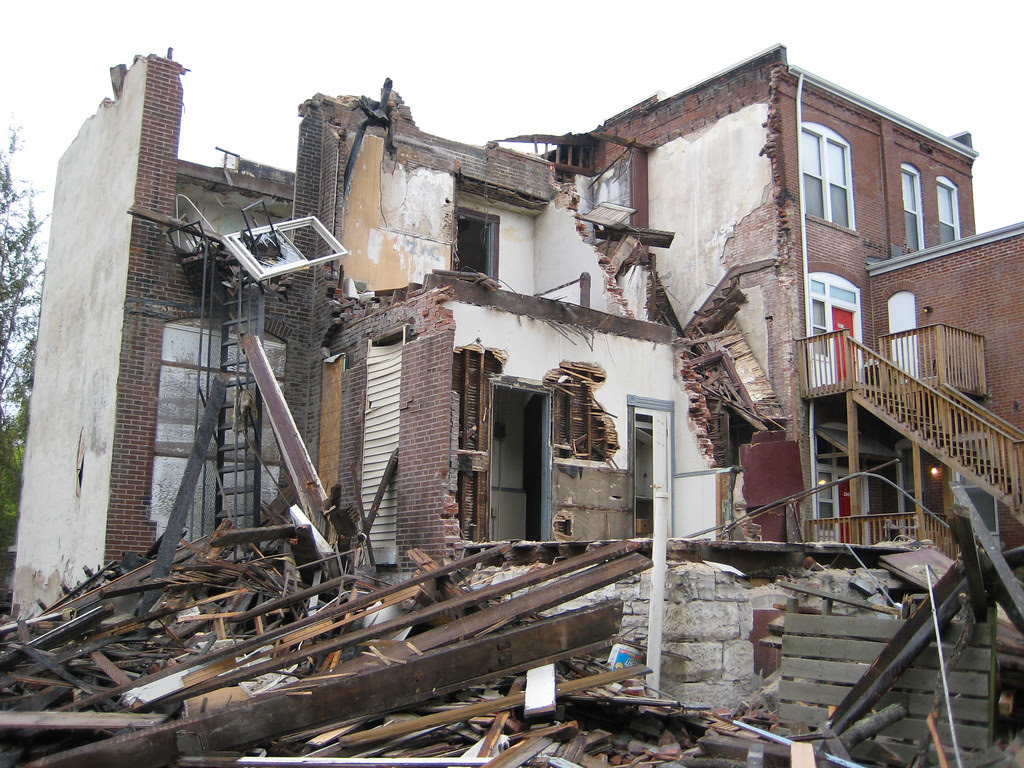 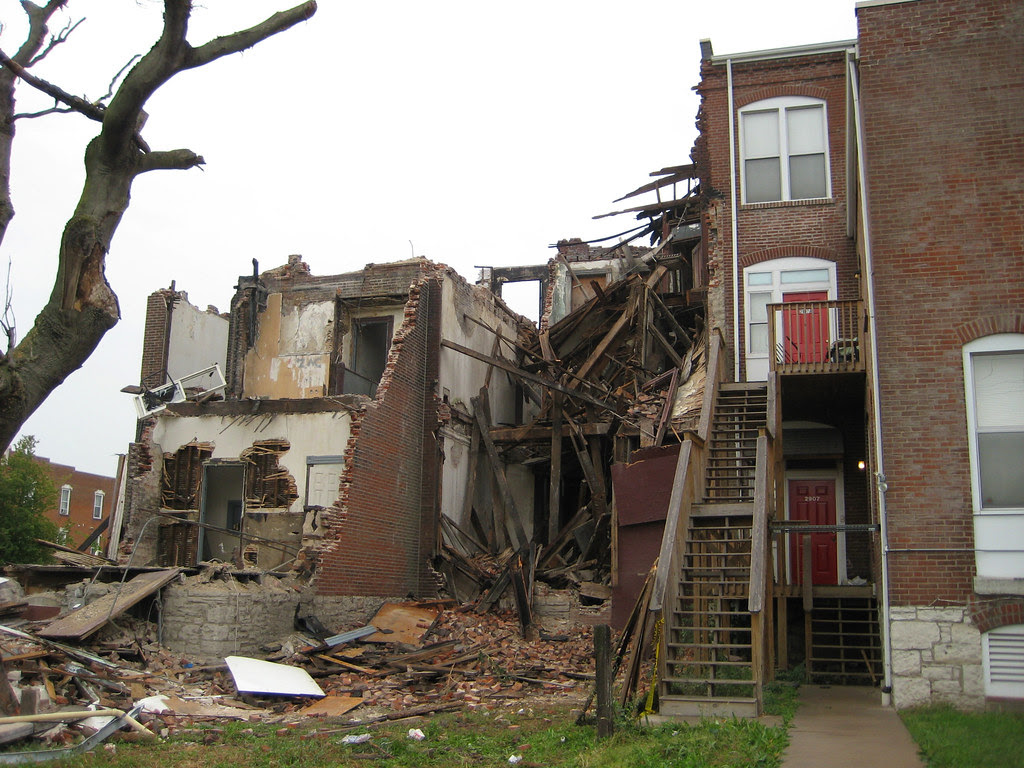 Photos from the rear show little to no fire damage in other portions of the buildings being demolished. 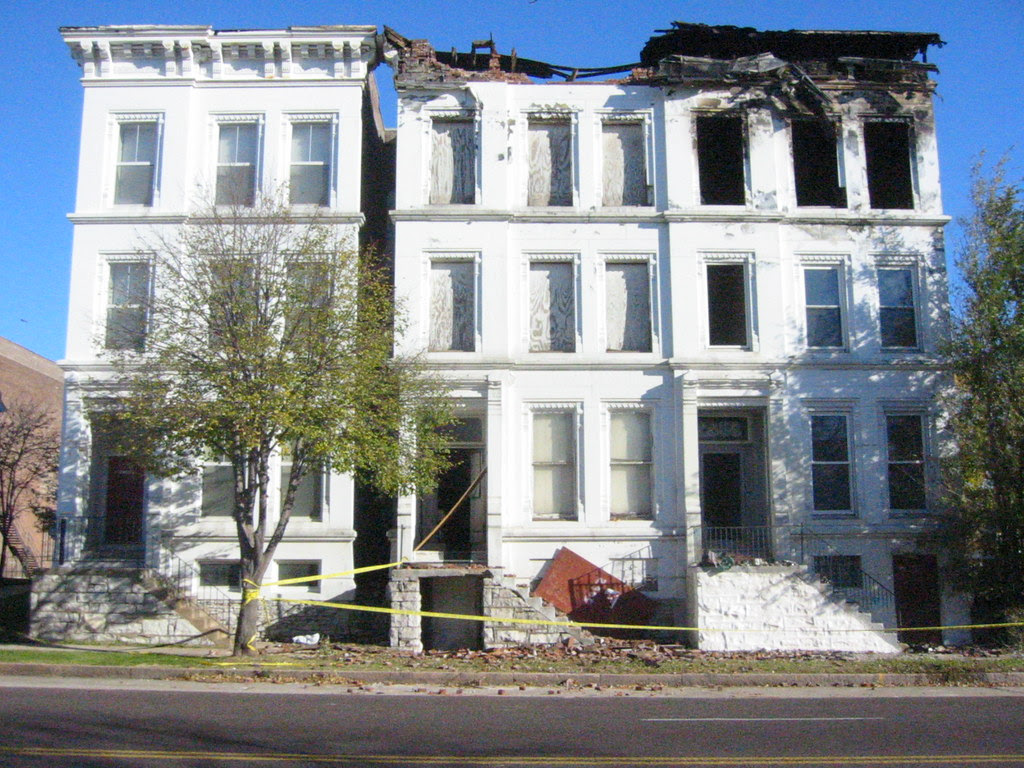 Photo of the row after the fire 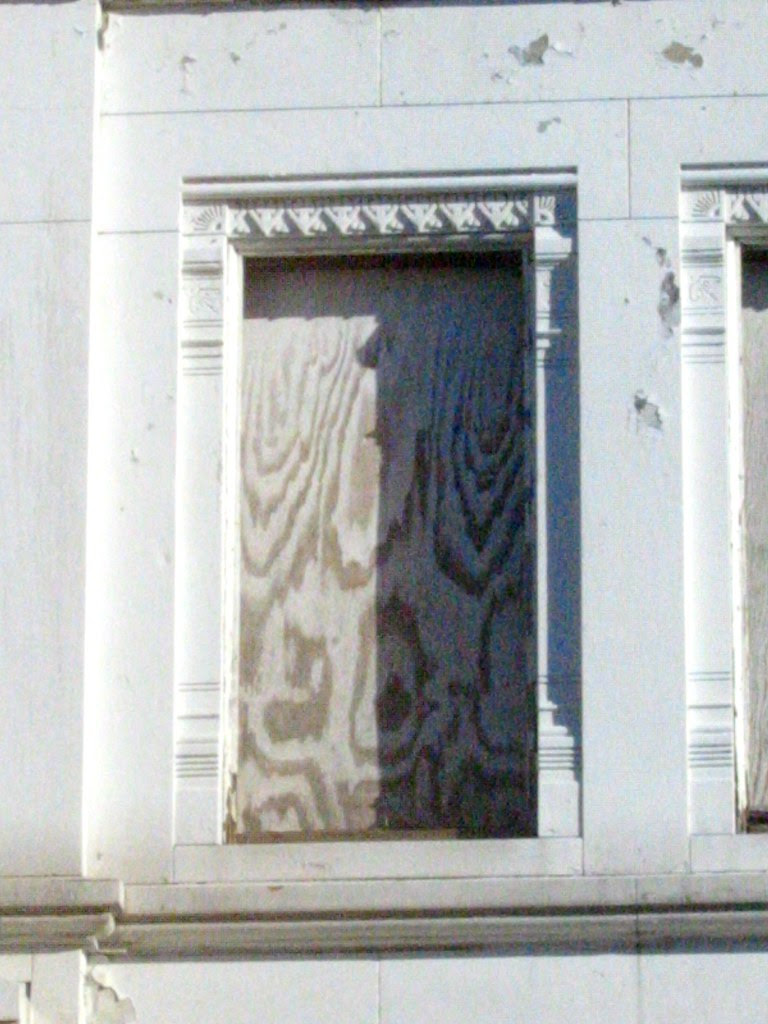 Close-up of the limestone detailing around the windows
Posted by Vanishing STL at 9:51 PM 3 comments: 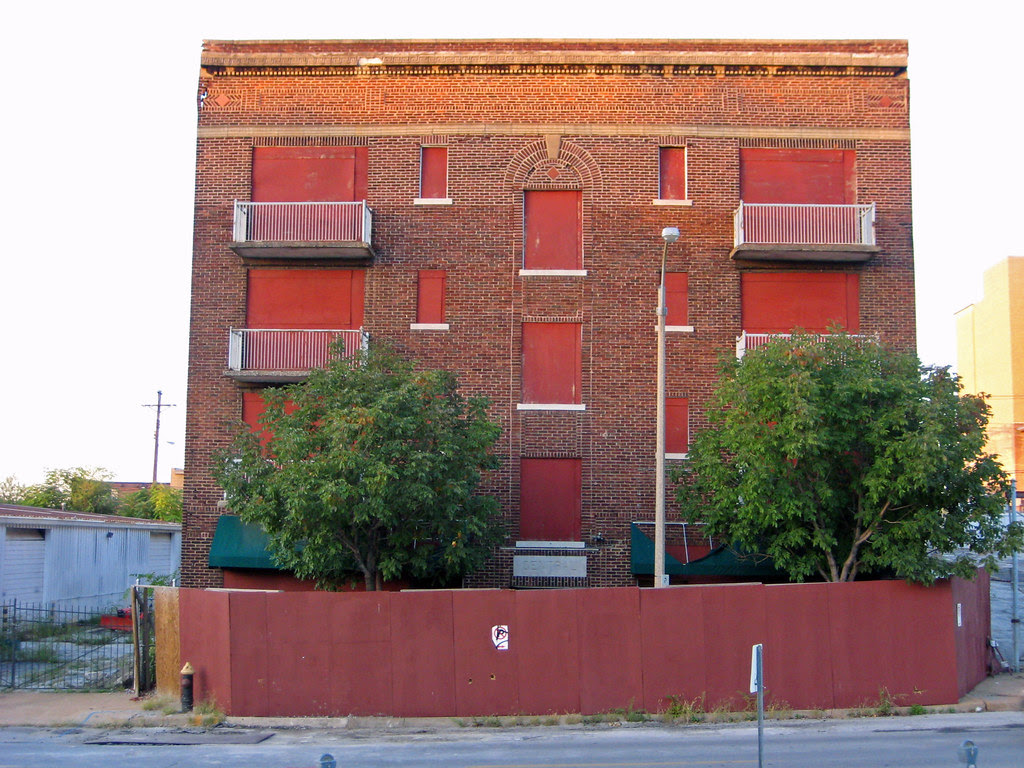 Grand Center, an area that has over the years suffered a large percentage of demolition at the same time it has struggled to regenerate life in the district will soon lose another building. 3727 Olive, which lies outside the Midtown Historic District, is one of a handful of building left on this block of Olive between Spring. The building was built in 1916, and housed 30 small walk-up apartment units on floors 2-4 and 2 small retail storefronts flanking the entrance on the first floor (obscured by the plywood fence). 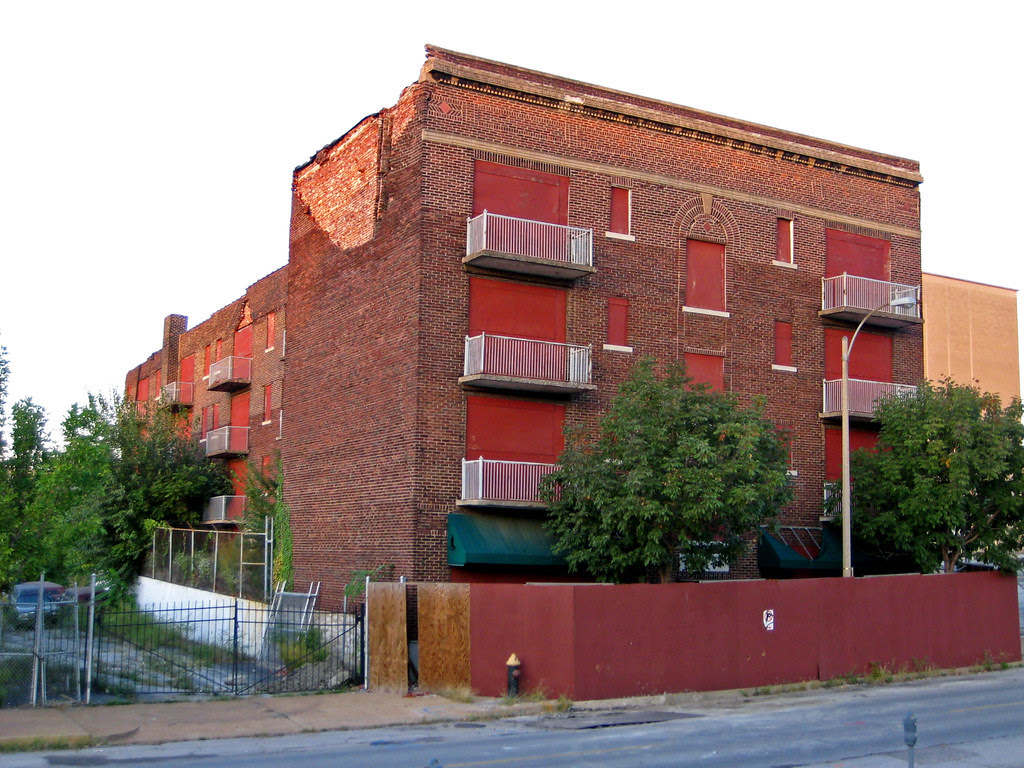 On September 13th, the City issued an emergency demolition order even though the building's condition has not changed much recently. The plywood fence went up a few years ago as the outer withe of masonry began to peel away from the building in a few locations. 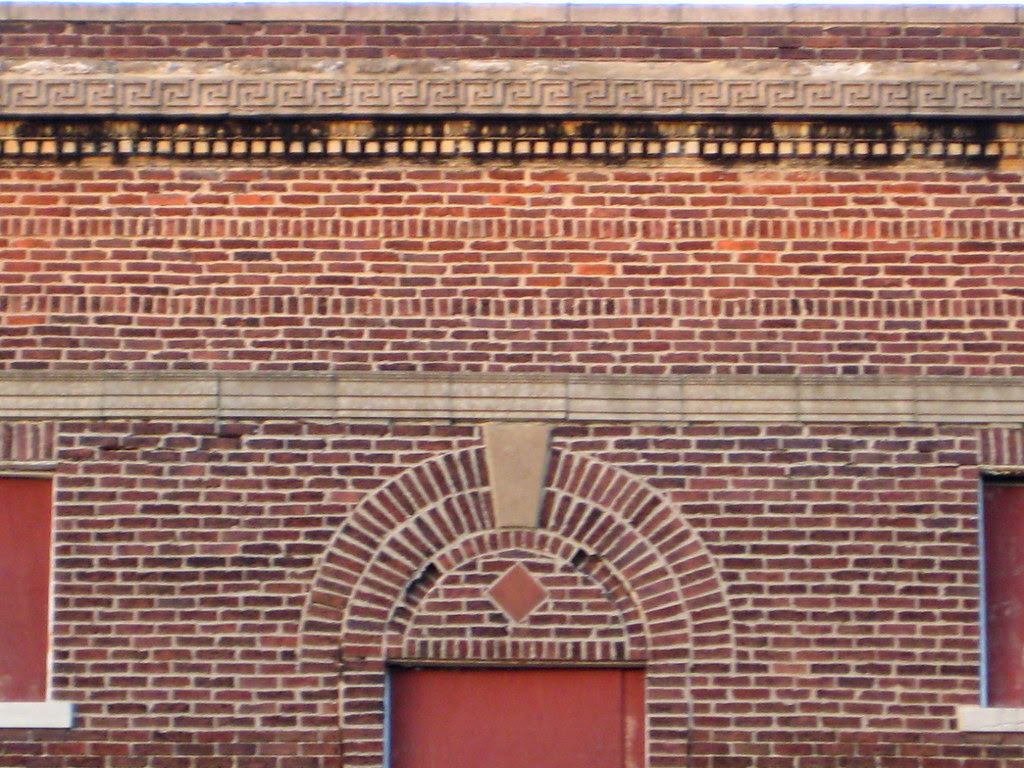 The building is devoid of much of the ornamentation typical of apartment buildings from the time period, with its small cornice being the only exception. Instead, the building's simple but attractive symmetrical elevation achieves interest with brick detailing above the openings and below the cornice, and with the cantilevered balconies at each unit. 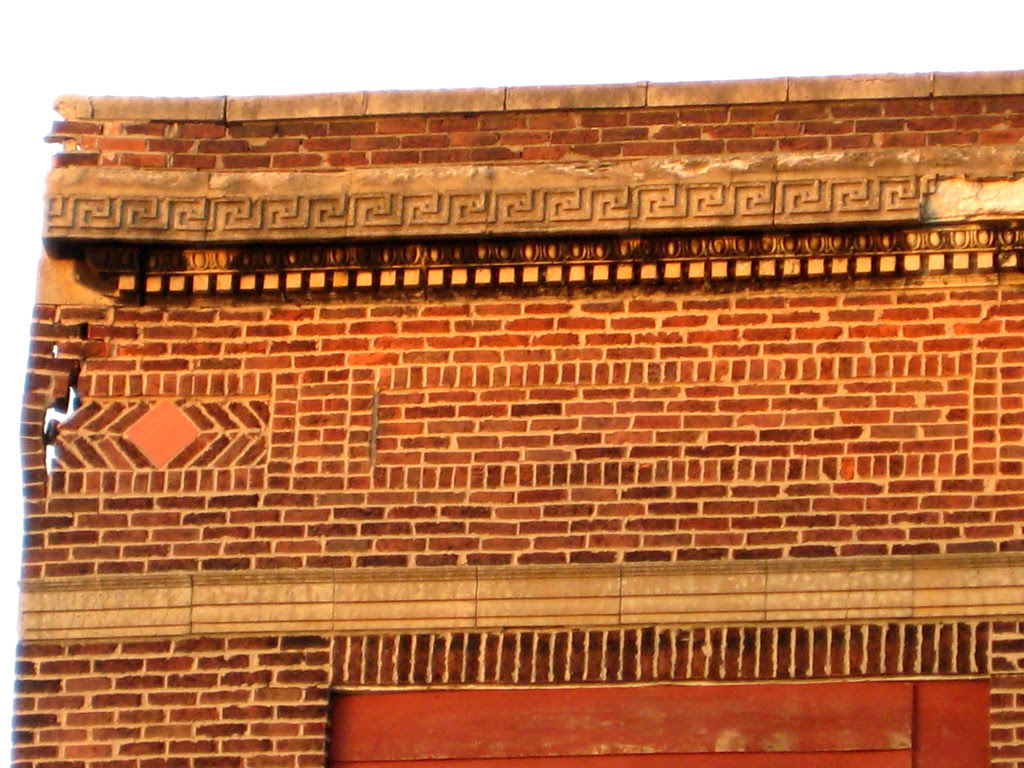 The economics of rehabilitating this building for apartments or condos would likely be difficult given that it is not in the historic district (making it ineligible for historic tax credits), and is likely not distinguished enough to merit an individual National Register nomination. Additionally, adjacent land would be needed for parking since the building occupies the majority of the lot and it's footprint is not conducive to indoor basement parking. This is unfortunate, since rehabilitation of the building could bring much needed additional residents to the area.

Update: After taking a look at ownership along this stretch of Olive, I noticed that Grand Center, Inc. owns properties to the west, but not right next to the building (which they recently acquired as well). If they were to acquire the property just west of the building from the mortgage company that now owns it, a developer could build a new project containing parking for both the new building and the old apartment building (in a garage at the rear of the property of course). Alternately, the rarely used AT&T lot to the east could be acquired and similarly developed. In the mean time, a little masonry work, and possibly a new roof would stabilize the building until the market for the type of development just described emerges.