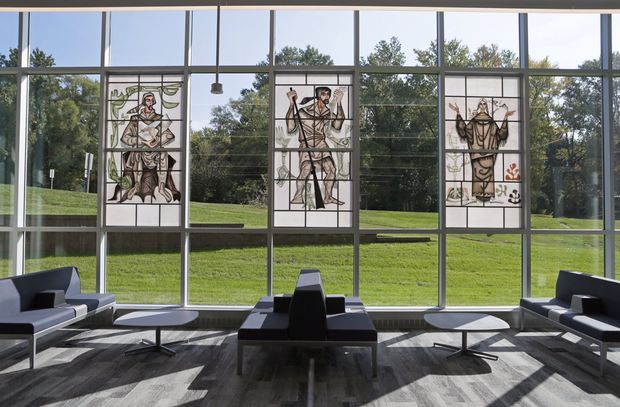 If St. Louis County Library had reinstalled the entire Emil Frei composition, such praise might be deserving, but they didn't. Instead, as you can see above, the chose only the individual figures of Lewis, Clark and Sakajawea and installed them out of context in a plain storefront of clear glass panels. To top off this travesty, the figure panels were installed inside out and extra pieces of plain frosted glass were scabbed in at the top and bottom of each panel. I guess they didn't bother to measure first. 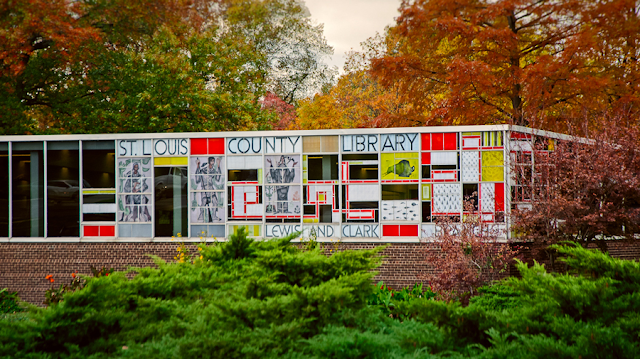 The original stained glass window composition was an integral part of the architecture of the now demolished library by architect Frederick Dunn. The windows gave the otherwise simple shed building its identity and served double duty as its signage.

Esley Hamilton nailed it in his brief letter to Jeannette Cooperman, editor of St. Louis Magazine, which unless I missed it, has not been published:

"If the curators at the St. Louis Art Museum took George Caleb Bingham’s painting “The Jolly Flatboatman,” cut out the central figure of the dancing man, reframed it as a separate painting, and consigned the rest of the picture to who knows where, would you praise the museum for saving the painting? I don’t think so. Yet you praise Kristen Sorth, director of the St. Louis County Library, in your November issue for doing exactly that to the Emil Frei windows at the Lewis and Clark Branch Library.

I’m attaching and pasting in two pictures showing exactly what I’m talking about (2 images above).  The original figures of Lewis, Clark and Sakajawea were parts of a larger composition that included several other smaller images that evoked and symbolized their journey as well as anchoring them in the architectural structure of the building. Now the three images are floating in clear glass. Public libraries are supposed to be citadels of civilization, but our County Library not only destroyed the most significant work of architecture in their system but in the process trashed an irreplaceable work of art that they held in trust for the public. Whatever Ms. Sorth may achieve in the future, these acts will remain indelible blots on her record." 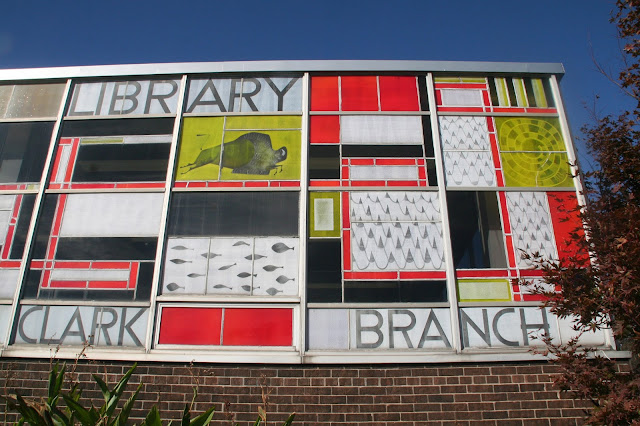 The window composition depicted some of the many sights seen by Lewis, Clark and Sakajawea including buffalo, fish, snakes and forests. The meandering red line likely symbolized their journey across the then uncharted Louisiana Purchase Territory. 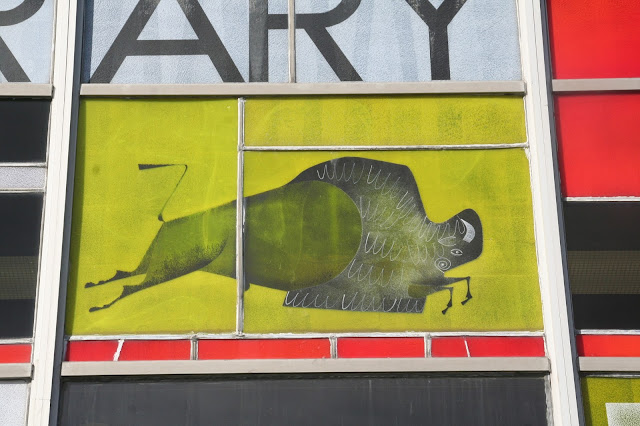 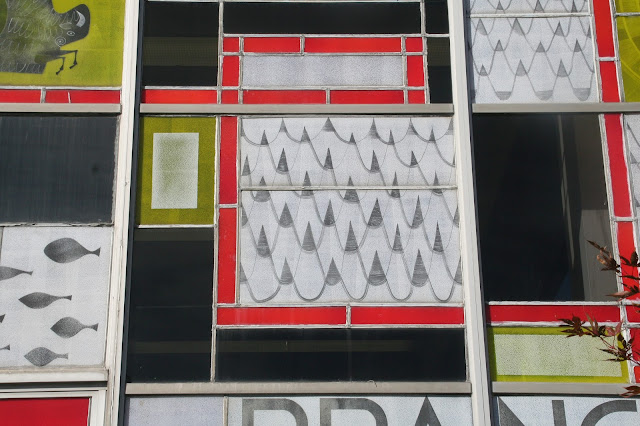 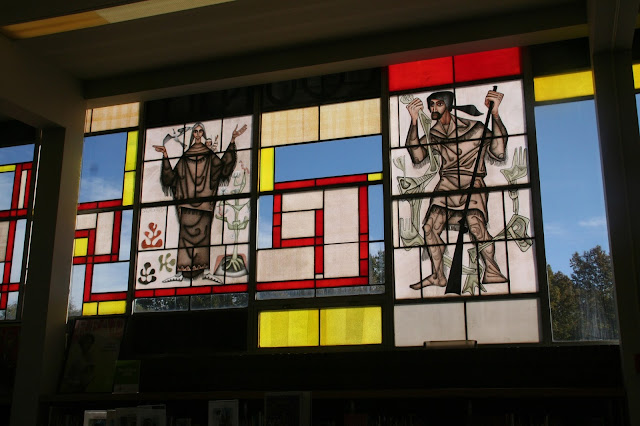 Inside the now demolished building, the windows composition filled the space with a warm colorful glow, the effect of which is completely gone in the reinstallation of the singular figure panels. 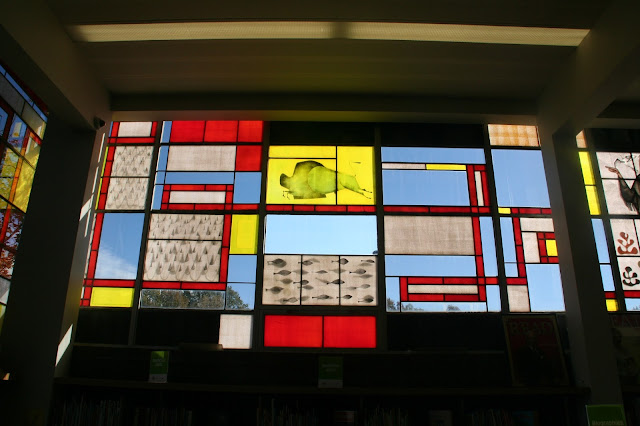 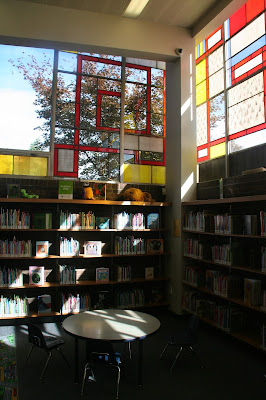 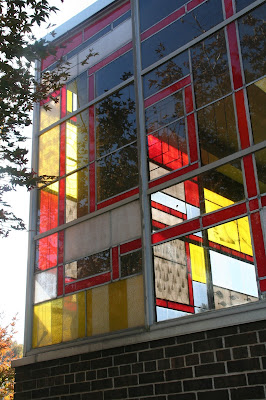 Interior and exterior photos illustrating how the original composition wrapped the corner of the original building. 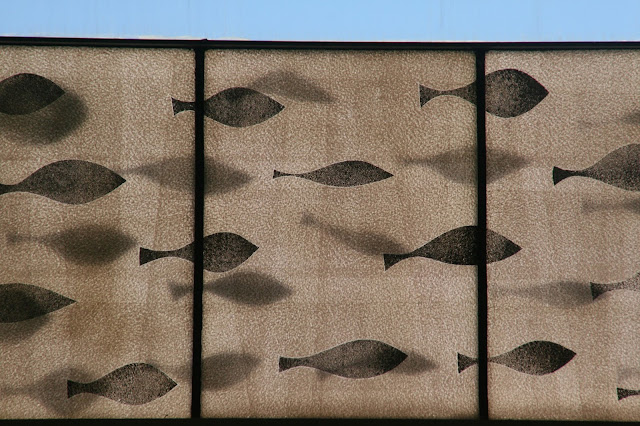 For the panels depicting fish and trees, Emil Frei emplyed a technique known as plating where different images were painted onto the interior and exterior faces of the glass. When the sun passes through the translucent panels the effect creates additional depth in the composition. This technique was widely used by Tiffany. 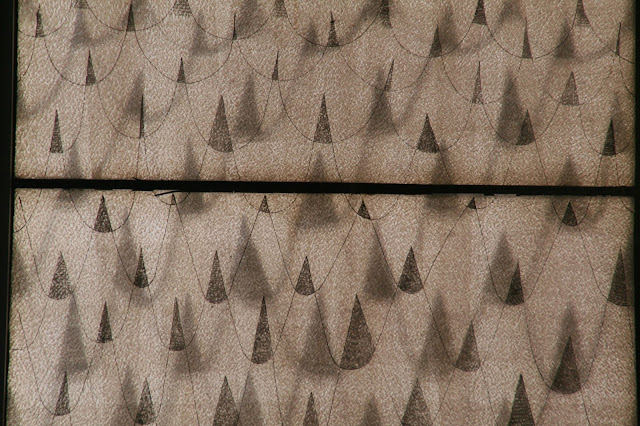 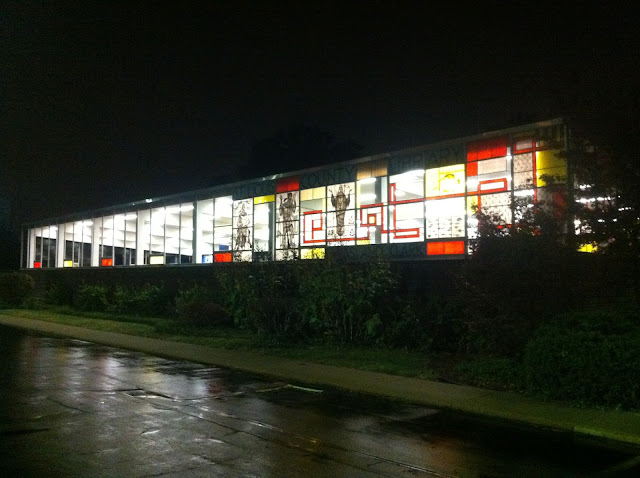 A night view shows the inverse of the interior daytime view. The glowing composition became a colorful beacon to all who passed by. A reporter covering the opening of the replacement building was apparently told that the remaining pieces of the original window composition are "in storage".

"Saving" is NOT the right term for what happened at the Lewis & Clark Branch Library. I would say local architect, MCM expert and blogger Andrew Raimist's description: "Cultural Vandalism" best sums it up.

Photos in this post are by John Guenther, Esley Hamilton & Andrew Raimist.