All Sales Are Final 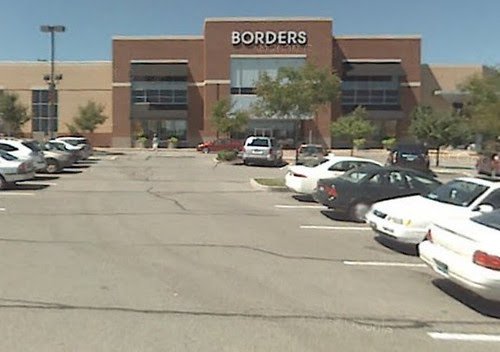 Recently the Borders Bookstore in Brentwood closed its doors for good along with the rest of the St. Louis locations and stores nation wide. Normally I would not be glad to see a retail establishment go out of business. It sucks for all who are losing their jobs and yet another retail space will sit empty in a not so great market for filling vacant sales space. In the case of Borders however, I can only say good riddance. 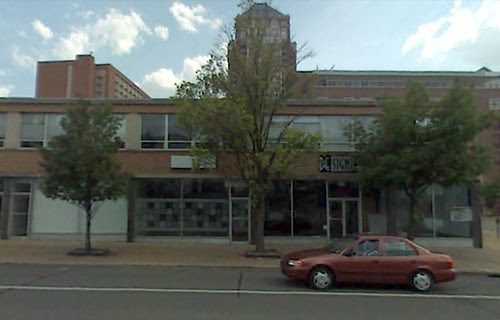 Library Ltd.'s first location in an unassuming storefront on Forsyth Blvd.
Why the animosity? This story begins in 1970 when Allen and Terry Mittelman moved here from New York City to invest their savings and open a small bookstore in a 1,700 square foot space at 7538 Forsyth Blvd. across from Famous Barr in Clayton. The bookstore was The Library Ltd. The Mittelman's then grew the store on Brentwood Blvd just south of Maryland Avenue to about 7,000 square expanding into adjacent storefronts. By the early 90's, the Mittelman's could see that the future of bookselling was going big, and in July 1992 jumped at the opportunity to become the anchor tenant in the former Srugg's Vandervoort Barney Department Store building at Hanley and Forsyth. 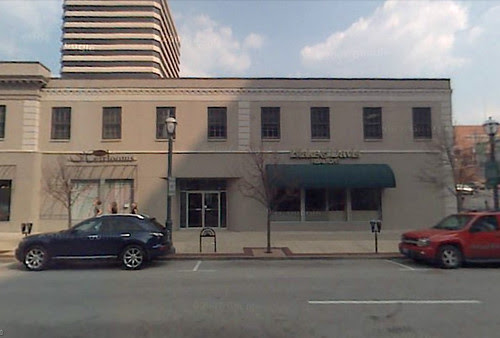 The location on Brentwood where I shopped for comics as a kid.
The Mittelman's transformed Harris Armstrong's modern 53,000 square foot department store into a veritable palace of books and more, complete with a 14 foot tall turreted castle for the children's book section. Other areas of the store were imaginatively themed fitting the books for each department. They branched out to carry music, cards, stationary and other associated ephemera. A cafe/coffee shop as located on the large mezzanine level with its floor to ceiling windows at the south end of the building. The Mittelman's arranged book signings each week, attracted celebrity authors on a regular basis, hosted wine and beer tastings, fundraising events, meetings for professional organizations and other groups, etc. In it's heyday, The Library Ltd., which had become one of the largest independent bookstores in the U.S., felt like part retail store, part social gathering place, part community center. 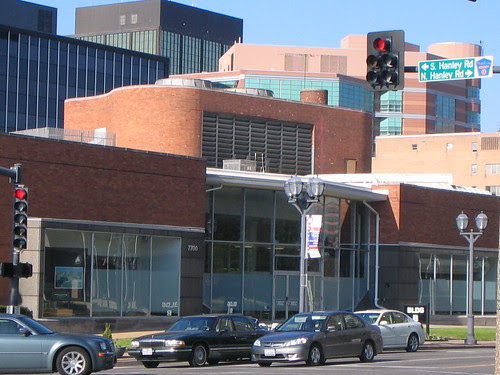 Library Ltd.'s final location in the former Vandervoort's at Forsyth & Hanley
In 1997, the Mittelman's were approached with a buy out offer by growing giant Borders who was looking to expand its market in the St. Louis area. After 27 years in the business, the Mittelman's had grown tired of the grind of long days and the excitement brought by constantly expanding and bettering the store had waned. They agreed to sell on the promise from Borders that The Library Ltd. would keep its identity, unique flavor and not just be absorbed into the chain. 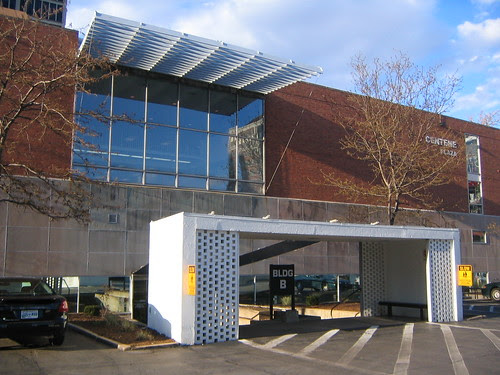 As would be expected with the take over by the corporate machine, these promises quickly evaporated. First bordered re-organized the store, crudely re-naming various sections with photo copied pieces of paper scotch taped to the shelves. By 2000, Borders had renamed the store and in September 2001 closed and vacated the Clayton store for good so they could move to the re-vamped Brentwood Square next to Highway 40. I vowed never to step foot in the Brentwood location, and never did. Ten years later the over bloated giant that didn't adapt to the ever changing market would meet its end.
In October 2008 the former Library Ltd. building was demolished to make way for Centene's new headquarters building. You can read a detailed two part article about Allen and Terry Mittelman from the Post-Dispatch here and here.
Posted by Vanishing STL at 6:00 AM 2 comments:

The Saucer Will Fly Again! 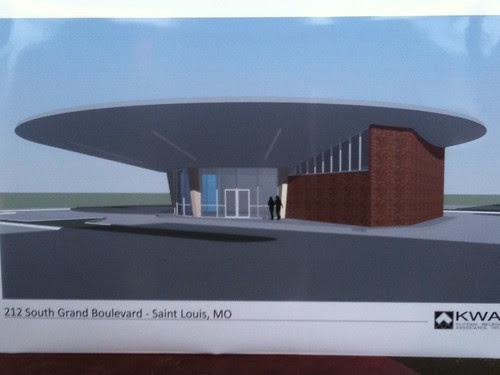 This evening developer Rick Yackey unveiled two renderings of the Saucer building as it is planned for renovation. The renovation would restore the original storefront glass at the center of the structure and would add some additional space under the existing saucer roof, which would bring the enclosed area to about 4,000 square feet. Yackey indicated that Historic Rehabilitation Tax Credits will be used for the renovation. 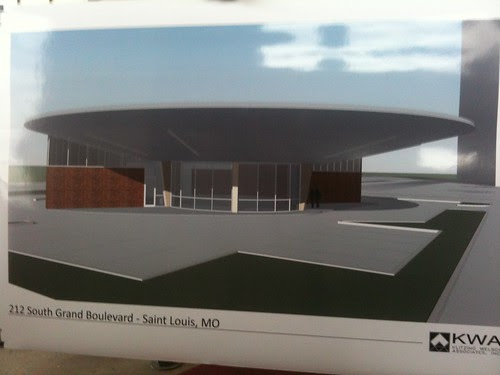 There would be two tenants, and Yackey said he has had increased interest in the building since the national publicity about its previously planned demise. While not revealing the planned tenants, Yackey said they would likely be restaurant and a coffee shop. 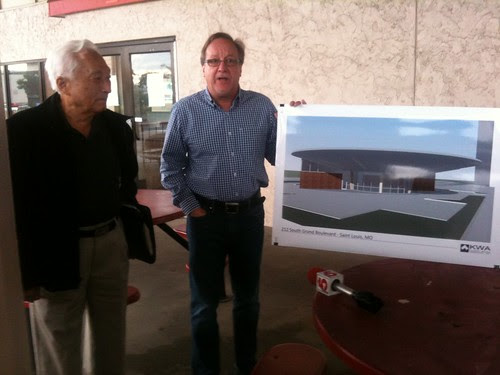 Richard Henmi, the saucer's original architect happened to show up for the unveiling, and was very pleased with what he saw in the renderings.
Posted by Vanishing STL at 10:30 PM 7 comments: 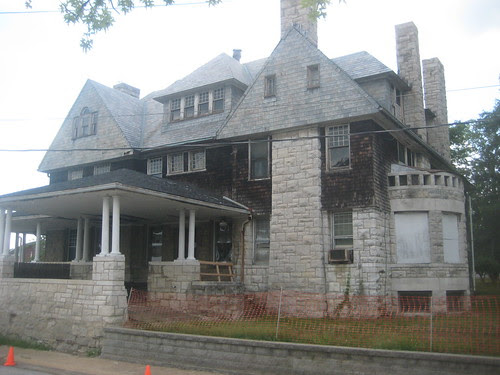 Friday was the deadline proposals to move the Shingle Style mansion known as Brownhurst from the edge of the campus of Vianney High School in Kirkwood. The Post Dispatch reported Saturday morning that the Society of Mary intends to move forward with demolition of the mansion pending final approval from the City of Kirkwood. 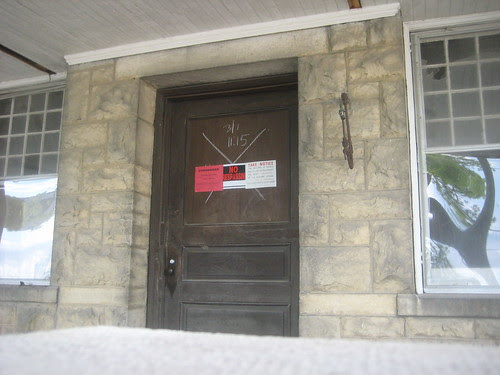 Demolition had been delayed twice by the Kirkwood Landmarks Commission, and most recently the Marianists had offered $30,000 toward moving the mansion. Moving the mansion however has been estimated to cost over $400,000, including the cost of a new foundation on which to place the structure. Purchasing a sufficient site in the area would be an additional expense that could have cost upwards of a few hundred thousand dollars depending on the location. 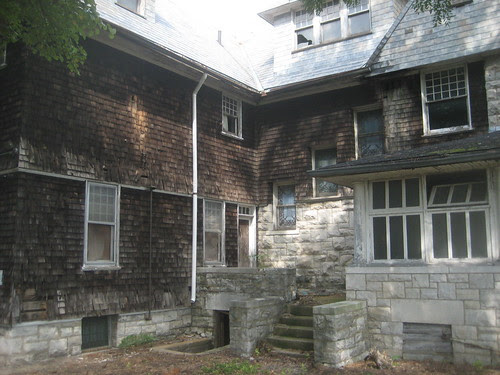 The Marianists refused an offer from an unidentified Kirkwood philanthropist who wanted to buy the mansion, invest between $500,000 to $2,000,000 to rehabilitate the building at its existing location, and use it as an incubator for non-profit organizations. 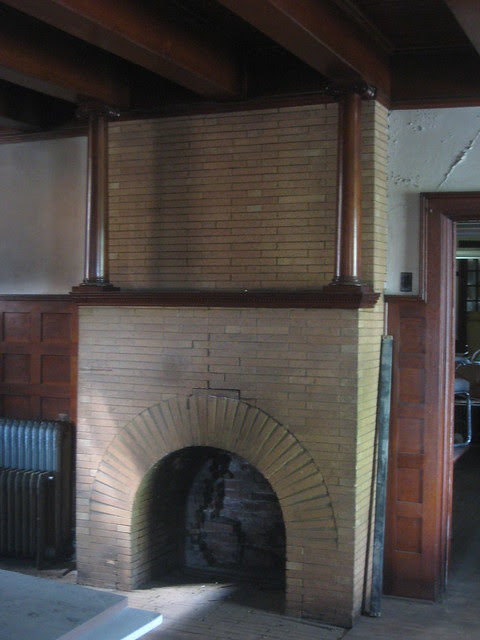 For over 20 years, the Society of Mary has treated the mansion like a slumlord property, leaving it in an abandoned state with little to no maintenance, and then claiming it is a "danger" to students of nearby Vianney. Although abandoned for so long, the mansion is still in amazingly good condition with the only exception being the roof of the wrap-around porch. It's hard to see how a renovated non-profit incubator would be incompatible or a "danger" to Vianney's students. 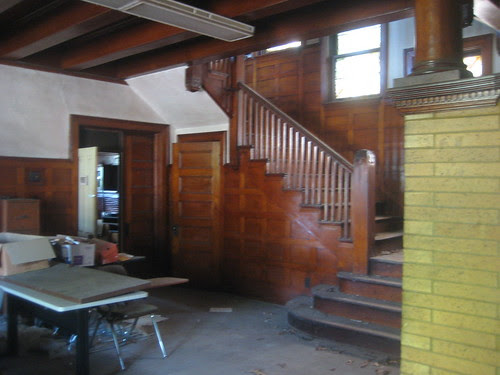 Just a few hundred feet southwest of Brownhurst and also adjacent to Vianney is the Marianist Galleries, which the home, studio and gallery of resident artist Brother Mel Meyer. The studio/gallery building is surrounded by large metal sculptures by the artist. The studio/gallery has been on the campus since the early 1970's and has never been deemed a "danger" to the nearby students. 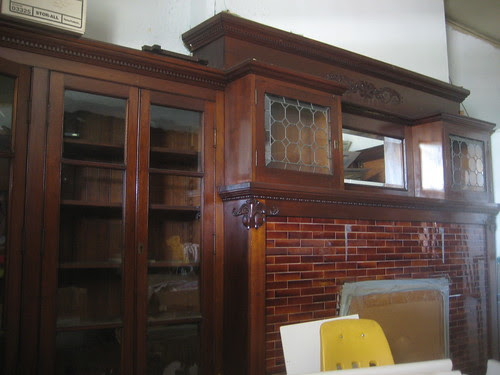 The fact that Brownhurst will likely be allowed to be demolished is a disgrace to Kirkwood, a city that for the most part does value its history. Unlike Clayton, Ladue and many other St. Louis suburbs that have no ordinances to protect historic properties whatsoever, Kirkwood does have a Landmarks Commission. Unlike St. Louis' Preservation Board, the Kirkwood Landmarks Commission apparently does not have the power to say NO to demolition, or at least in this case was not willing to do so. If someone has more information about the Commission's authority, please comment. 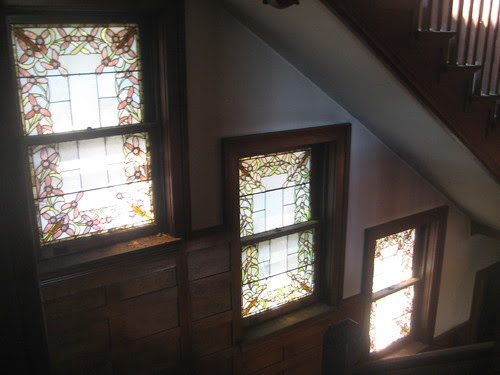 As you can see from the interior photos that I took several weeks ago, Brownhurst is in no danger of collapse, nor does it really have any serious damage. There is some water damage mostly from the windows that the Marianists have left open for years, but no structural issues. 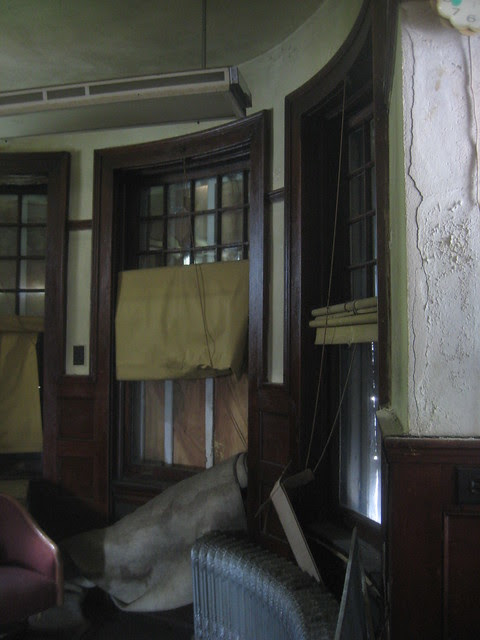 After I did a previous post on Brownhurst, at the request of a member of the Kirkwood Landmarks Commission I set all of the interior photos so that they could not be seen by the public. This was done in an effort to protect the interior elements, but now that the mansion appears headed for demolition, I have re-set all photos to public viewing. According to the member of the Commission, over the last several weeks, an authorized team has salvaged important interior architectural elements, including hopefully most of the items in these photos. It was hoped that these could be re-installed in the mansion one it was moved, but now it appears that they will be orphans as the structure seems doomed for senseless destruction. 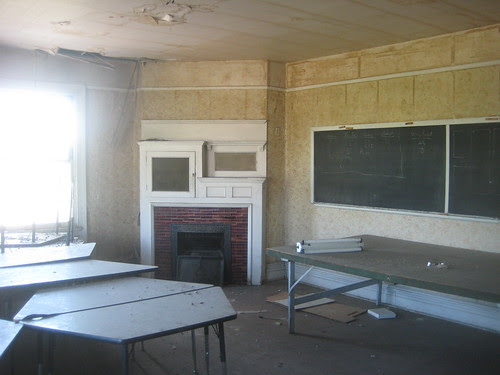 All of my photographs of Brownhurst may be seen here on Flickr. 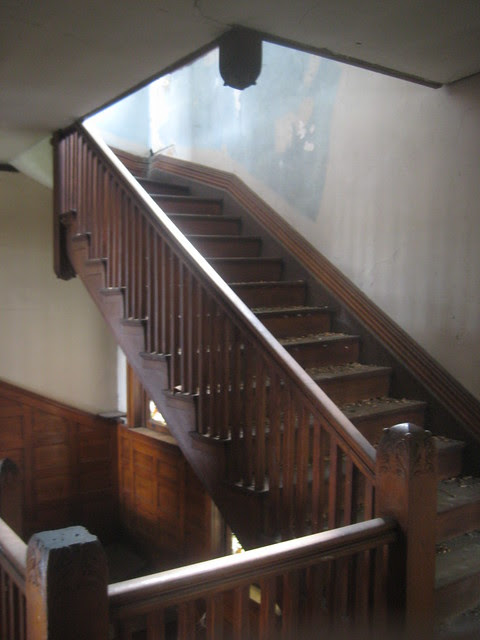 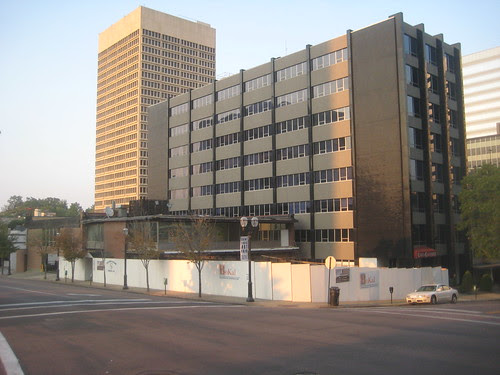 Last night we went into Clayton to satisfy our cravings for Fatted Calf burgers. As we walked down Bemiston toward the restaurant, I noticed the plywood wall built out into the sidewalk near the corner of Bemiston & Carondelet. I realized that it was Natalie Gayle Plaza, the small modern two story building with the sunken plaza at the corner, that was surrounded. 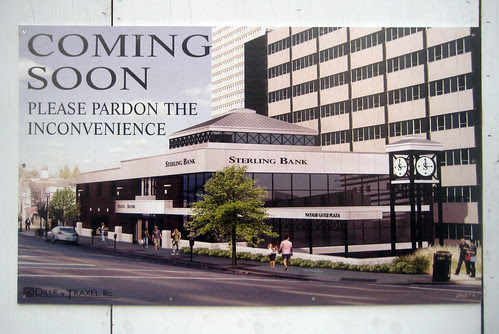 It turns out that the building is not being demolished, but it is being completely re-skined for a new bank. The worst part of the "updating" is that in the sunken plaza the beautiful cascading multi-level fountain will be replaced with "ye olde clock tower"!

A Streetview of the building before the construction. I've never thought the building itself was that great, but always liked the element that extends out and frames the edge of the plaza. This apparently will be retained, but its elegant angles will be replaced with a boxy look. St. Louis County property records indicate that the building and plaza were built in 1950. If anyone has information about the original architect, please share. 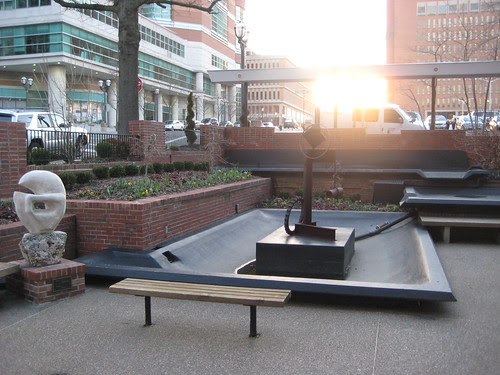 Fortunately I snapped a few shots of the plaza a few years ago. Besides the fountain there were a several pieces of modern sculpture scattered around the plaza. 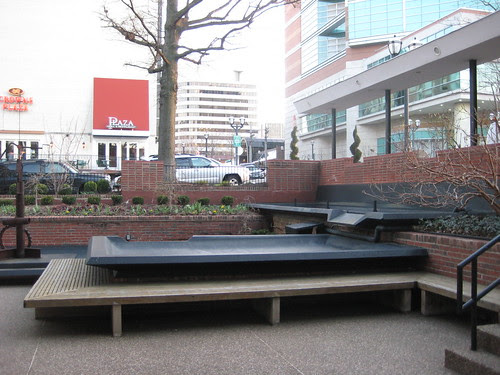 While sunken plazas from the modern era can sometimes be inhospitable places, I always found the multi level fountain and arrangement of seating here to be one of the more attractive places in downtown Clayton (and those are few and far between). 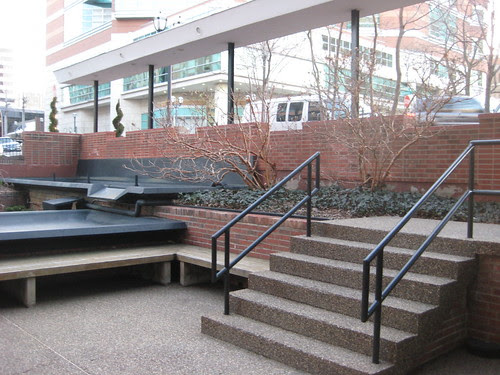 The landscaping and floating element extending from the building gave a sense of enclosure without feeling cut-off from the surrounding area. Standing on a trash can in front of the modern hi-rise next door, I was able to get a few shots over the 8 foot plywood wall. As I suspected, all traces of the elegant plaza have been wiped clean and will undoubtably be replaced with something much less interesting. 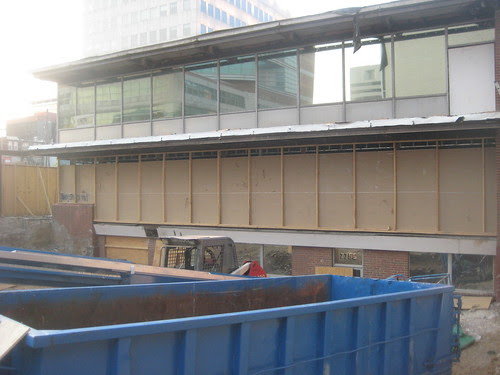 From the rendering above, it appears that the shading overhangs that extended from the south elevation of the building will be chopped off (or infilled) so that the new facade is perfectly flat.
Posted by Vanishing STL at 8:15 PM No comments: