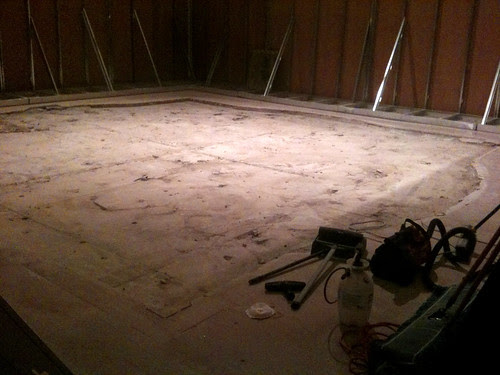 Friday evening I finally went to the St. Louis Art Museum to check out the Joe Jones exhibit, which is excellent and I highly recommend everyone see it. As I walked through the glass front doors facing Art Hill into Sculpture Hall though I was somewhat unprepared for what I would encounter. Immediately I saw the plywood wall in front of me and at the same instant sensed the absence of the sound which I have enjoyed in that space all my life. The fountain was gone! I was aware of the plan to remove the fountain, but was still somewhat caught off guard as I had not been inside the museum for several months. I had gone to a few of the public presentations about the museum expansion and knew that others shared my displeasure with the idea of moving the Neptune fountain out of Sculpture Hall. I had hoped that maybe there would be enough public outcry that the museum might change their plans, however that obviously didn't happen. 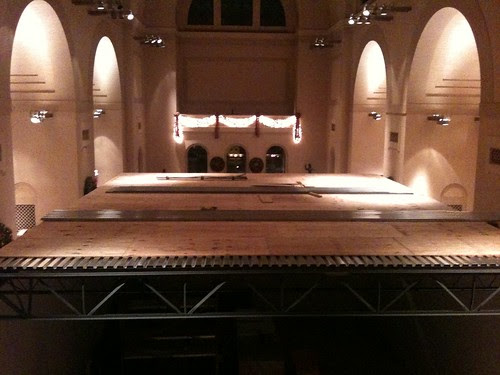 Beyond the plywood wall around the scar in the marble floor where the fountain was located the entire south end of the hall has been walled off and a temporary ceiling is being constructed above. This is presumably so that construction can occur on the new grand staircase to a new lower level hallway leading to galleries and the south building where the restaurant gift shop and auditorium are located. 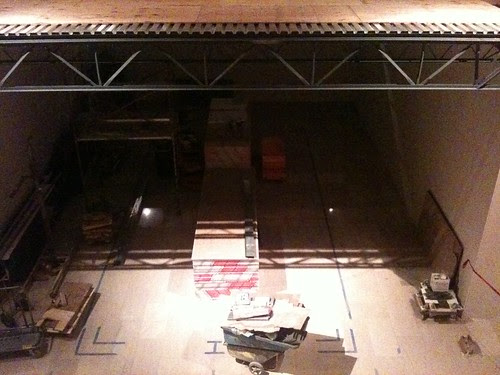 The location of the grand staircase centered in Sculpture Hall (outlined by the tape lines) was likely the reasoning for removing the fountain, because of course you couldn't have a fountain as the focal point at the top of the new grand stair, right? 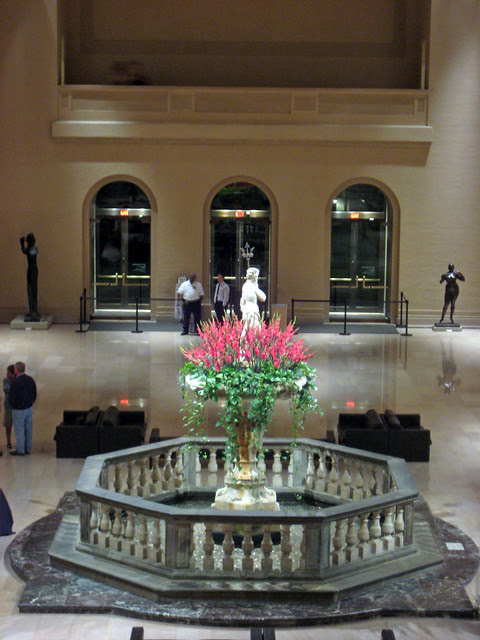 The Neptune fountain as it stood welcoming generations of St. Louisans until recently at the center of the hall. According to a fact sheet about expansion on the museum's website, the fountain will be relocated to a new group entrance at the South Building. Since public parking will be concentrated in the new garage under the addition and on the existing surface parking areas flanking Art Hill, most visitors with the exception of school children and bus tours may never enjoy the fountain. 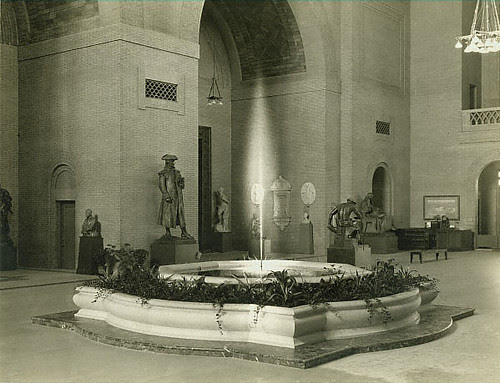 The Neptune fountain was not the first in this location. This fountain designed by architect Louis LeBeaume, who with Eugene Klein designed the Kiel Auditorium & Opera House, was installed at the center of Sculpture Hall in 1928. The halls marble floor, also designed by LeBeaume, was installed in the same year. Prior to that time the floor had been bare concrete.
In the photo above, you can see the finish of the walls and ceiling of the hall as they were when the museum was constructed prior to the 1904 Worlds Fair. The walls were buff brick and the panels of the barrel vaulted ceilings were a herringbone patterned brick or tile that resembles a Gaustavino ceiling. 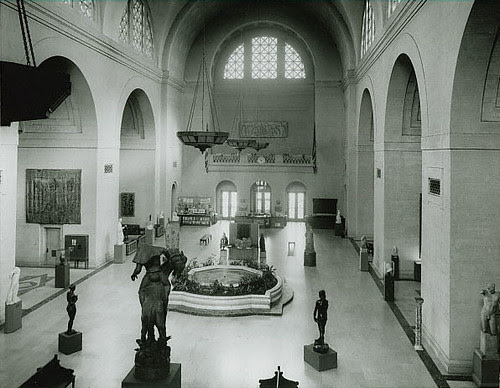 By 1950 the original walls and ceilings had been covered over with a cement or plaster parging, still present today. 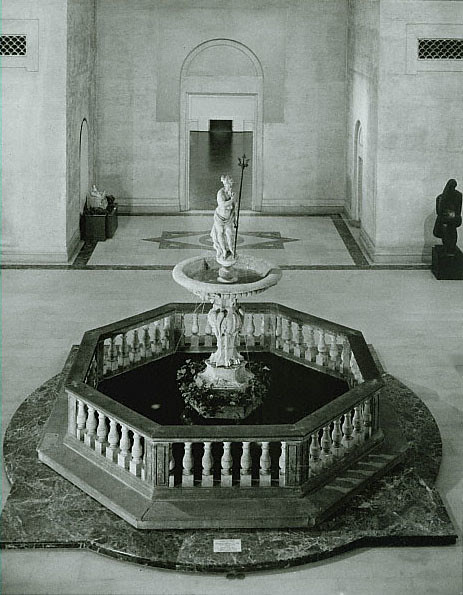 The Neptune fountain by Renaissance sculptor and architect Bartolomeo Ammanati replaced LeBeaume's in 1958 although the the marble base for the former was retained. 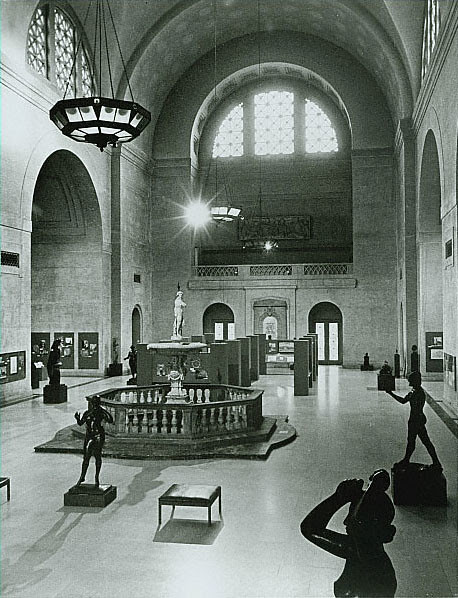 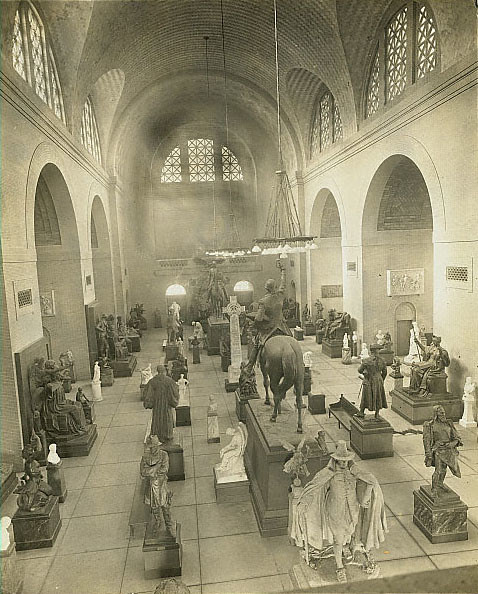 From the time of the fair in 1904 through about 1920 photos show Sculpture Hall packed with a seemingly ridiculous number of works. This type of crowded presentation for both sculptures and paintings was common practice for museums at the time. All historic photos from the St. Louis Art Museum's history page.
Posted by Vanishing STL at 7:00 AM

This is a wonderful post! I'm sorry to learn of the fountain's relocation. . . loved seeing these older images. The subject reminds me of a number of other fountains as centerpieces of buildings built around the same time. . .no doubt many are endangered in this way. I think of certain ones in Washington DC, for instance.

Whats up with these fools?? All those old pix of the museum show what a fantastically stylish Greco-roman space this used to be...finally they have successfully completed the dumbing down of the hall. Now it looks line a bunch nothing which of course is fittng for St Louis these days.