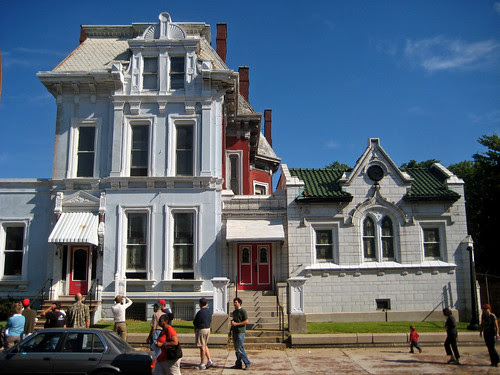 The former Leidner Funeral Home at 2223 St. Louis Avenue
Less than three blocks separates two very similar buildings on St. Louis Avenue in the St. Louis Place Neighborhood.  Both are began as high Victorian mansions on St. Louis Avenue's "Millionaires Row" and both were later converted to funeral homes with substantial complimentary additions to the right side and rear of the mansions.  In the last several years though the properties have taken dramatically divergent paths as a direct result of their ownership.

The ruins of the rear of 1936 St. Louis Avenue
City records show the former Liedner Funeral Home at 2223 St. Louis Avenue under the ownership of the Greater Bible Way Community Church since at least 1997.  It is obvious that this stunning property has been lovingly maintained by its current owner.  Inside its beautiful woodwork, ornate plaster and stained glass are all in excellent condition.  The only minor issue with this building is that some of the plaster ceiling in the chapel addition has fallen due to a roof leak. 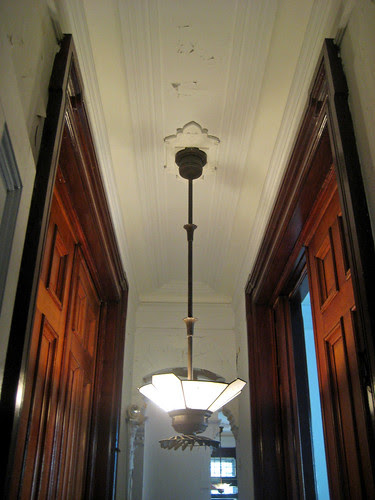 Last Saturday, Reverend Harsley of the Bible Way Church gave the Rehabbers Club a tour of the former funeral home.  This immaculately maintained building is currently for sale.  The Reverend said that the asking price for the entire complex which includes the 3-story mansion, chapel, parking lot and an additional lot to the east, is $280,000 which seems like an exceptional value. 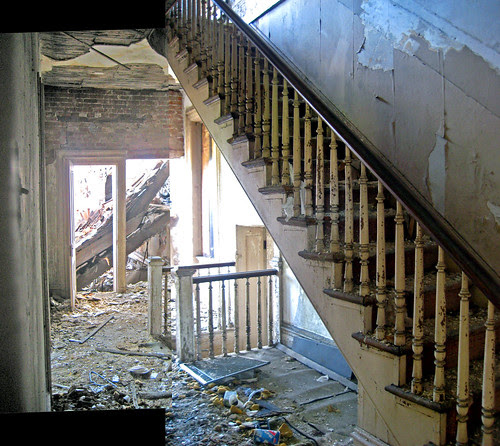 A few blocks east, it is like you are in a different world.  The beautiful former mansion turned funeral home at 1936 St. Louis Avenue stands half in ruins due to the blatant neglect of its owner Paul McKee.  Brick thieves began attacking the garage portion of the addition at the rear of the property and McKee did nothing to secure the property or otherwise prevent further destruction.  As a result of McKee's indifference, brick thieves have been allowed to attack the building unfettered, destroying the rear of the addition as well as the rear wing of the original mansion. 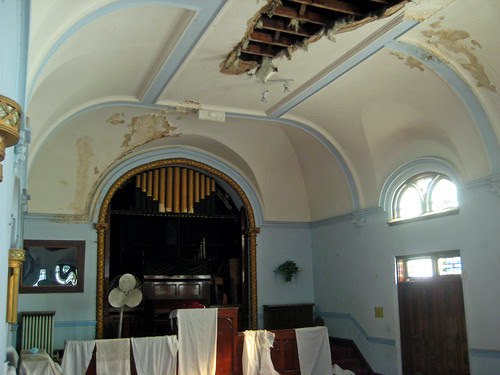 The chapel at 2223 St. Louis Avenue
So far McKee has shown little ability to understand how to do development within existing urban neighborhoods and certainly has shown zero ability or desire to protect or even minimally maintain the hundreds of historic buildings that he owns and is ultimately responsible for.  Instead of giving $398 million of public money to McKee, right now I would feel confident giving it to Reverend Harsley  of the Bible Way Church. 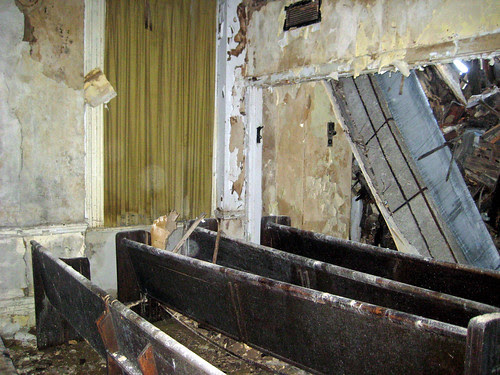 The chapel at 1936, most of which is now a pile of debris
Wednesday evening at 6:00 PM is McKee's TIF Commission hearing where he will ask the City of St. Louis to financially back-up his shaky plan to the tune of $398 Million.  The hearing will be held in room 208 at City Hall.  More details can be found here.  If you care about the financial future of the City, please come to the hearing and testify against this proposal.
Posted by Vanishing STL at 7:33 AM

This is very well done. The contrast is quite stark.

What bothers me about the contrast that's brought to light in this article is that blaming Paul McKee is too easy. What about blaming the individuals that stole the bricks from this building? What about blaming the city planners that helped push out individuals back in the day that took pride in buildings like this? What about blaming a police force that is either too lazy (their fault) or too busy (everyone's fault) to care about the theft of building materials? We have two choices with what to do with this city. We can either actively invest, renovate, maintain if possible, raze where necessary, and drag ourselves back to a point where St. Louis is known as a great city again. Or, we can all stand around, bemoaning the plight of St. Louis while defending beautiful buildings in UGLY neighborhoods, and doing our best to play political whack-a-mole with anyone that isn't content to watch St. Louis become another Detroit. As the owner of a beautiful 111 year old home in Shaw neighborhood, I'd vote to tear it all down if it means my kids can have a safe, crime free place to play.

Seriously, I think a documentary should be made about these brick thieves. Who are these people and what are they doing with the bricks? They've sacked so many houses. The police should start tagging bricks on vacant houses to see where they abscond to in the night.

Vacant buildings don't cause crime and social issues; they're largely a result of these.

Blowing off the loss of valuable reinvestment opportunities such as the above funeral home ignores the fact that no St. Louis neighborhood has revived without stressing its one asset over anywhere else in the region: its historic and unique built environment.

The fact is, McKee's attorney wrote a state tax credit (Distressed Areas Land Assemblage Tax Credit, or DALATAC) that will reimburse him for all costs of land acquisition as well as demolition. If he wanted to get neighborhood residents on board with his project, simply boarding and securing the homes (which he'll again later get back through DALATAC) is not too much to ask for.

Now, I agree with you that it's not only McKee's fault, especially considering the neighborhood was in severe distress when he came in. But well-capitalized big name developers should bring to the table the possibility of salvaging these historic buildings and protecting them from further decay. Instead, several properties have been vandalized, burnt down, destroyed, and demolished under his ownership; many were purposely emptied of their occupants.

McKee deserves considerable scrutiny for his property management. It's one thing to call a struggling neighborhood like St. Louis Place an "UGLY neighborhood" with beautiful buildings; but it's another to say that the residents who have stuck with the neighborhood throughout its decline deserve to suffer through an accelerated disintegration of their neighborhood.

I'd vote to tear your 111-year old Shaw house down too if it solved the problems you mentioned indefinitely. Fortunately for us, it's usually your occupied, renovated 111 year old houses that stabilize neighborhoods!

While it's true that vacant buildings don't necessarily cause crime and social issues, they definitely don't act as any kind of deterrent either.
While I do agree that "simply boarding and securing the homes is not too much to ask for" is true in most scenarios, the majority of these properties are in neighborhoods where chain link fences topped with razor wire wouldn't stop undesirables from breaking in and destroying them. Add to that the fact that (even in the best condition) buildings just like my home are often (from an economic standpoint) huge losses when considering renovation / restoration vs replacement, especially on the economic scale that is required to attempt to revitalize not just a block, or a neighborhood, but hundreds of acres of cityscape. I'd love nothing more than to see a developer be able to lovingly cover every block structure by structure to make sure that whatever is salvageable can be saved, but the unfortunate economics of that would turn any project into a financial impossibility.
I feel for the people that have stuck around and tried to make the best of these neighborhoods, and for the loss of the amazing historic buildings (even the ones that were rotting deathtraps before Paul McKee came around) but sometimes even the prettiest tree gets cut down when you're trying to save the entire forest from disease.

The decaying building was originally Beiderwieden North Mortuary...they also operated a location on Chippewa that was a beautiful Dutch Colonial building, it became Beiderwieden Hoffmeister Wacker Helderle for a time in the 90s...the building on St Louis Ave was closed in the early 70s, was operated by an African American firm for a time and has been vacant for years.

Thanks for the info David!