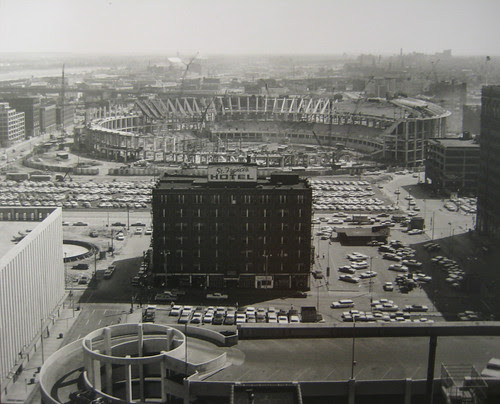 With the recently announced proposal for the complete replacement of Kiener Plaza and the Morton D. May Amphitheater (commentary about that coming soon) I was thinking about what the blocks were like prior to construction of the public spaces that we enjoy today.
Last night I attended the opening for St. Louis Through the Lens, the Irv Schankman Memorial Photography Contest which is on display through December 5th at UMSL's Gallery 210.  The show is well worth the trip, and for Metro riders, the gallery is conveniently located in just steps from the UMSL North Station, east of the Touhill Center.  In the hallway outside the gallery, is a nice display of a few dozen of Schankman's photos from the Missouri History Museum's collection.  The image from above, either late 1965 or early 1966, captures the construction of the previous Busch Stadium as well as the block where the Morton D. May Amphitheater (visible because the Kiener west garage has yet to be built).  Peeking around the corner of the Kiener east garage, form work can be seen for the Kiener Plaza fountain. 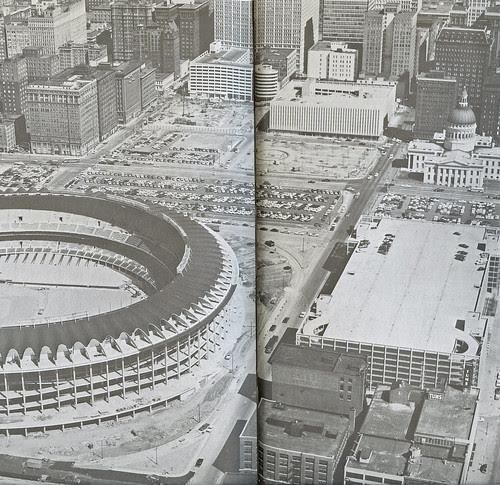 Months later in 1966, the St. Francis Hotel is gone, Kiener Plaza and Busch Stadium are nearing completion and site work has begun for the Kiener west garage.  Real Estate Row to the west would remain unscathed for only another seven years.  Falling like slow dominos from north to south, The elegantly skinny Holland Building would fall in 1973, followed by the DeMenil in 1976 just north of the surviving Wainwright.  Finally in 1984 after much debate, the Title Guaranty and Buder Buildings would be imploded for half-assed extension of the Gateway Mall.  After almost two decades since Kiener was constructed, in 1987, the Morton D. May Amphitheater would replace the surface parking lots just west of Kiener Plaza.  Photos above and below are from This Is Our St. Louis, published in 1970. 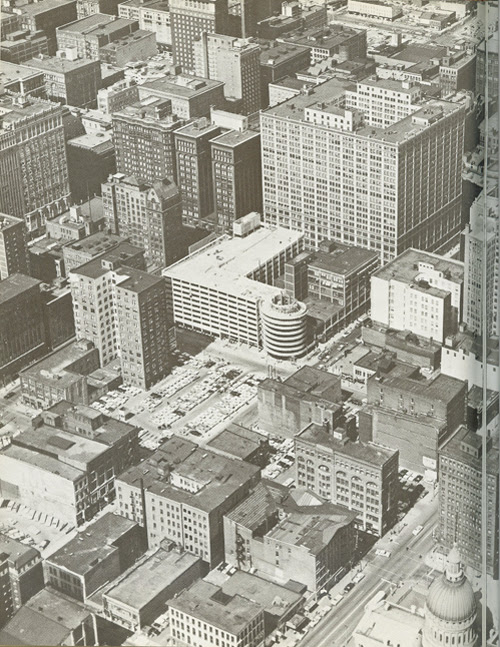 The striking photo above shows a remarkably different Downtown from the open spaces, shiny glass towers and seemingly endless parking garages we know today.  This Downtown which still existed as recently as half a century ago was dominated by historic buildings, which while already eroding away in this photo, still fairly seamlessly held the Central Business District and South of Market knitted together as one continuous urban core of St. Louis

Posted by Vanishing STL at 9:20 PM

Paul, viewing your threads is like spotting an ex-girlfriend walking hand-in-hand with her new boyfriend.

Past generations really did a job on our great city. It's miraculous that so much still remains. Unfortunately, St. Louis continues to provide plenty of new material for your blog, and that's a mighty shame.

The 1966 picture of Busch looks way to familiar of the 2009 version of Busch, that being empty space north of the ballpark. Lets hope it doesn't take 20+ years to put something there.