CVS and the AAA Building CAN Coexist 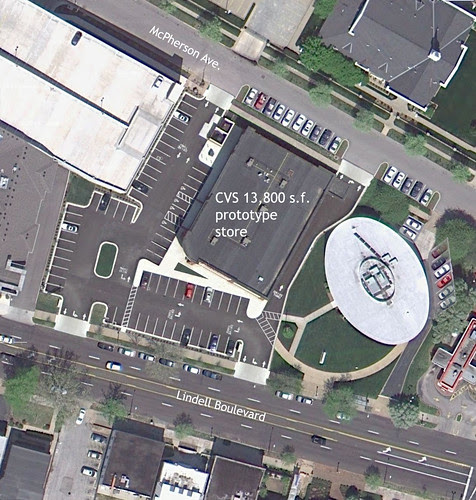 Last week it was announced that the unique oval shaped AAA building on Lindell Boulevard just west of Vandeventer would be demolished and replaced with a new CVS pharmacy. AAA would move to a new smaller building to be built adjacent to the new CVS. When asked about the possibility of CVS using the existing AAA building, an obvious candidate for a Lindell Boulevard MCM historic district, the developer responded that CVS has "a prototype building that they like to build" (quote from the Post-Dispatch story). No surprise there.
Looking at the existing AAA site though some may be surprised to learn that the land west of the oval shaped AAA building (all owned by AAA) is large enough to accommodate a full size 13,800 s.f. CVS prototype store including the drive-thru AND the SAME number of parking spaces as their prototype.
In the photoshopped site plan above, I used the relatively new 13,800 s.f. CVS store located at Gravois and Hampton/Germania near the River Des Peres as the model (the Post reported that a 13,000 s.f. store would be built). Using standard parking stalls and drive dimensions, I was able to fit 65 spaces, which is equal to the the Gravois model store. While I normally would never put the parking in front of the building, in this particular case, the odd shape of the parcel combined with the desire to keep the parking contiguous dictated the layout. Also, lets face it, while the AAA building is great, its location on the site, with an approximately 55 foot setback, is very suburban in nature. Pulling the new CVS building back would better preserve sight lines to the AAA building from Lindell.
In addition to the standard 65 parking spaces (4.71 spaces per thousand square feet of retail, which is generous by City standards) street parking is available on Lindell, McPherson and some spaces can be added behind the AAA building off an existing drive. Combined, a total of 30 additional spaces are available to serve the existing AAA building, which would more than accommodate AAA's needs. The City's Geo St. Louis site lists the AAA building as being only 6,544 s.f. With AAA's setback, it would be possible to get another 12-15 spaces in front of their building, but with ample parking already, I thought it was best to not destroy the view to the building and preserve some green space. 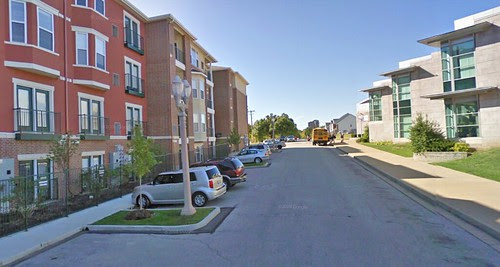 Street parking on McPherson west of the AAA property
You may think the spaces on McPherson are a bit odd, but this exact configuration is found on McPherson behind the 4 story mixed use apartment and retail building just to the west. This block of Mcpherson gets little traffic, with Metro High School, a Mormon meeting house, which happens to have two large highly underutilized parking lots, and the apartment building as the only properties fronting the street, so in this instance, the odd configuration works fine. View east on McPherson along the AAA property
This site plan is far from perfect, in fact as I was completing it I was thinking it would be better to mirror the CVS so that the drive-thru is on the west and parking to the east, which would open up better sight lines to the AAA from Lindell. It shows though that CVS can have their prototype store, their parking and their drive-thru without destroying the unique AAA building. Sometimes its possible to have your cake and eat it too!
Posted by Vanishing STL at 6:40 AM

Won't they argue there won't be enough parking for both AAA and CVS customers?

Paul, have you sent this to anyone at CVS or to alderman Kennedy?

Chris, If the City's website is correct about the size of the existing building, the additional 30 spaces on top of the 65 provided for CVS would provide 6.4 spaces per thousand square feet of space, which is comparable to suburban standards for retail or office.

Adam, I just sent this to the Mayor's office and Terry Kennedy and will be sending to the developer in Indiana tomorrow.