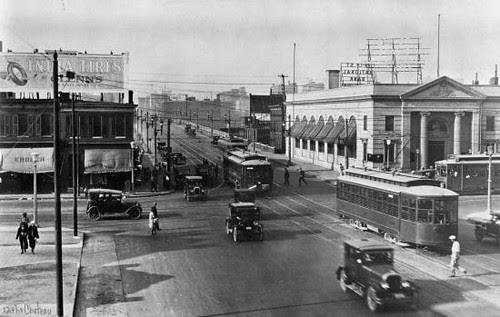 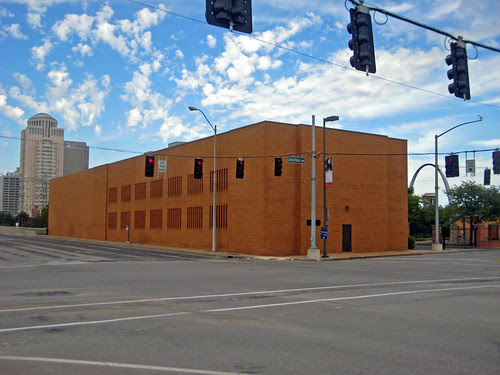 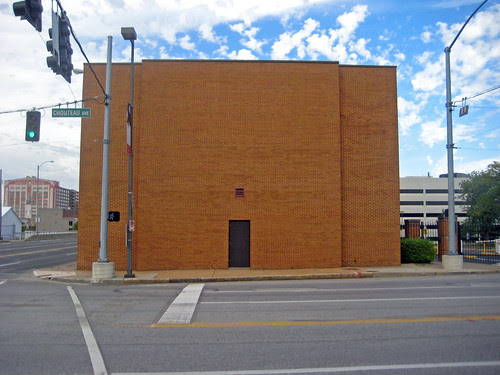 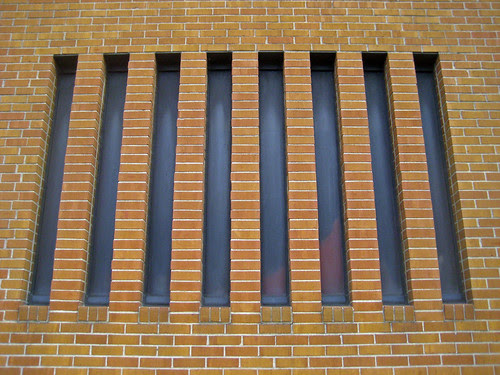 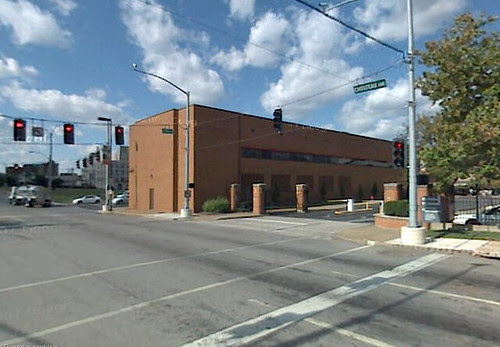 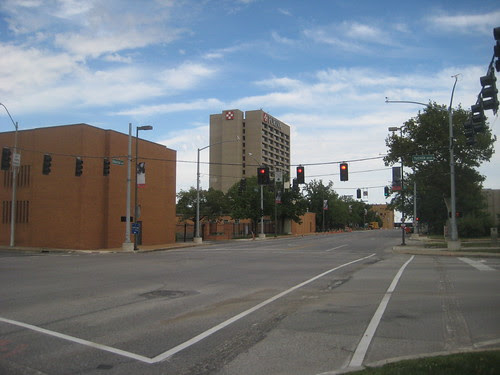 I wondered what could be housed in this horribly re-muddled brick box? Maybe computer servers?, maybe the campus maintenance department? There is no signage on the public facades of the building even indicating it is part of Purina or what it contains. I was quite surprised to learn after a quick Google search that 1111 Chouteau is home to Checkmark Communications, Nestle Purina's in-house creative communications and design agency. What!? The staff of "creative communications and design agency" of a major corporation are housed in this thing? Maybe there would be more creativity going on if the orange brick skin was ripped off and those wonderful large windows opened again.
Posted by Vanishing STL at 7:00 AM

Paul, you must be psychic. I just passed this building yesterday and wondered what the hell someone was thinking when they built this block of horror. I had no idea that there's actually a beautiful historic building underneath that psychosis-inducing monstrosity. Someone should definitely be arrested for allowing this to happen. That said, at least it still fills the corner street grid, which is more than can be said for the other corners at 12th & Chouteau.

Egads! This might be the worst make-over ever. The 'creative' minds there should revolt and demand a re-design.

is it possible that the original facade is still intact underneath the bricks?

The new facade is longer than the original. Just sayin'.

Right, it is longer in the back. Is that an addition or another building that was modified?

But note the slight protrusion on the front of the Chouteau facade. It comes out the same distance as the original pediment.

Adam, yes it might be possible to remove the orange brick sheathing. There would likely need to be re-building of the projecting cornice band which was likely hacked off. The was done to the former Post Dispatch Building at Tucker & Olive. It had been sheathed in aluminum curtain wall. Here's an old image of the building:
http://tinyurl.com/279jnzj

Fowler, yes, the building has been added onto at the rear.

Janet, thanks for catching my typo!

Geez, your site is too depressing. I can't believe the atrocities that are allowed to occur in demolishing or "modernizing" all the buildings you mention.

Is there any thought that Nestle/Purina might actually be open to such a restoration, or is that more of a dream?

I don't know. I would bet no one has ever asked them. I would also bet that since it was altered some time ago... I would guess sometime in the 1970's that most there probably have no clue that there is something under the skin of the building.

It would be a fairly pricey restoration, since I would guess that anything projecting from the face of the building would have been chiseled off.

Just let the brick robbers know and it will be stripped real fast!