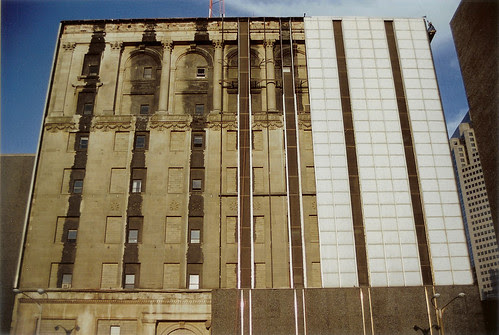 Comments on my previous post about the building at the northeast corner of Tucker and Chouteau inspired me to find some photos I took of the former Post-Dispatch Building several blocks north at Tucker and Olive. Many of you probably remember this dramatic transformation in 1999, when the metal curtain wall slip cover was removed revealing the stone facade beneath. 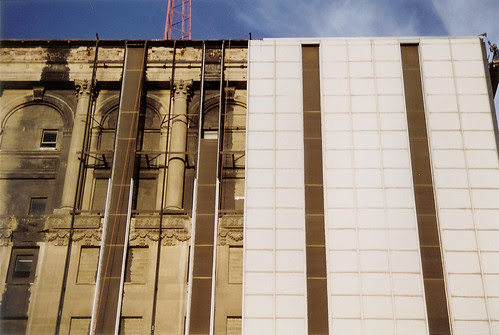 The hidden Beaux Arts Classical designed building by George D. Barnett (who also designed the Arcade Building) had been completed in 1917 as the new home of the St. Louis Post-Dispatch, the leader amongst several competing St. Louis newspapers. In 1960, the Post-Dispatch vacvated the building, moving to a larger building several blocks north at 900 N. Tucker Boulevar. New owners of the building must have been looking for a way to compete against newer modern office buildings rising Downtown and in the emerging business district of Clayton. Their answer was to fill in all the large windows with cinder block, cover the upper floors with a metal curtain wall and encase the lower two floor with black pre-cast concrete panels. The tiny remaining window openings were less than a quarter of the original size and hidden by metal mesh strips in the curtain wall. 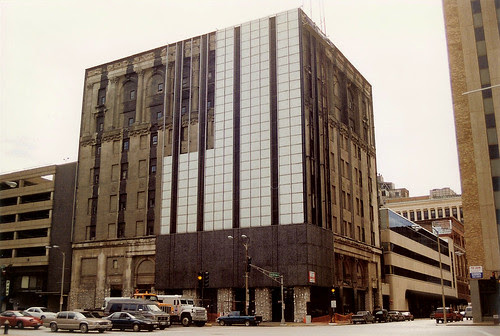 Thirty four years later, in 1999, the re-muddling was stripped away and the building was placed on the National Register. Historic Tax Credits were used to fully restore the building including re-building missing stone details and parts of columns at the first floor, new historic replica windows and storefronts. While the original balustrade parapet was not re-built, a new cornice made of modern materials to resemble stone was included. 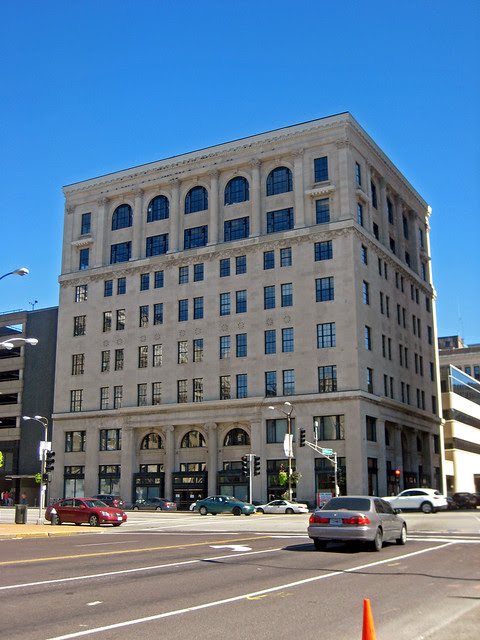 The former Post-Dispatch Building today. Other than some slight color variations in the decorative band course between the sixth and seventh floors, one would never guess that this beautiful building was hidden for over three decades. 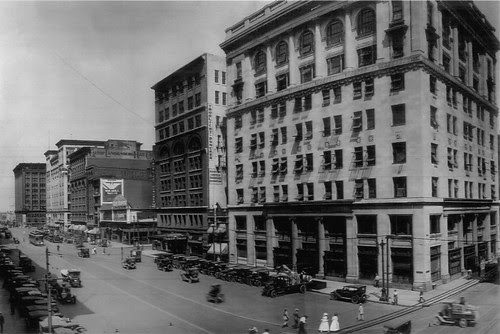 Tucker Boulevard circa 1917 - Photo from the building's National Register nomination. The nine story building to the north as well as the tiny two story between have been replaced by a parking garage. Farther north, the former A.D. Brown Building, now the Meridian is the only building that has not been demolished or truncated. 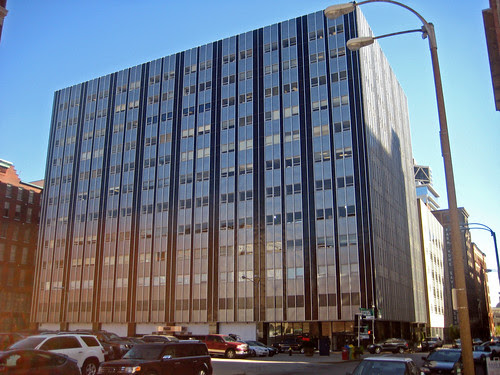 One block to the north and east at the northeast corner of 11th and Locust is another building early 20th century building which was "modernized". The Locust Building, which is home to the City's Community Development Agency and the St. Louis Development Corporation, at least retains the same number of windows as it did originally, although the height of the windows was reduced to a dimension slightly taller than the brick bands between the originals. There are no plans to unsheath this building, in fact the current owners have made some improvements in the last few years in keeping with the current modern design of the building. 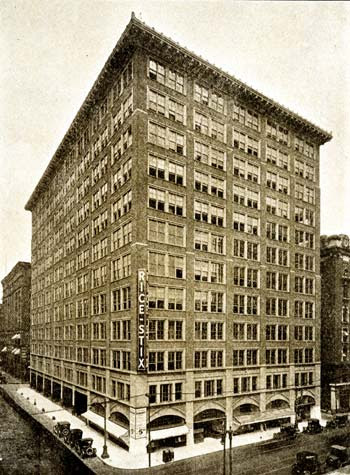 A photo of the building prior to its covering with aluminum curtain wall. The photo is from the former owner's now defunct website which gave a brief history of the building. The concrete frame structure was built as an annex for the giant Rice-Stix dry goods company which had previously built the Merchandise Mart building on Washington Avenue. A five story bridge still connects the upper floors of the two buildings. Rice-Stix also built an annex that now houses the 10th Street Lofts.
Posted by Vanishing STL at 7:25 AM

Wow, that explains why I don't remember that building; it was covered up! Thanks Paul

I would never have guessed the ugly buildings that line Tucker would be hiding such beautiful secrets...wow.