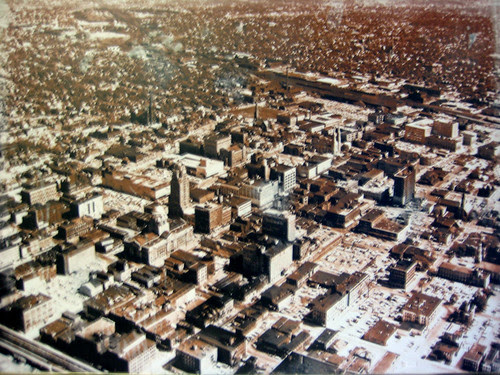 Earlier this week I traveled to Fort Wayne, Indiana to look at buildings in their downtown for possible conversion to residential lofts. Downtown Fort Wayne has several new developments that are breathing much needed life into the the city's core including a new baseball stadium for the minor league Tin Caps (who previously played in a suburban location), a new convention center and a new hotel going up nearby. What downtown Fort Wayne lacks though is downtown residents, but the current mayor Tom Henry is trying to change that. As part of the stadium project, a developer promised to build a new condo and retail development overlooking the new field, but has failed to start the project. Hmmm, sound familiar?

Somehow this smaller city managed to completely miss the nation wide housing boom that started around the millennium and came to a crashing halt last year, leaving the downtown area with almost no housing except two 60's modern apartment highrises in the northeast edge. With new stadium condo deal dead for now, the mayor is trying to get developers to convert older buildings with the use of historic tax credits, like St. Louis has been so successful in doing. The problem: there aren't many buildings left downtown! Previous administrations allowed Fort Wayne's downtown to be turned into an almost un-ending sea of asphalt. Driving into downtown (and Googleing beforehand) I was absolutely stunned at the amount of surface parking permeating the majority of the blocks. Of the actual built structures, that do exist, the percentage of either stand alone parking garages or buildings with large integral garages also seemed high. The number of existing buildings ripe for residential conversion is very small. 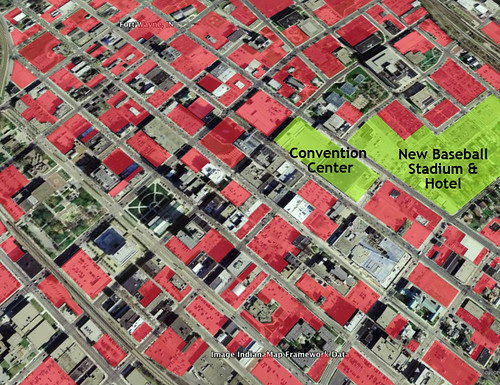 Downtown Fort Wayne today. The red areas are all surface parking,
parking garages, lawns (non-park space) or vacant land.
The lessons from Fort Wayne are that we should continue to fight to prevent the loss of our built environment for lesser uses like parking lots. The other lesson is that we have more here in St. Louis than we sometimes realize. Sometimes we here in St. Louis have a tendency to beat ourselves up, especially when we experience a loss...I know I am guilty of this, and occasionally some even threaten to move away. We should to remember that although we have lost many great buildings, we would be hard pressed to find what we have left in any comparable city in the US. We need to keep fighting to keep what makes St. Louis unique. We will never be New York, San Francisco or Chicago, but they will never have our affordability, quality of life or our buildings.

Posted by Vanishing STL at 6:20 PM

Interesting thoughts and conclusions. Funny thing, the percieved lack of parking in the downtown area remains a hot topic of debate in Fort Wayne. In looking at your map, it appears that we have nothing but parking!

Did you show this to the mayor?

Damn! What a great graphic; hopefully STL wakes up before it is too late.

Good lord, what are they driving? Does every man, woman and child own a Humvee?

A stunning graphic, indeed. I grew up in and around Fort Wayne, and remember the stores and spaces of a very nice downtown. In the '60's, it was a treat to go downtown, shop for school clothes and have a nice lunch. In the early '70's, two hotels, the Keenan (for Fort Wayne, a high rise) and the Van Orman were demolished (for pictures and the sad stories, see http://fwnextweb1.fortwayne.com/ns/projects/history/scapes46.php). The latter is still a parking lot, close to 40 years later.

I live in Huntington - a small town outside of Fort Wayne - and often travel to Downtown Fort Wayne and other parts of the city. The sad thing is that the city has fell prey to a great deal of suburban sprawl. And have encouraged more sprawl by annexing a newer development on the southwest side - mainly because it was a middle/upper-class neighborhood. Now they are struggling trying to maintain the core and provide services to the newer annexations.

I believe much of the doughnut effect occurred near when IUPUI moved out of downtown in the 50's. Instead of going a vibrant downtown culture with students arts etc, it pulled commercial and residential opportunities our with it - including IVY Tech who made a campus across the street/next door.

My hope is the parking lots downtown can be sold off to developers and new buildings can be built. The city has the opportunity to has a unique and attractive mix of new and old. We will see.

The sad thing is that the city has fell prey to a great deal of suburban sprawl.
--
Jenifer
Get the best FREE offers on the Best Home security Systems

Just Curious, did you end up finding anything in Fort Wayne? I'd love to see an outsider's prospective on what can be achieved with what is left our old buildings.

Yes. The developer we are working with is considering several buildings.