An Unrecognizable Block of Washington Ave 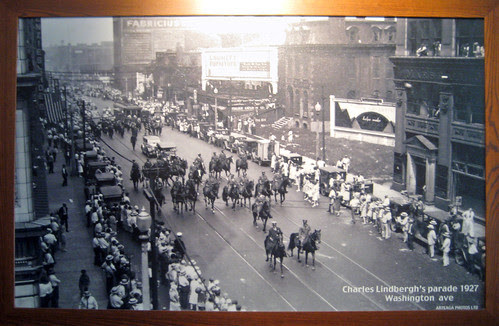 Washington Avenue in 1927.  Original photo from Artega Photos LTD.
Last Monday night after the St. Louis Demolition Board meeting finally ended with the vote to destroy the San Luis, a group of us who testified headed to the Side Bar on Washington for much needed food and beers. On the long wall opposite the bar there are several oversized photographs of Washington Avenue from the early 1900s

Most of the photos contain readily recognizable landmark buildings such the former International Shoe and nearby loft buildings or the former Stix Baer & Fuller Building (Dillards) which still awaits transformation into The Laurel by Spinnaker. One of the photographs however still had me stumped after the 3rd or 4th time seeing it. The photo above shows a streetscape in transition from a once fashionable residential area to one filled with commercial loft buildings. 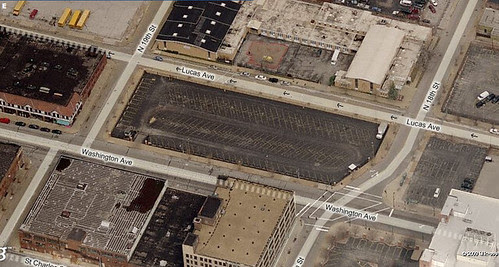 I asked one of my friends who is an expert on historic St. Louis buildings and she did not recognize anything either. We both continued to be without an answer as to the photos location. Is it in Midtown, close to Compton or Grand?... or maybe its farther east? Finally, after standing on a bar stool for a closer look, I recognized the fuzzy outline of the Tudor Building in the distance near the upper left of the photo, and realized that the photo was the north side of Washington from 18th to 19th Street. The reason the photo was unrecognizable?... because nothing is left. The entire block is an asphalt surface parking lot.
This dead block plus two more surface lots on the east corners at 18th creates a huge physical separation between the good things that have happened west of 19th Street and the greater loft district east of 18th. Hopefully one of Bob Wood's projects under construction across the street will help bridge this divide.
Posted by Vanishing STL at 6:05 AM

What a shame. Imagine if that block still had dense buildings with storefronts.....

They didn't vote to demolish the San Luis. They stated clearly that that wasn't up for a vote.

They voted to allow the Archdiocese to go ahead with the planning of the demolition. However, there will still be a hearing on a final decision.

In other words, there is still a chance to save the building.

Angelo, I spoke to Kate Shae just this week, and it is her understanding that she is compelled to approve the demolition permit for the San Luis when it is applied for without an additional hearing. If you have different information, please email me at hohmann1@mindspring.com

I am quite confused, if the San Luis can be demolished without the Preservation Board's approval...why was it even brought before them in the first place?

Do they just give permission to Aldermen to allow demolitions?