Just five blocks east of the livery stable currently being demolished on Locust lies an entire block of vacant land. Until August 1995, the southeast quarter of this block bound by the corner of Locust and Ewing (TE Huntley) was occupied by the parish of St. Charles Borromeo. The buildings were originally built in 1867 for S. John's Methodist Church, and they remained until 1901, when they built a new building at Kingshighway and Washington. In 1902, it was sold to the newly created St. Charles Borromeo parish, who occupied until its closure in 1982. 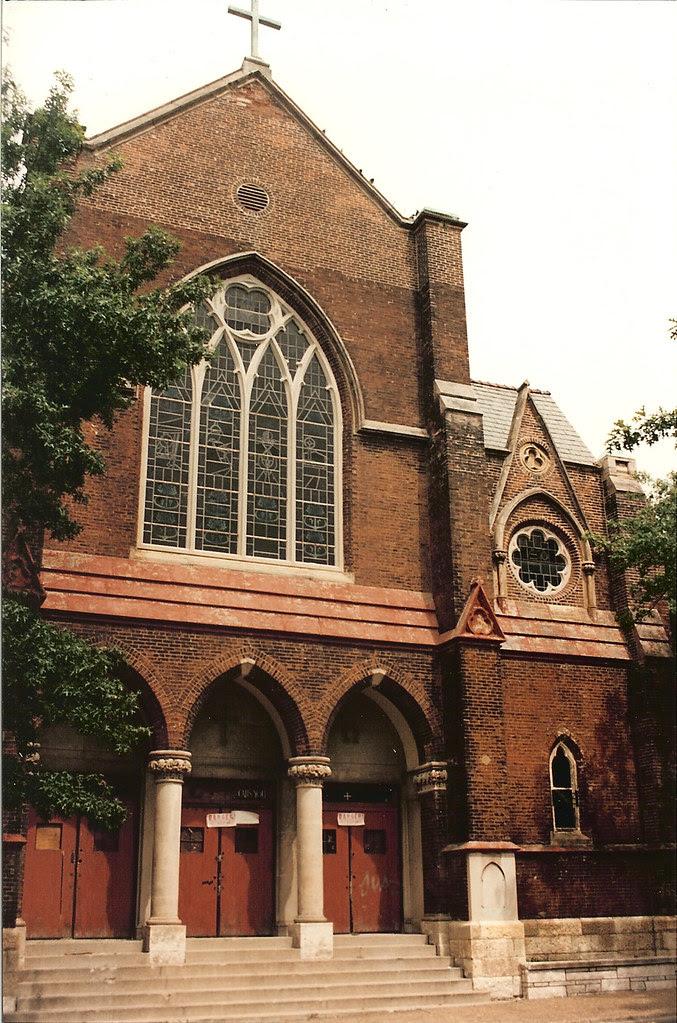 The church sat vacant for many years and was not well secured. I do not recall who owned it at the time, but I do not believe it was the Archdiocese. With its location so close to the Harbor Light center, its probable that it was frequented by homeless squatters. At some point there was a fire in the parish hall which faced Ewing which must have weakened the roof structure. There was a visible sag in the middle of the roof, although the roof was not wide open. The sag in the roof got worse, and one day when I drove by, the entire section of roof had collapsed. 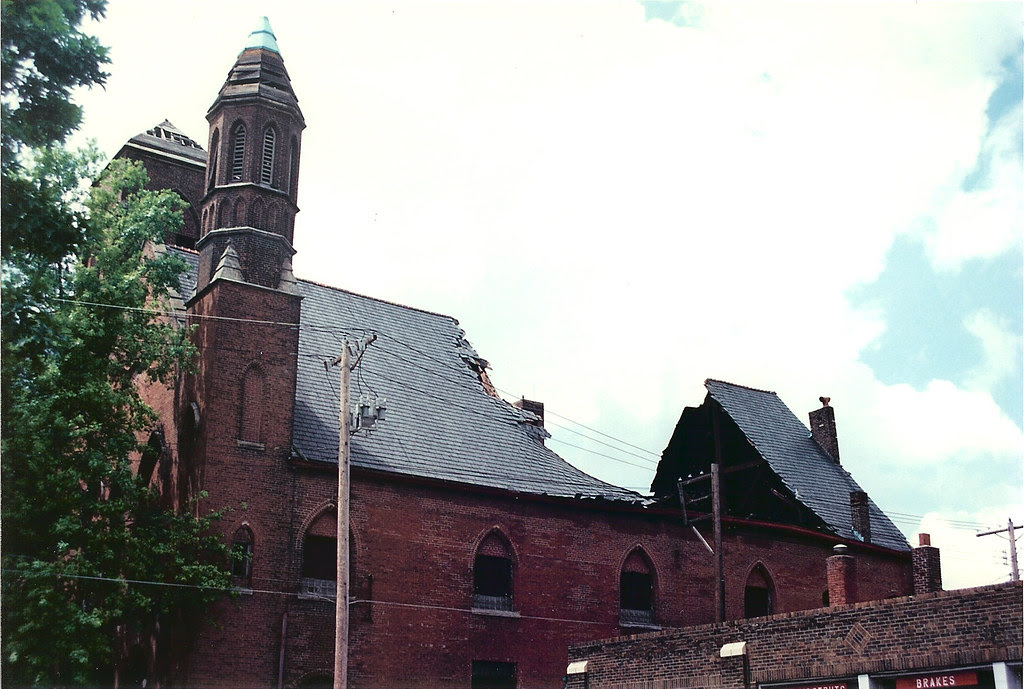 The roof structure consisted of large timber trusses spanning the width of the hall with the roof spanning the other direction between trusses. The failure of a single timber truss led to a collapse of the section of roof on each side. To make matters worse, this was also the section of roof that connected to the sanctuary structure that fronted on Locust. Not long after the roof collapse, the city condemned the building and the entire complex was demolished. 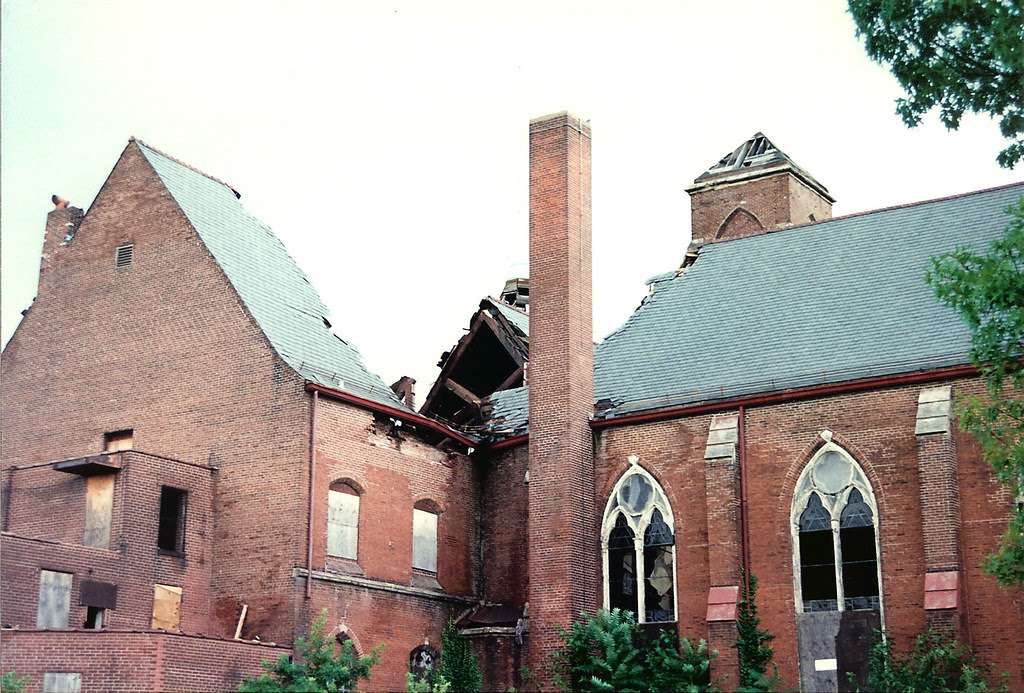 View of the collapse from the southwest. The sanctuary is to the right of the tall chimney. As devestating as the collapse appears, the rest of the building complex was stucturally sound. Given the right owner, even damage like this can be re-built and the building saved. 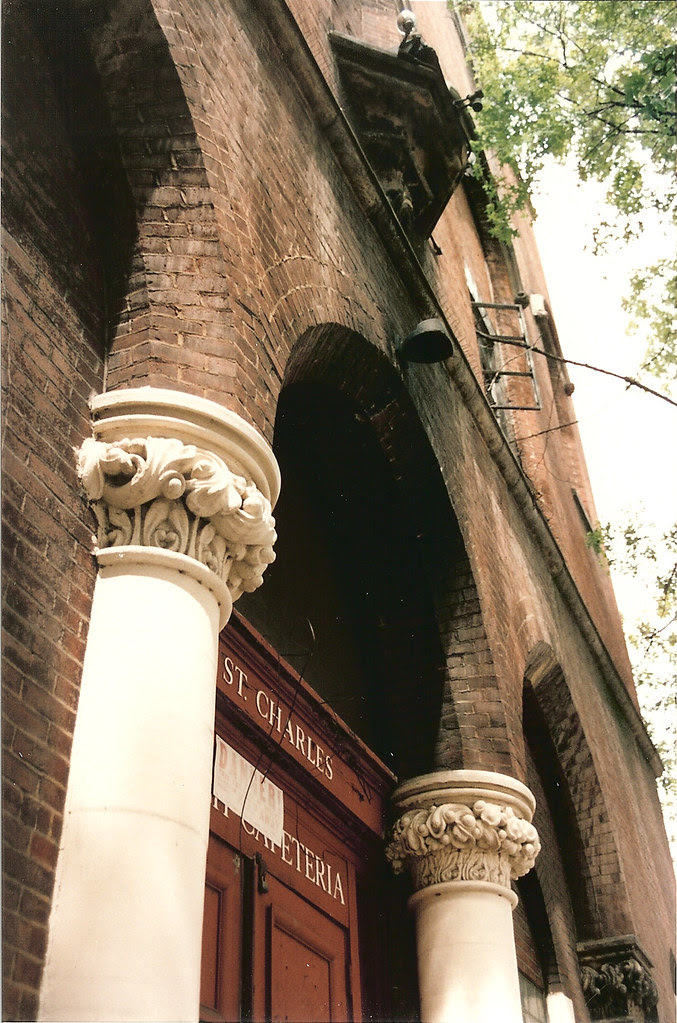 The entrance to the parish hall on Ewing with the condemnation notice tacked on above. The doors were unsecured, allowing me to get some shots inside. 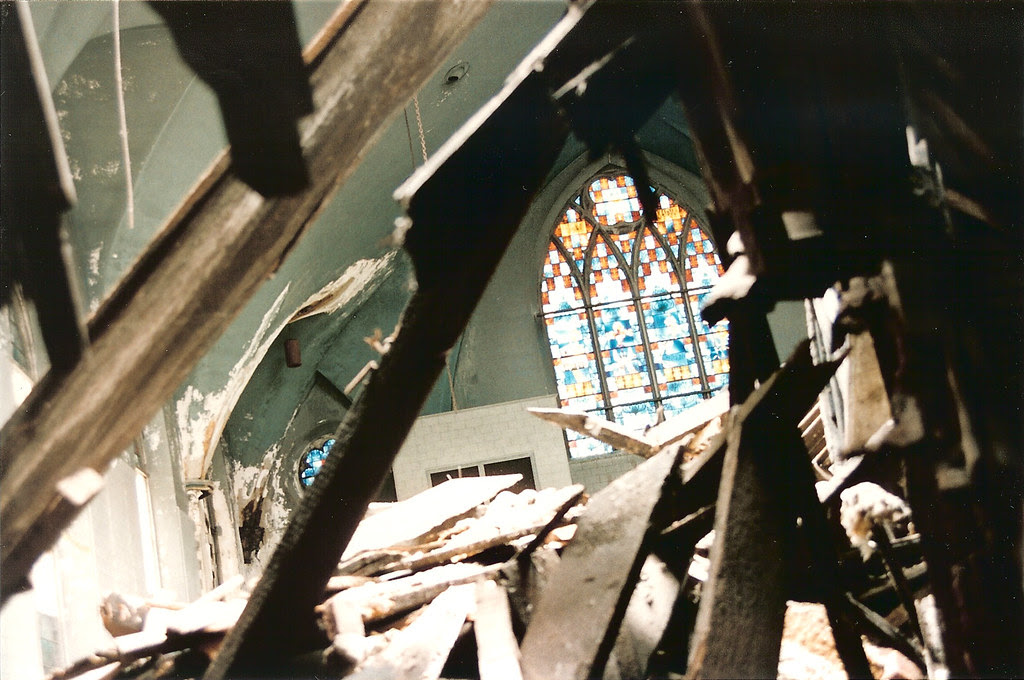 Looking through the wreckage into the sanctuary. The large stained glass window facing Locust is the same one in the first photo. 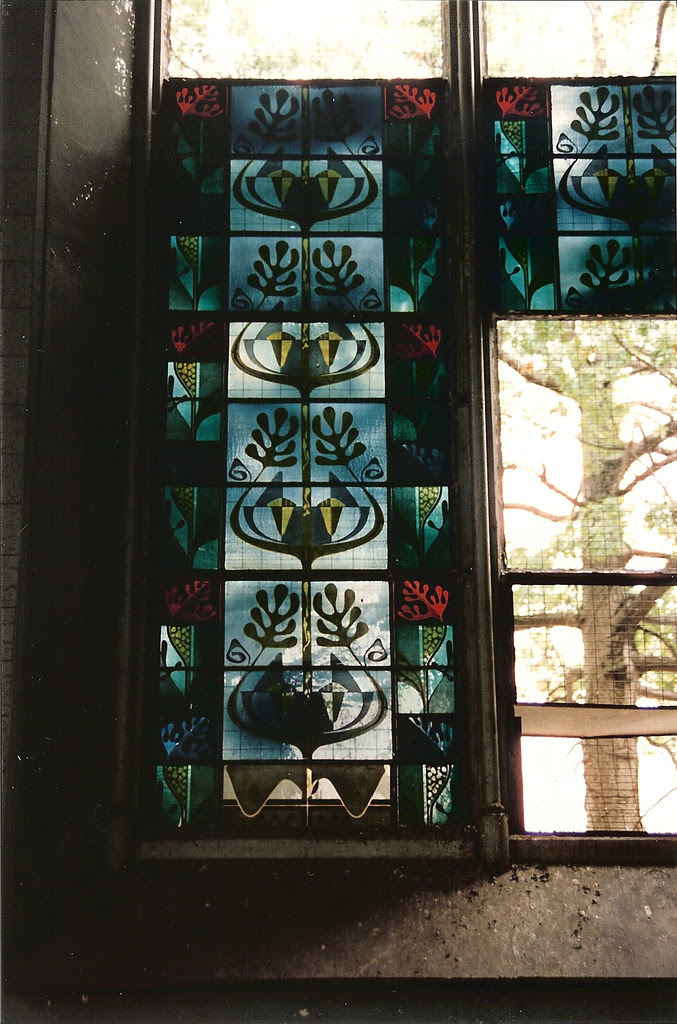 The sanctuary windows had panels of Matisse-like stained glass. 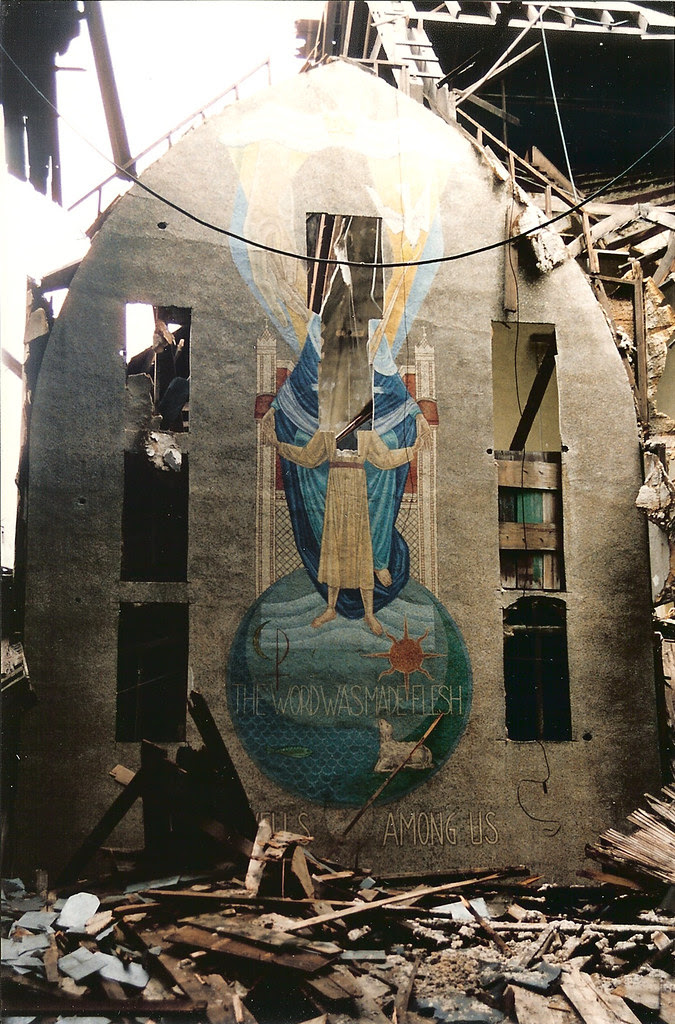 The front wall of the sanctuary, where portions of the large wall paintings had previously been cut-out. Above the wall can be seen the open structure of the parish hall roof and the opening left where the portion had collapsed.

Posted by Vanishing STL at 2:03 PM

I remember this building! I thought I had pictures but I have been unable to find them ---oh those non-digital days. This church had a nice presence on the corner. Some of the foundation can still be seen.

What a great anchor that could have been for the rebirth of the area. So sad...

damn. and I never even saw it.

Oddly enough, St. John's UMC closed its doors last month. I beleive the building will continue to be used by MCU ... worth sitting through church to see. Sneak into the chapel, too.

Wasn't this the Methodist church in the Lucas Place pictures with the tall Venice like bell tower?

Not sure. The only Methodist church listed in Landmark's church book near the Lucas Place area is Centenary UMC at 16th & Pine... but the book is by not a complete list of all churches. The book does say that St. John's organized in 1868, just after start od construction at 2901 Locust.

That stained glass, and the altar painting, look like 1950s-era alterations, in the same vein as a number of 1950s Catholic churches I've been documenting lately, such as Resurrection (http://builtstlouis.net/mod/mod11.html). Wonder if they're another product of Emil Frie and his collaborators?...

Please correct me if I'm wrong, but they don't look like Frei's work from the era when windows would have gone in here.

The windows are most likely 1950's replacements of the original windows of the church.

I was married in this Church on May 10, 1969 by Father Valentine. It was a beautiful structure!

Although the new Sacred Heart Church in Eureka is indeed beautiful, and although there is a new ecclesiastical architectural school coming into focus, architects lost their ability to build Catholic churches after World War II. To quote Michael Rose, everything from this era is "ugly as sin." Church architecture of the last 50 years has also been proven harmful to the spiritual formation and moral lives of Catholics since it has deprived them of the sense of the Transcendant they need when they come to church. Having said that, I ask sincerely, why can we not take down beautiful unneeded city churches brick by brick and reconstruct them in those suburban neighborhoods where churches are needed, instead of destroying these beautiful houses of worship and replacing them with K-Mart or bowling alley monstrosities that are as ugly as sin?

My grandparents were married here by Father Spigardi in 1904. They met at the St. louis World's Fair. Grandma's parents were Italian. Her husband was from Honduras. The wedding reception followed at the Terminal Hotel. I recall my father pointing out the church once as we drove past it on a trip downtown. I was a child then and didn't appreciate the historical significance it held. A few years ago I drove down and photographed the vacant lot where the church once stood. Thank you for sharing photos of this vanished gem.
Eva Kwapich

I just today learned that my grandmother was baptized at this church in 1906. Apparently my ggrandparents, Angelo and Rosalia Orlandi were parishioners. I am just devastated to see that it no longer exists. Such a great loss. I would have loved to have taken a walk through it for family history's sake.

That front wall isn't a painting. It is the 6 apparitions of Mary with Mary in the center and an unusual 12 year old Jesus in front of her with his "Sacred Heart" in his chest. My friends and I (The Archdiocesan Reclamation League) Led my Msgr. Matthew Mitas used concrete saws and remove as much as we could before the sale and/or wrecking ball. I am certain that these mosaics were developed and installed by the renowned masters Paul and Arno Heuduck of Ravenna Mosaics. You can see the apparitions pcs that we cut out of the wall in places like the foyer of Our Lady of Lourdes on Forsythe, The front of the Guadeloupe Church in Cool Valley, The Mount Carmel Convent has theirs somewhere. Fr. Mitas was able to place all 6 apparitions with their respective churches, however there was one in out-state Missouri. They finally came and got theirs. Most if not all of the New Cathedral mosaics were the work of the Arnos. See a section of a bio on the Revenna Mosaic Co. St. Louis and New York below.

Paul Heuduck (1882-1972) and his son Arno (1917-1989) were the mosaicists responsible for the manufacture and installation of most of the mosaics in the Cathedral Basilica of St. Louis in St. Louis, MO. Paul and his family emigrated from Germany to America in 1923 at the behest of his employer, the Berlin mosaic and art glass firm Puhl-Wagner. In the United states, Paul helped establish the Ravenna Mosaic Company, a joint endeavor between the St. Louis art glass studio owned by Emil Frei and Puhl-Wagner. The Ravenna Company was founded primarily to work on the Byzantine glass mosaics which were to fill the new St. Louis Cathedral.

Under the direction of Gerdt Wagner, Ravenna maintained offices in both New York and St. Louis during its early years. Many of Ravenna's important early commissions were executed in New York, including murals at Rockefeller Center, St. Batholomew's Episcopal Church and Temple Emanu-El. Frei amicably broke with Ravenna in late 1929 or early 1930. In 1935, Arno, who had studied art at Washington University, joined the company. Paul took full control of Ravenna when, in 1939, Gerdt Wagner abandoned the company to return to Germany, where he became a high-ranking Nazi propagandist.


The work of these folks below:

Thanks for this great information! I did not realize that the items cut out of the wall are mosaics. I'm glad they were able to be salvaged and installed in other churches.