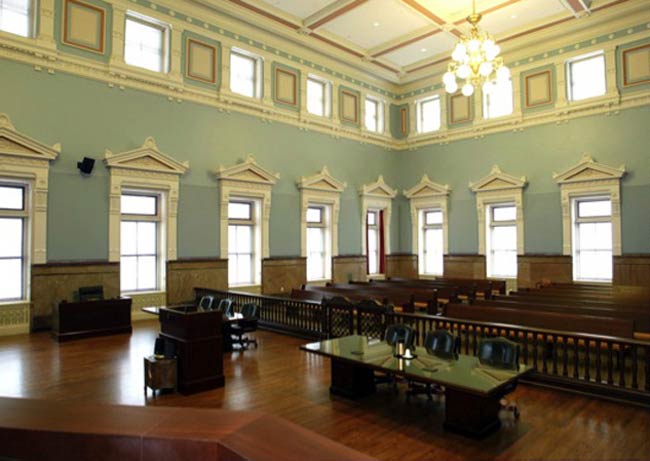 Governor Nixon's Missouri Tax Credit Review Commission announced yesterday that one of five public hearings being held as part of its analysis of Missouri tax tredits will be held here in St. Louis on Tuesday September 21st. The beautifully restored courtroom above of the Missouri Court of Appeals at the Old Post Office - 815 Olive Street will be the venue for the meeting at which public testimony will be taken regarding the future of all Missouri tax credits including the Historic Rehabilitation Tax Credit. According to the agenda of the 6 hour session, two blocks of time from 4:00-6:00 pm and 7:00-9:00 pm will opened for public testimony.
As most everyone reading this knows, the Missouri Historic Rehabilitation Tax Credit since its inception over 10 years ago has been largely responsible for the dramatic re-birth of Downtown St. Louis and the continued restoration of dozens of St. Louis neighborhoods. Nixon's Tax Credit Review Commission is under orders to look at all Missouri tax credits and establish a plan for drastic cuts by Thanksgiving. For the Historic Rehabilitation Tax Credit this could mean a lower cap, or worse, a limited allocation system similar to the Low Income Housing Tax Credit which would politicize the process and result in a dramatic drop in the number of buildings that are renovated along with the jobs and tax revenue that are created in the process. This would be a self defeating move for Missouri, but one that is very much on the table for implementation.
This is YOUR chance to stand up and be heard. Please come to one of the public testimony sessions and tell the Commission that Historic Tax Credits are crucial to Missouri's economy and must not be slashed.
Posted by Vanishing STL at 12:48 AM

This is good news and yes, the location speaks volumes!!! My concern, with the temporary stall of development plans in north St. Louis, do people realize that perhaps those who came out against what they did not really understand, shot themselves in the foot. Coming against NSR has only relagated these properties to being neglected for an even longer period of time prolonging development, condemning them to MORE neglect and decreasing the number of much needed jobs.

Glad to hear Clemens Mansion received it's funding and 49 people/couples will be able to live in an historic home. Not to mention a diamond in the rough restored. I'm wondering if some folk simply want to PRESERVE the Status Quo of degradation, decay and hopelessness over north. I'll be there with bells on!!! Tax Credits with the potential to produce are much needed!