Recent Losses in the West End 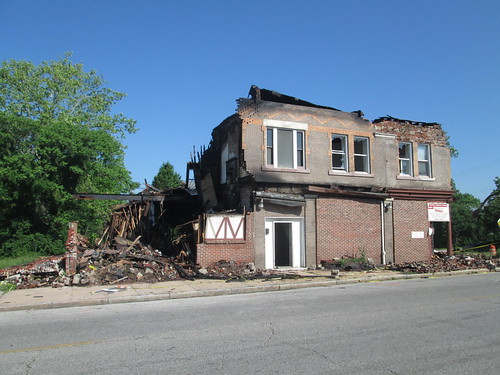 On June 1st I was on my way to photograph the Hempstead School at Minerva & Hamilton which had survived a fire the night before when I came upon this corner store and apartment building at Hamilton & Plymouth which had recently also suffered a fire with much more devastating results. The south half of the building had completely collapsed and the remaining portion standing lost its roof and was essentially gutted. 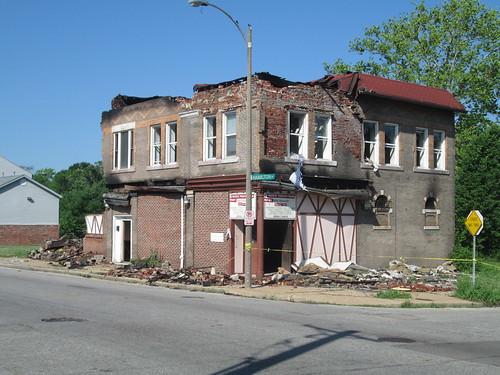 Unlike the South Side and older areas of North St. Louis, corner store buildings are a rarity in the West End. With the demise of this building, only two other mixed use commercial building remains standing within the West End neighborhood bound by Union, Page, Skinker and Delmar. The remaining buildings are located southeast corner of Hodiamont and Etzel and at the southeast corner of the five-way intersection of Julian, Etzel and Clara. Across the street, a building which was originally constructed as a theater remains in use as a church. The one-story B&B Supermarket also survives on Goodfellow between Maple and Vernon. Sanborn maps show that other conner mixed use buildings existed on Goodfellow and other side streets, but the majority of corners were originally occupied by houses or apartment buildings, which was the prevalent use constructed through the 1920's 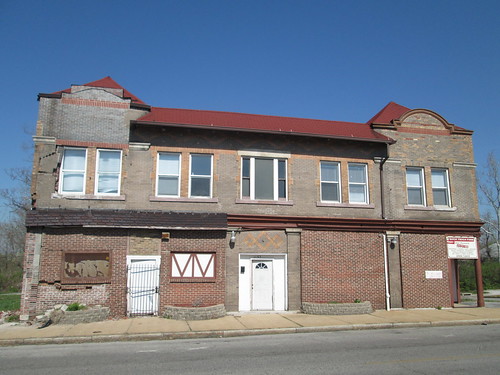 Before the fire, the building had some minor masonry issues at the southeast corner, and from studying the facade closely, it was apparent that brick work at both corners had already been re-built at least once. 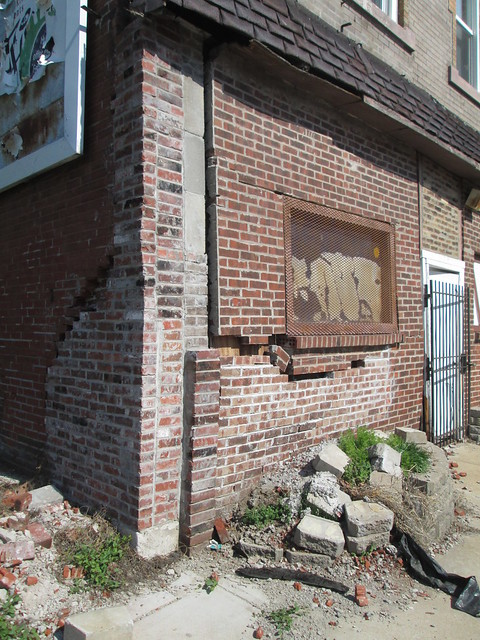 A close-up of the southeast corner shows some previous repair work failing possibly due to isolated differential settling of the foundation. 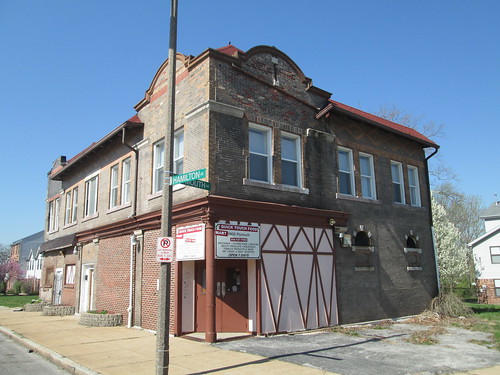 A pre-fire view of the building from the corner of Pymouth & Hamiliton. Glimpses of vinyl siding on both sides show how most of the buildings original context had long ago been removed and replaced with more recent construction. Portions of this suburban style apartment complex occupies all three of the other corners of this intersection. However just to the northwest across the street lies the Oakherst Place Concrete Block Historic District. 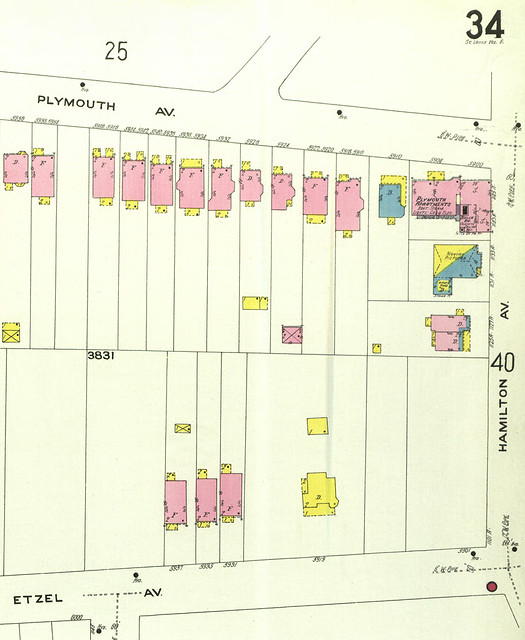 A 1909 Sanborn map of the corner reveals that what was left of this corner store building before the fire was only half of the original structure known as the Plymouth Apartments. 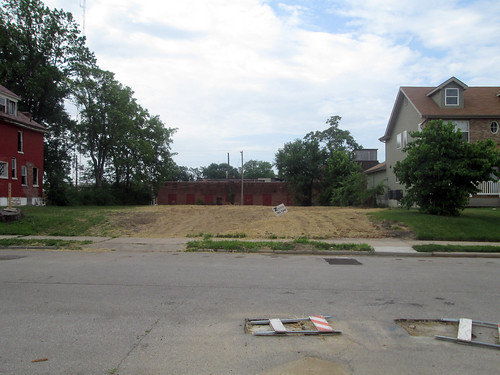 More recently I was out on a morning run when I suddenly stopped cold at this sight on the south side of the 5800 block of Enright. I instantly realized that the beautiful home at 5880 Enright in the photo below, which had also suffered a fire last year, was suddenly gone without a trace. 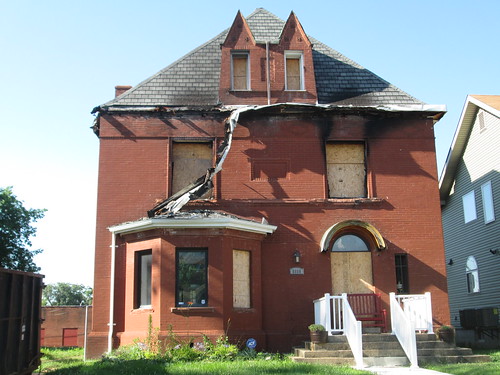 Photos above and below show the solid brick home with most windows intact on the fist floor, a side dormer window intact and the entire roof intact except for eave damage at the front and east sides. The dumpster in front of the house had seemed to indicate that damage inside the home was being cleaned out and that repairs would follow. 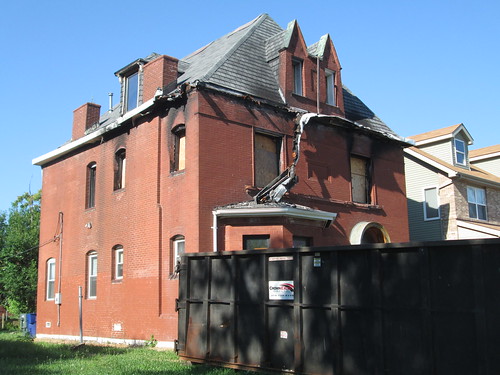 Unfortunately repairs apparently never came and City records show that a demolition permit was issued on June 5th of this year. 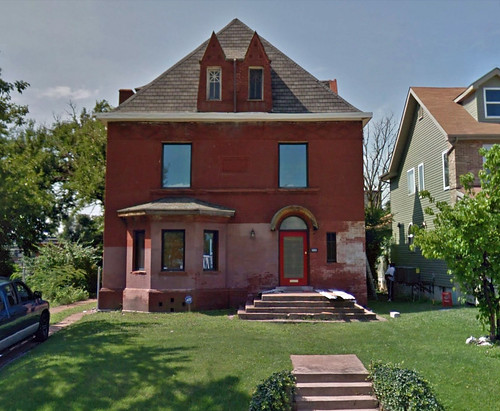 A view of the home before the fire. According to City records it was built in 1905 and was one of a handful of original houses left on this block that has mostly been re-built with new houses as part of the West End Estates development. 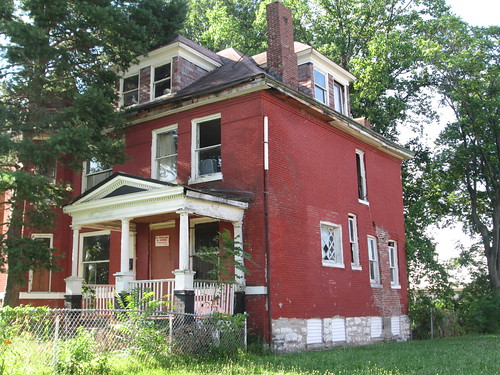 Just 2 lots east of the recent demolition stands this house at 5770 Enright that has been vacant for about 2 years now and sits in a state of limbo. Hopefully it will not join the fate of its neighbor to the west.
Posted by Vanishing STL at 6:37 AM No comments:

North Sarah Phase III to Include Demolition of Occupied Homes? 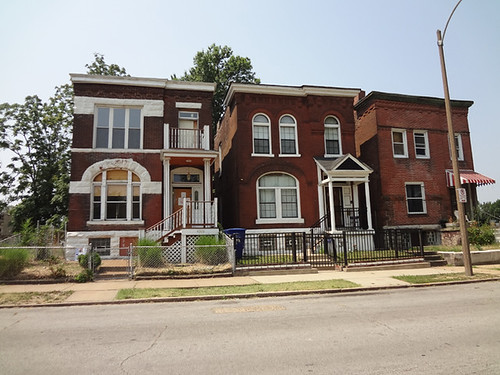 Last week a friend tipped me that the St. Louis Community Development Administration had posted a listing of funding awards from this years affordable housing applications. The list includes Phase III of McCormack Baron Salazar's highly successful North Sarah development. Phase III will contain 76 rental new construction rental units to be located on 39 parcels, which are listed by address. All but 3 parcels are currently vacant land, but parcels at 4208, 4010 and 4212 Finney Avenue are existing houses, two of which appear to be occupied, one recently occupied and all in very good condition. It would appear from the list, that these three houses pictured above, all of which are privately owned, are doomed to be bought out and demolished to make way for new construction. 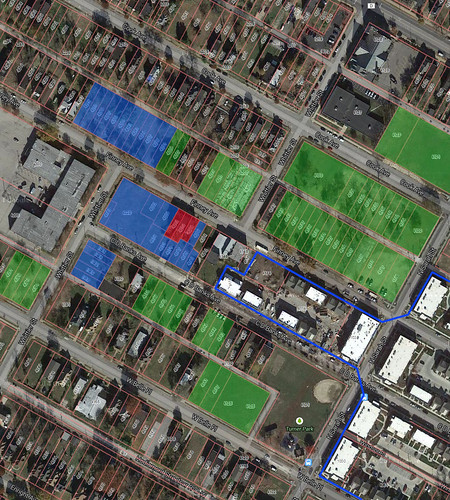 That such a thing could occur in a neighborhood that is both struggling to re-build from decades of neglect and abandonment and has a large amount of completely vacant land on which to build is both baffling and extremely frustrating. The map above shows portions of the existing North Sarah development (Phases I & II with larger buildings along Sarah Street) outlined in blue and planned Phase III shaded blue and red. The red is the three homes at 4208-12 Finney. The green shaded areas are the numerous vacant parcels in the immediate vicinity of the existing and planned North Sarah development that could be used instead of demolishing the existing houses. The area is just south of the much publicized 26 scattered site home demolitions. 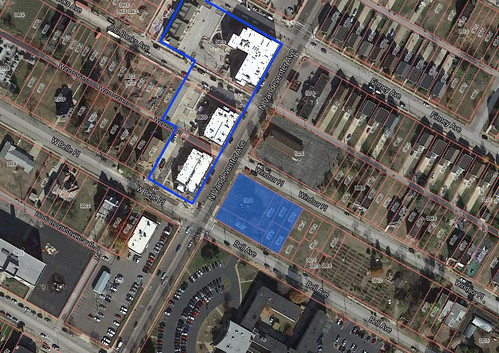 The North Sarah development has also built along the west side Vandeventer Avenue outlined in blue above with a planned expansion shaded in blue on the east side between Bell Avenue and Windsor Place. The area east of the planned expansion is a large community garden owned by Gateway Greening. 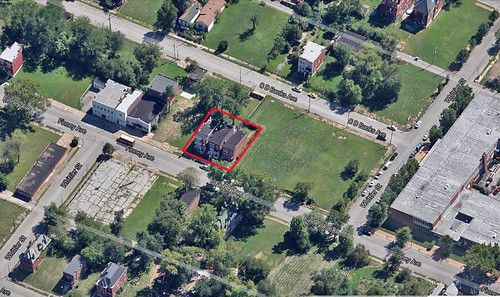 An aerial view looking southeast of the homes on Finney showing a large available piece of land across C. D. Banks to the south (directly above the houses in the photo). The Kingsway Baptist Church at Finney and Wittier will apparently be spared. 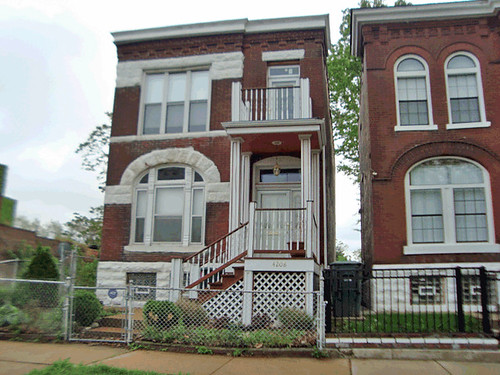 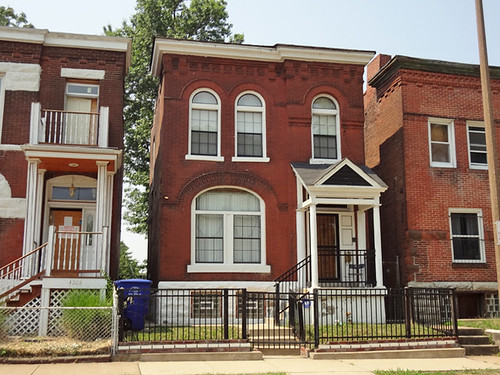 By 2013, 4208 Finney appears vacant but other than partially boarded, the home appears in good condition. 4210 in the center and 4212 at right both appear to be occupied and in very good condition as well. The three brick homes are an attractive group with almost identical massing but individual in detail. They were likely all constructed by the same builder. 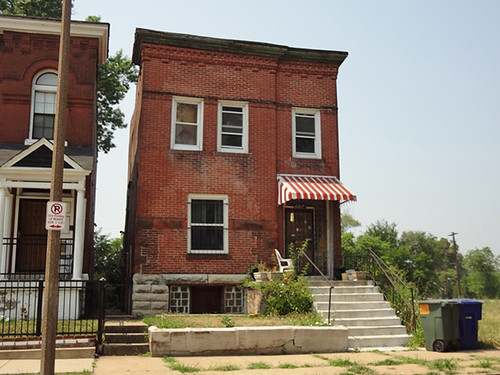 The first floor window of 4212 appears to have been altered at some point, but the alteration leaves the integrity of the house intact. 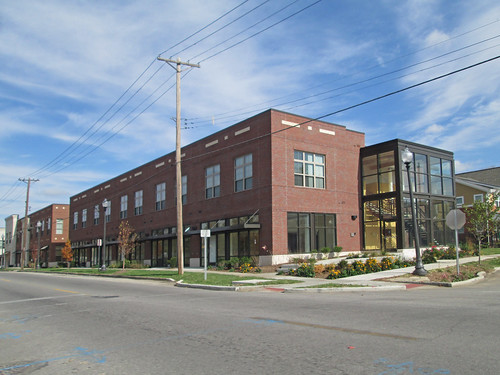 McCormack Baron Salazar's North Sarah development has thus far brought much needed life into the eastern blocks of the Vandeventer neighborhood including several live/work units included in the larger buildings along Sarah Street and Vandeventer Avenue. The architecture is a refreshing blend of contemporary and contextual that doesn't try to copy existing buildings but rather fits well as an addition of its time. 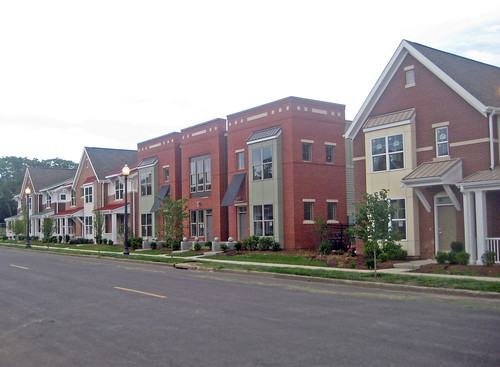 Ironically, the middle building above has very similar massing to the three homes on Finney that appear to be marked for destruction for the next phase of development. With the amount of vacant land available for new construction in the area, it is inexcusable for new development to cannibalize existing stable homes and residents. The North Sarah development and Vandeventer neighborhood as a whole would be better off in the long run if the current plan could be changed to infill new development around the existing homes on Finney. If St. Louis neighborhoods such as Vandeventer are to survive and thrive through the rest of this century, it will be through sustainable development practices that include both new infill and rehabilitation of existing buildings that give the place its unique character, not failed Modern era practices of total clearance for new build.
Posted by Vanishing STL at 6:30 AM 3 comments: