Detroit Continues to Squander its Potential 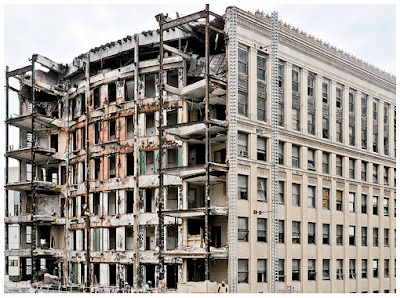 Attacked from the rear.  Demolition of the Lafayette Building begins.
Photo by Sean's Flickr photostream.  More at Buildings of Detroit
Regular readers of this blog know that it is easy to get depressed about the state of things here in St. Louis.  Then sometimes I read about events occurring elsewhere and feel pretty good about our fair City.  Recently I had one of those moments when I read that demolition began this fall on the Lafayette Building in Detroit.  In June of this year, the Detroit Downtown Development Authority had voted unanimously to demolish the building.
Reading the history of the building it is easy to think about the similar plight of the Arcade building here in St. Louis, once threatened with demolition by a former owner, then slated for redevelopment as condos, an hotel and office space, construction started, then empty again and waiting.  The difference with the Arcade is the story's ending.  Just a few weeks ago the City's Land Clearance Redevelopment Authority authorized a 10 year tax abatement on the Arcade Building to entice future redevelopment.  Compared to the Arcade, the Lafayette would have been an easy rehab.  The Lafayette is half the size and has only been empty since 1997 compared to 1978 with the Arcade Building.
In Detroit however, the story ends with an unenlightened city government squandering yet another potential jewel in Downtown.  The same narrow narrow minds were responsible for the senseless destruction in 2006 of the former Detroit Statler in 2004-2005.
Posted by Vanishing STL at 12:48 PM

Wasn't the most asinine quote from the Vietnam War, "We had to destroy the village to save it?"

I do not understand the value of disparaging Detroit as way to bolster your implicit claims to St. Louis's superiority. I, for one, am anything but depressed the state of our community. We have the power to shape St. Louis however we see fit. Unfortunately, we too often fight one another rather than identifying common goals and working side by side to achieve them.

In your view, would a 10-year tax abatement bolster the Lafayette Building's chances of attracting a redeveloper? Does Michigan have similar enabling legislation at the State level to Missouri for municipally supported redevelopment projects? Are the Arcade and Lafayette Buildings truly apples to apples comparisons? What are the differences in the regulatory and incentive environments in each city?

The Motor City is a different animal than the Gateway to the West, and I am hesitant to endorse direct comparisons between each.