4171 West Belle Place Is Too Important To Lose! 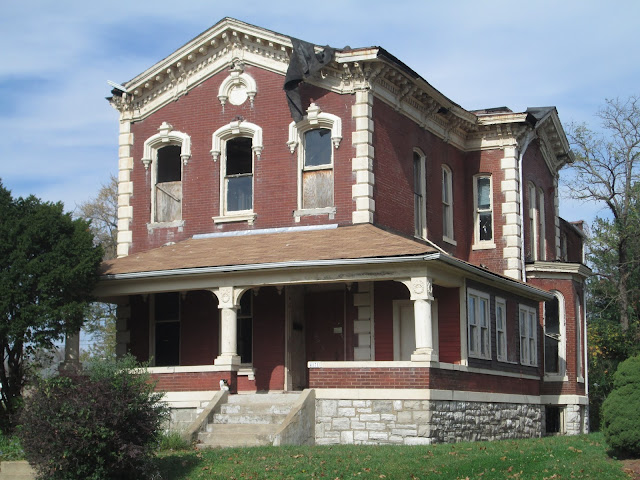 If your reaction was like mine the first time you saw 4171 West Belle Place, you stopped cold in the middle of the street, stared in awe and thought "How did this incredible house end up in the middle of this block?" The answer is quite simple: It was there before anything else was around. Hopkin's Atlas of St. Louis from 1883 shows the home (presumed to have been built in 1882) as the only building in the area, surrounded by open countryside. The area however would not remain country for very long.

The ornate high style Italianate home was built by Philip Green, who speculated with nearby real estate as development crept westward from Vandeventer Avenue, constructing 12 homes on West Belle Place by 1894. For whatever reason Green chose to build his home in a highly ornate manner compared to the homes he and others would build on the rest of West Belle Place. The National Register nomination for the home couldn't have stated better the caliber of this home:

The Philip and Louisa Green Home at 4171 West Belle Place is an exceptionally rare example of an Italianate country home in St. Louis.


When compared with other examples of Italianate buildings in St. Louis, the home is unique. It is far less formal than the designs executed for Henry Shaw or the Lemp Mansion, and much more elaborate than other rural examples like Einstmann House, or extant urban townhouses such as the William Cuthbert Jones House. The home’s elaborate cornice and use of heavy projecting hood molds and quoins, its multiple projecting octagonal bays and alternating use of both segmental and round arch window openings set the Philip and Louisa Green home apart as a high quality and unusual expression of the Italianate style in St. Louis. 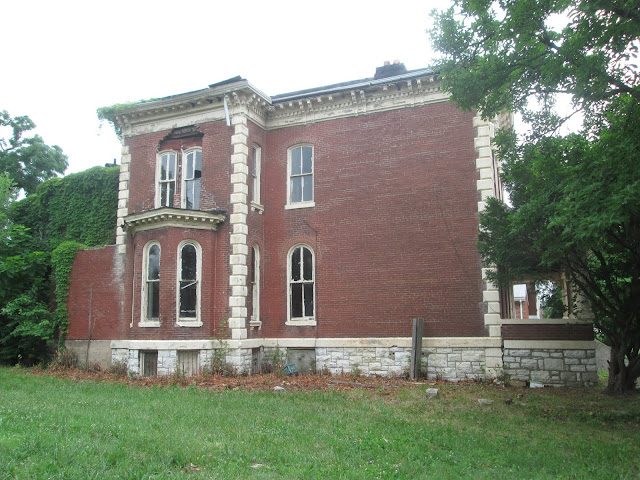 134 years later, this highly ornate "exceptionally rare" and "unique" Italianate country home is threatened with demolition! After may years of abandonment under several owners, 4171 West Belle Place was in the hands of LRA. In 2014 what seemed like the homes savior purchased the home with intentions of rehabilitation. To assist with financing the rehabilitation, the new owner had the home listed on the National Register in order to qualify for Missouri Historic Tax Credits. While the nomination was being prepared, the roof collapsed and the home was condemned by City Building Division. 4171 West Belle Place was successfully listed on the National Register on November 2, 2015, yet the owner now claims the rehabilitation as planned is not feasible and applied for a demolition permit on July 18, 2016.

This Monday afternoon, at 4:00 the St. Louis Preservation Board will decide if the demolition should be allowed. Surprisingly, the Cultural Resources Office staff recommendation is to allow demolition due to the circumstances. This is exceptionally short sighted and I would argue that the demolition should not be allowed due to the importance of this historic home. As the National Register nomination states, this home is "exceptionally rare" and "unique", which are not terms used in most nominations. There simply is not another surviving comparably ornate Italianate home in the St. Louis region.

While the owner of 4171 West Belle Place cannot be blamed for the current condition of the home, the argument that rehabilitation "feasibility" has drastically changed seems flawed. If the roof was to the point of collapse, it would very likely have needed to be completely rebuilt even if it had not collapsed. Roofs don't go from structurally sound to rotten to the point of collapse in one year.

The Preservation Board should deny this demolition and order the owner to use the estimated $5,000 cost for the demolition to construct a temporary roof over the home. If the cost of the rehabilitation minus the Missouri HTC is too much for the owner, they should consider rehabbing the home as a rental property for 5 years, which would allow the addition of the 20% Federal Historic Tax Credit. Otherwise, the LRA should take back the property and put out an RFP to find a new owner willing and able to rehabilitate the home.

If you agree that this exceptional home should NOT be demolished, please email Dan Krasnoff, Director of the Cultural Resources Office at: krasnoffd@stlouis-mo.gov and copy Adonna Buford at: buforda@stlouis-mo.gov or if you can, attend the meeting and tell the Preservation Board in person. The meeting location is 1520 Market Street, suite 2000.

Thanks for sharing this W.Belle home. I hope it will survive. Patrick Genna. Portland. Oregon

Thanks for sharing this W.Belle home. I hope it will survive. Patrick Genna. Portland. Oregon

Thanks for posting about this. It would certainly be a shame if this home weren't saved.

I was in this neighborhood a couple of months ago and a woman who lived on this block started a conversation with me about this home. She told that she was hoping that they demolish this home because she believed it was bringing down her property values.

Do you know if this is a common sentiment among those who live very close to this property?

Wow... someone call in the Garcia Prop Team, they will turn this old gem around in no time...

Sad that demolition was approved. There is some serious laziness and short sightedness in the decision making bodies in this town.

I had walked this property last year just by chance when admiring the building of old St. Louis. The architecture and details is just great and something you never see in homes today. I was trying to get a better look inside to see how the interior was holding up but the property was secured.
I just drove by it again today to see what it looks like and unfortunately, in just a years time, the house has started to really fall apart. As mentioned above, The roof is now gone and the exterior walls are no longer secure. This will be another flattened lot to add to the growing urban prairie in no time. Sad no one saved this one, or the countless others.

Is there any more news about this property? I can't find anything one way or the other.

I went by yesterday. The house is completely gone. Here is a photo:
https://www.instagram.com/p/BKypwm8AQFc/?taken-by=vanishingstl

Thanks for letting me know. That's very depressing. I was hoping it was a case of "no news is good news" :(