Page Manor is Being Demolished! 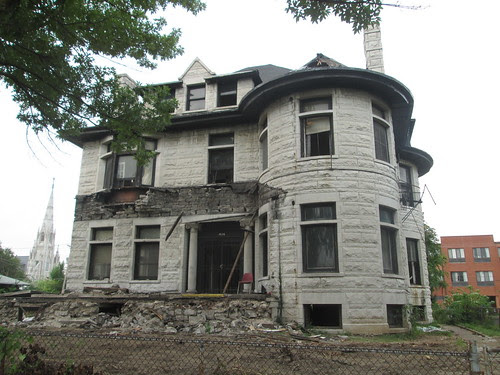 Last week I was tipped by a question someone posed on an unrelated Landmarks photo post to Facebook about what is going on at Page Manor? I looked on the Geo St. Louis and  found that a demolition permit had been applied for in July. The wrap-around porch has already been removed from the front making it clear that the mansion would soon follow. The mansion is located on Page Boulevard just west of Grand.

This is a tragic loss of one of the last grand homes in this area. With Vandeventer Place once being located just a few blocks south, Midtown's boulevards were once dotted with mansions, but this one even then stood out on what was a dense block of upper middle class homes. Over the years though, most of the mansions long ago disappeared. This demolition is yet another reason St. Louis needs City-wide Preservation Review instead of this policy up to the whim of 28 different Aldermen. The 19th Ward, where Page Manor is located does not have Preservation Review. 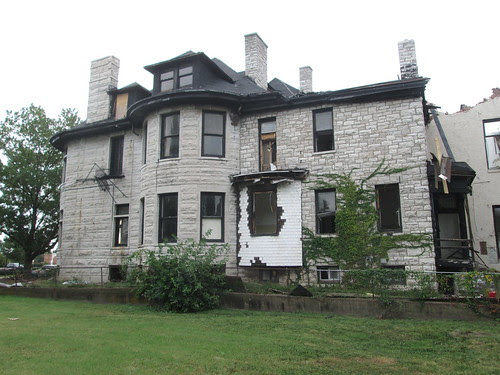 The mansion was built in 1888 according to the City's data and has been used as a nursing home for decades. 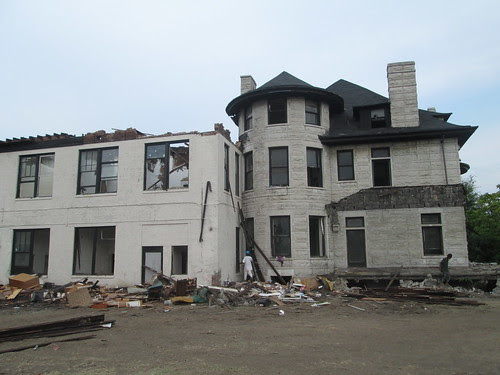 A large brick addition connects the main house with the original carriage house at the rear of the property. From the style of construction I would guess that the addition dates from somewhere between the 1920's and WWII. As I was photographing a guy who works at the Grand Manor senior residential building across the alley to the south came up and commented about what a shame it is that the old home is being demolished. He told me that Grand Manor was once located there and there are a few people who work there who were at the old building 30 years ago. 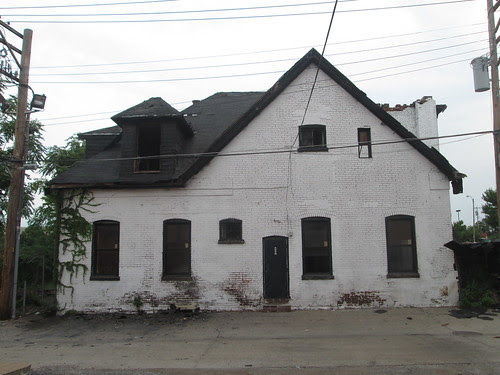 The original carriage house as viewed from the alley. 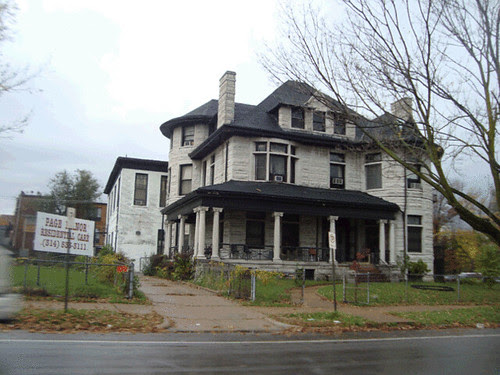 This photo from a few years ago (from Geo St. Louis) shows the original porch. The building was occupied until a few months ago. The future of the property could see new construction of a replacement facility on the site. City records show that a zoning only permit for a new residential care facility was applied for in 2009, but the guy from Grand Manor said that the owner of this home just opened another building on Hebert. This might indicated that plans for a new facility here are dead.

This mansion would have easily qualified for listing on the National Register and the rehabilitation tax credit incentives that come with listing. 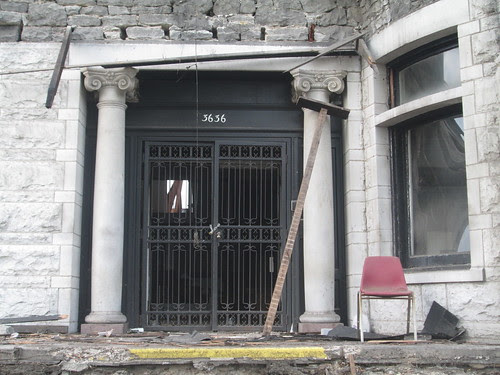 Sadly, there are a large number of vacant blocks land large enough for new construction in the immediate vicinity of the old mansion that could have been used for a new facility instead of immediately turning to demolition. One of these groups of vacant parcels is right across Cook Avenue from Grand Manor, which was the site of four beautiful and unique townhomes built just seven after the mansion now being destroyed.

Posted by Vanishing STL at 6:30 AM

If you haven't heard already, you won't believe what entity is tearing it down, and why: City Museum! Apparently, they wanted the facing limestone for a "tower" they're building in their parking lot. I think I saw a link to their Twitter feed (?), and lo and behold, there it was. The worst part about it? They were really excited about it, as in (I'm being approximate here, not verbatim), "Currently tearing down this house; using the face stone to build a tower on our lot. So stoked", etc., or some such drivel. Of course, it could simply be that they contracted to purchase the stone from a demo co., which had already been contracted to raze the structure. But the way they worded the post about it made it seem as if the Museum itself had ownership of the house. Either way, another structurally sound jem bites the dust in "Grand Center".

We are purchasing the stone. We're not the ones tearing it down.

Reading Michael Allen's article recently I was envious of Cincinnati whose Mayor gets it regarding historic preservation and personally visits every historic building that is slated for demo. I wish our City Hall wasn't so passive about it.

i give up. for whatever reason, too many st. louisans either detest or just don't care about this place.

I would bet that most St. Louisans don't know about the demolition of our historic buildings until they are already slated for destruction. I can only think of one thing that would cause our aldermen to allow this. Money. Who's getting paid off?

618I stand corrected, City Museum, and please accept my apology for having inferred malicious intent on your part. Mea culpa. You guys do good work, and I besmirched those efforts and your good reputation by inserting foot in mouth.

However, the loss of this beautiful structure, which is still of a robustly sound condition, is a bloody awful travesty.

Travesty #5,677, by my snarky count. And I must agree with Adam, as I too suspect that there is a kind of loathing inherent or present in the Old Guard residents of this podunk burg. Perhaps even embarrassment at the number of old buildings which get in the way of progress (whatever that means; I suppose one meaning is 'gets in the way of more suburban crap'). And then there's the seeming hatred of preservationists by those who feel that they should just "mind there own f***ing business". Let me be the bearer of bad news to those who hate us preservationists and our goals: This town would look like Detroit, or Camden, or Newark, NJ if it weren't for our efforts over the last forty years to preserve not only individual buildings, but entire districts.

One need only to look at the opposite of preservation, land clearance, and its disastrous effects on the stability and cohesiveness of surrounding neighborhoods to see the truth of this. And that's just one tactic of the anti-preservation crowd.

Thank you for your updates and blog. I lived in the city of St Louis for three years and loved it. Would still be there but have relocated to Georgia. I loved the old buildings and had an 81 year old home that only had one structural issue....a slight crack in a beam fixed by a joist hanger! The older homes in St Louis were built to last. I only wish the preservation of these beautiful buildings would be supported by the city. It is wonderful that the City Museum is repurposing the bricks from this building!