Historic Tax Credits: Its About JOBS!

As many of you are well aware, the Missouri Historic Rehabilitation Tax Credit program is under threat of a severe cut which is being proposed by Missouri's legislators. Senate Bill SB 120 proposes to reduce the current $140 million cap on Missouri Historic Tax Credits to $45 million, less than a THIRD of the current limit! This would effectively bring historic rehabilitation projects in Missouri to a standstill and cost thousands of jobs at a time when we are trying to re-grow the economy.

SB 120 has passed out of the Senate and is currently being taken up in the House, where it was referred to the Economic Development Committee. The committee can make amendments to the bill. Now is the time to act and call members of the committee as well your own Representative and Senator to urge them to remove the reduction in Historic Tax Credits. Committee member phone numbers can be accessed with the link above. To look up your Representatives phone number click here, and your Senator here.

Please take a few moments to make some phone calls to help prevent this devastating cut to Missouri's most successful tax credit program that has become a model for many other states, including Nebraska which is poised to start a state program this year. Each call only takes about 30 seconds and staffers in each office are keeping count of the number of calls that they get, so each call is important! Tomorrow Downtown St. Louis and T-REx are having a calling party from 4:00 - 6:00 pm at the T-REx offices on the 12th floor of the Railway Exchange Building - 611 Olive Street, above Macy's. Please RSVP on the Facebook event page, which has a much more information.

See below for some talking points. 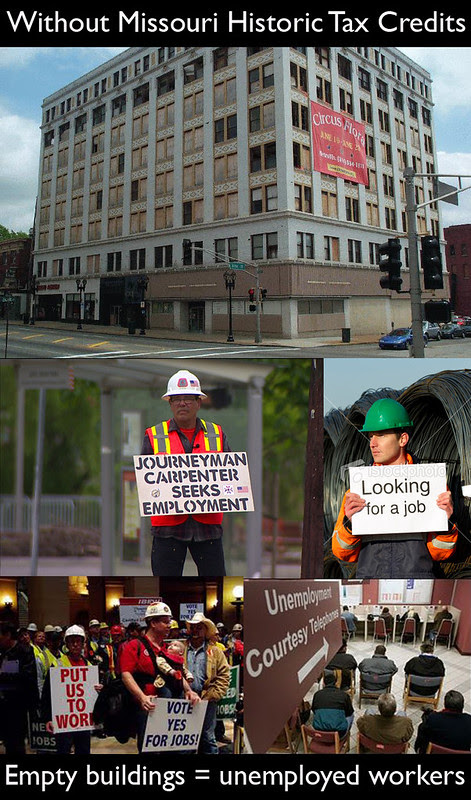 Here are some talking points to use for your calls to legislators:

Posted by Vanishing STL at 6:52 AM

It's a tough fight when the entirety of the rural Confederate States of America contingent in the Leg haaaaaaaaaaaates St. Louis, and everything associated with it. They hate unions, "urban dwellers" (dog-whistle while you're saying that), gays, the poor, the working man/woman, and pretty much any one else who isn't Rex Sinquefield or a corporation.

Just curious: Did Slay go to bat for historic tax credits when he was also in JC whoring for McKee? I mean, I wonder if he realizes that if it weren't for us dirty preservationists over the last forty years, the City would look like Detriot, in more ways than one.