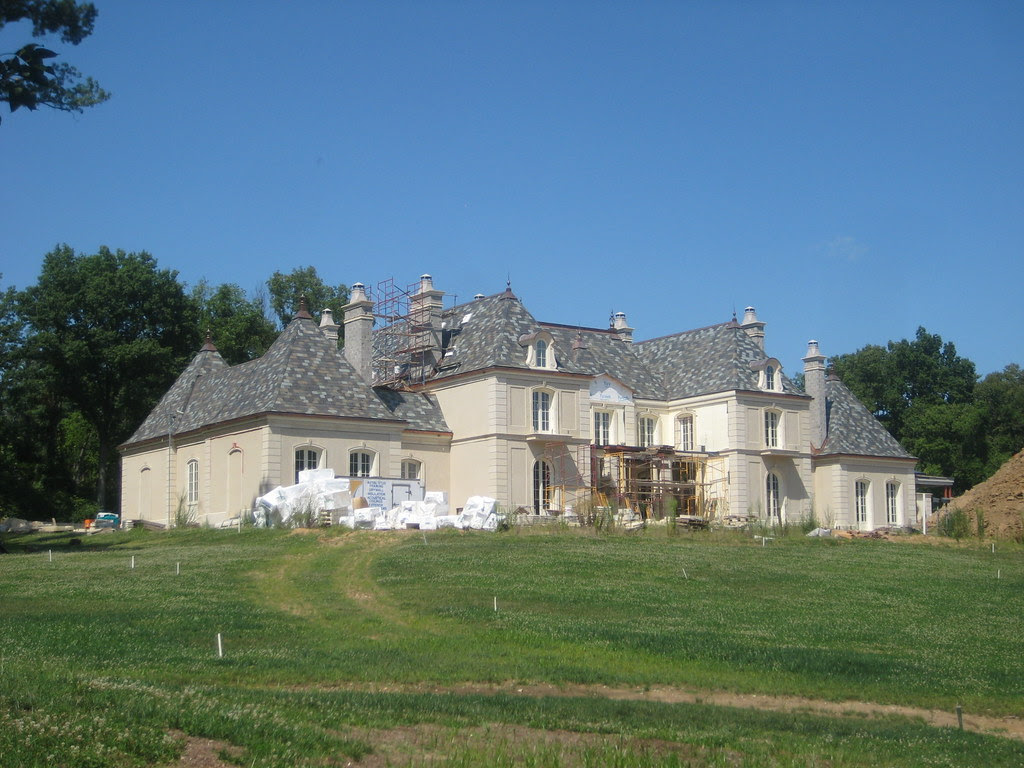 This monstrous fake French chateau is what has replaced the International Style Morton D. May residence on Warson Road in Ladue that was demolished in 2005. The McMansion was completed last fall, shortly after I took these photos. I realized recently that I never posted them. Heres a link to my photos of the unforgettable original 1941 Samuel Marx masterpiece. 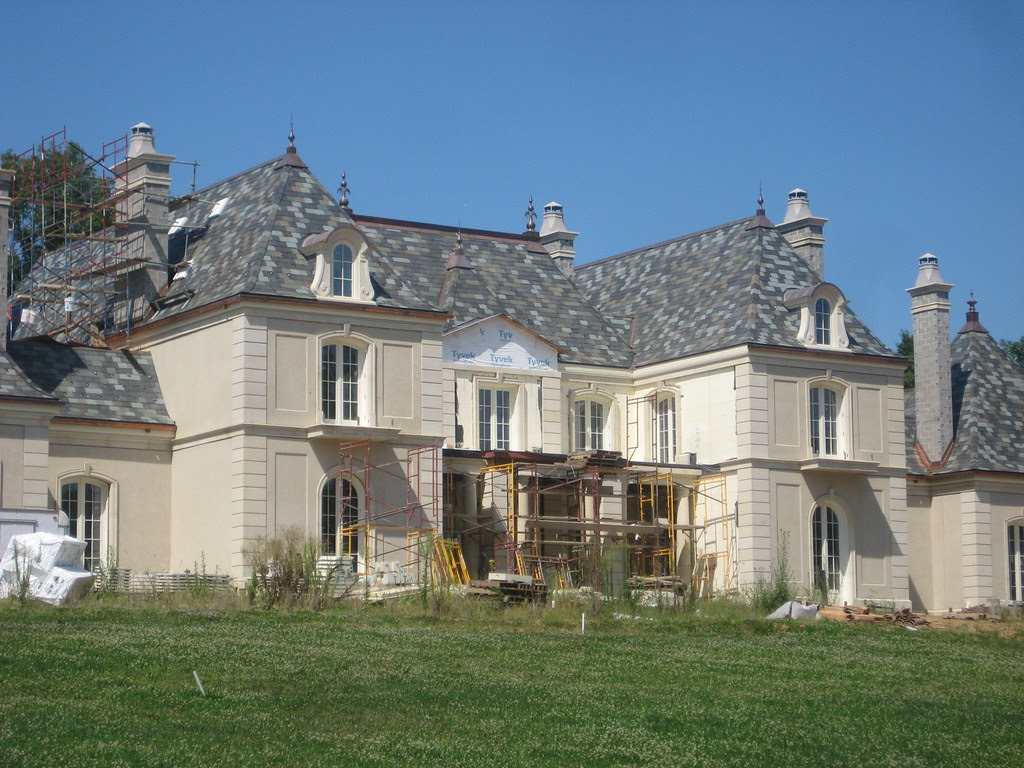 A closer shot reveals that while this house no doubt cost millions to build, it's exterior consists largely of cheap fake stucco (exterior insulation & finish system or EIFS). This great material can be found gracing just about every new Walgreens, CVS or other the front of many other big-box "category killer" strip mall stores across the country. 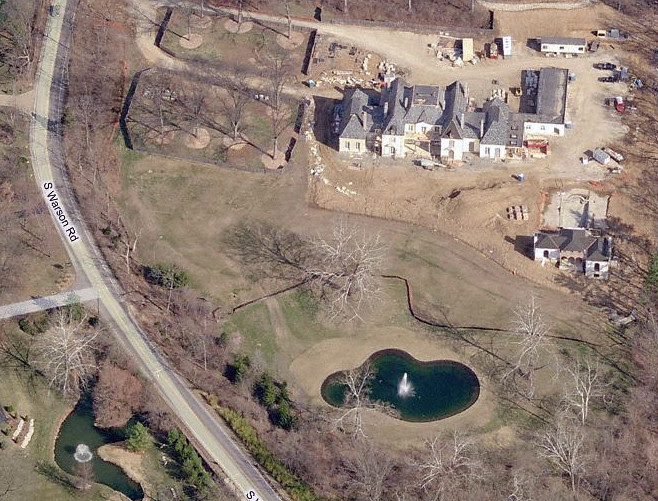 An aerial view of the complex. I wonder how long it will take snow to leak through the roof along those long deep valleys? 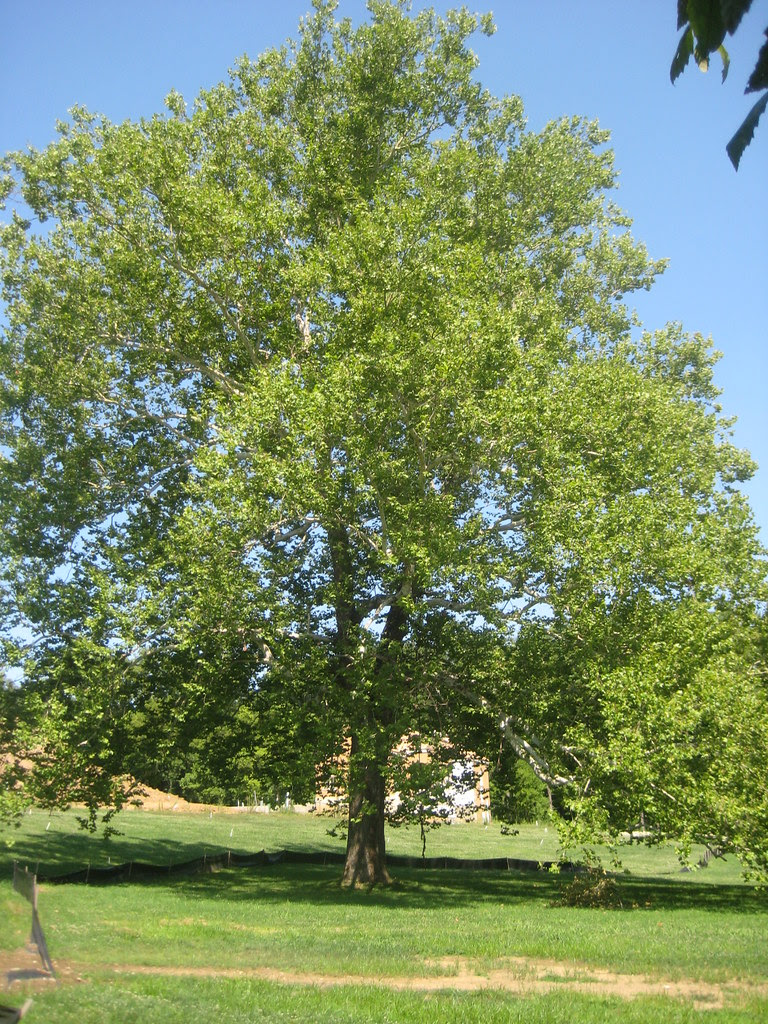 This lone tree in the middle of the rolling meadow is all that seems to be recognizable as part of the landscape of the former May residence. For some reason I was drawn to it repeatedly as I filmed one of the last days of the homes existence.
Posted by Vanishing STL at 7:33 AM

Yuck! Lots of money + no taste is not a good combo.

The May home was truly unique. Just imagine how beautiful, open and impressive it could've been if sensitively rehabbed. What is wrong with people?

Could you provide a link to the Morton D. May home pictures?

...from Google Earth or Bing? I would be interested in seeing how the old house was sited on the lot.

The aerial is from Bing. Just type in 63124. The house is on S. Warson a few hundred yards south of Litzinger Road (which is south of Clayton Road). I just added a link in the post to my flickr set of the original May residence.

In a recent talk about 1950s Modernism in St. Louis, architect Gene Mackey brought up this very house while talking about a need for a return to modesty.

During permit review, he said they try their hardest to talk people out of building these things, but Ladue refuses to enact any laws that would prevent such excess. Or as Mackey said, the mayor says it's OK to talk them about it, but don't anger them toward a lawsuit. No lawsuits!

As my wife's mother was wont to say, "For some people, all of their taste is in their mouth." The comment regarding the cheap stucco exterior is especially noteworthy. Indeed, this joint must have cost upwards of $2 mil, yet they went with cheaply applied (and not terribly durable) stucco. Penny wise and pound foolish. Of course, they could have had the modern house for a song, and restored it for half a mil, but, hey, wealth apparently doesn't buy sense OR sensibility. Huh, one other thing I've noticed about stucco: it is IMPOSSIBLE to keep clean. Have fun in your perpetually dirty house, you foolish, foolish people.

I hadn't realized that the May house was in such bad condition before it was demolished. I'm not saying that this is justification for doing so, but it would really take a special person to see the potential, recognize its architectural value, and choose to restore that home.

Leaving these sorts of homes to the free and open market apparently doesn't work. Perhaps there could be a program created for STL city and county to properly market such homes to the special buyer who can do right with them.

The condition of the May residence when I photographed it reflected that pre-demolition was already well underway, in other words the demo contractor was ripping out sections of ceilings, walls, etc to salvage anything with scrap value such as copper piping. A week after I took those photos I went back to take some more and the house was completely gone, just a pile of rubble.

Several months prior to when pre-demo began, I had walked around the exterior and peeked in the home's interior was in perfectly fine condition. I didn't have my camera with me, nor did I know of the impending demo threat.

You are right about the issue of having these modern jems just sitting on the market. The right buyer might never see it. The STL real estate market is so anti-modern that having a specialized group to market these would be a great thing!

We are trying to do just that by starting ModernSTL (www.modern-stl.com). Too bad we are too late to save this one. Travesty.

My goodness, people do not have much tolerance for tastes beyond their own do they.
Yes, this is an architectural loss to the modernist community, but at the same time realize that many people may see this as an improvement (you know, the vast numbers of people who do not care for modernism).
I personally think this building should have been preserved for its historical significance but I think you would be hard-pressed to find the masses fighting for the preservation of this structure on the grounds of aesthetics.

I am not supporting the construction of mansions, but there is not anything wrong with the style of this building. Just because it does not fit your tastes does not make it unacceptable. The style is no more fake than any revival structure built in history, whether it is the National Cathedral or Buckingham Palace! Many people do not wish to live in a glass box, which is why suburb after suburb is done typically in a neo-traditional fashion. There isn’t anything wrong with this. People like beauty, and many find it in traditional architecture.

While I also feel that this is a great shame, and the new house is completely absurd, I would like to respond to the comment that suggested that the May house could have been renovated for $500,000.

As someone who works on these kinds of houses every day and knows what the costs are, I can tell you that that number is completely unrealistic. You'd be lucky to put a kitchen in that house for $500K. Hire a landscape architect and build a new pool, and you'd quickly spend twice that much just on the grounds. My guess is that an appropriate renovation of the house, consistent with the level of design and quality that the original client would have expected, would have been in the $2-3 million range.

It was about time that the crappy May house was torn down. It was an eyesore from the very first day. Who ever designed it and those who lived in it must have been morons. It was simply ugly. It made people want to vomit. I get the same feeling when I hear those sickening names.
Finally, it got replaced with a beautiful home.