Future of the Admiral could be up in the air. 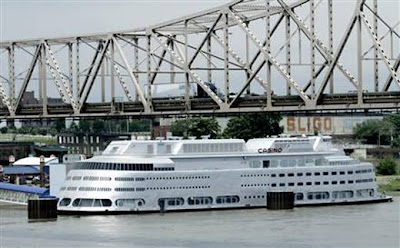 The Admiral river boat (photo from usaplayers.com)
Wednesday, in an unprecedented move, Missouri Gaming Commission will likely recommend revoking the gambling license for the President Casino, which is housed on the streamlined SS Admiral riverboat.  According to stories on KSDK and in today's Post-Dispatch, the President's owner, Pinnacle Entertainment has filed a petition with the Missouri Court of Appeals to halt the Gaming Commission's action. 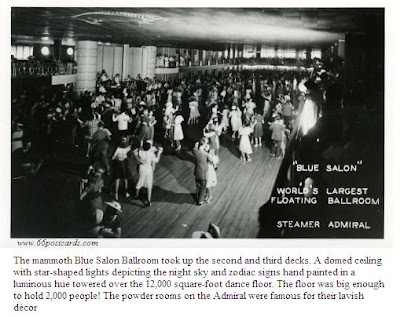 A postcard from the Admiral's pre-casino days
The President has operated as a casino since 1993, when riverboat gambling was legalized in Missouri.  The Admiral received it's unique streamlined stainless steel exterior as part of its reconstruction as a luxury excursion ship, with it's first cruise in June 1940.  Its hull however dates from 1907 when it was built as the steam ship Albatross.  In recent years there have been questions about the condition of the aging hull, however the KSDK story states that Pinnacle had intentions of repairing the hull later this year.  If the Missouri Gaming Commission revokes the license from the President, then the future of the Admiral riverboat could be questionable.  Click here for more photos and history about the Admiral.
Posted by Vanishing STL at 5:02 PM

I thought I remember about 5+ years ago a report that stated the hull was not fit for a major move of the boat up/down the Mississippi River. Alot of politics are in play here too, this will probably be in litigation for awhile.....

I love the exterior of the Admiral but the inside is a complete dump and retains little of the original glory of the boat.