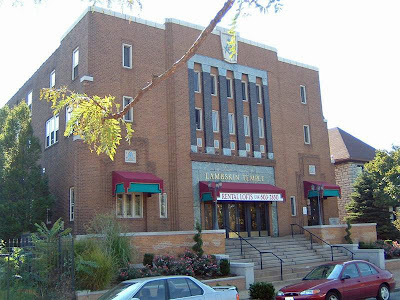 Drury wants to replace this 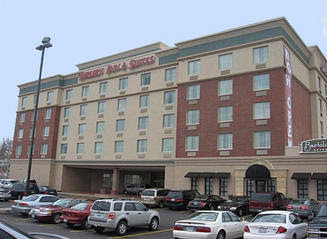 With this!
This weeks West End Word reports that Drury hotels is proposing a new hotel on Kingshighway at Oakland. While the details have yet to be made public, the article reports that the historic Lambskin Temple, which was renovated several years ago as loft apartments could be demolished as part of the plan. Additionally, several houses and small apartment buildings in the area would likely be demolished as well. Drury Development has already begun knocking on peoples doors, offering to buy them out.

Below are a few photos from St. Louis CIN of buildings south of the Lambskin Temple that could be included in the buyout. While none of them are spectacular buildings individually, they make up an entire block face of the the Forest Park Southeast National Register Historic District. Just south of the Lambskin is a somewhat unusual house built entirely of stone instead of brick (see first photo, peeking out behind a tree... photo from waymarking.com) 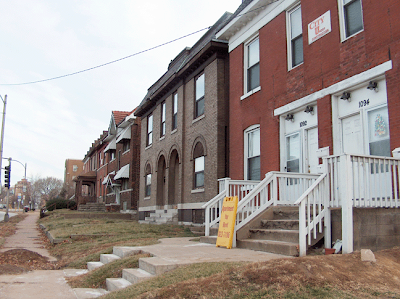 While the idea of a hotel in this general location does make sense, and Drury has a great track record Downtown, with three unique hotels located in five renovated historic buildings, their recently completed hotel at Hampton and 44 does not inspire confidence about what might get built. The photo above (from their own website) of the new hotel shows a mostly Dryvit (fake stucco) building, that seems to be aspiring to be something it's not, in a suburban style sea of asphalt and cars. The aerial shot below shows an all to familiar scene in new construction with the building hugging the back of the lot and the surface parking lot taking the front seat This is why we need a new form-based zoning ordinance with build-to requirements. 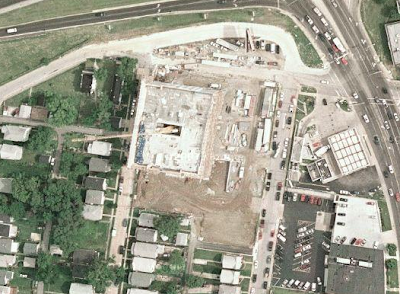 Ironically the view from Esther Avenue behind the building is actually quite urban... of course there is no entrance on this side of the building. 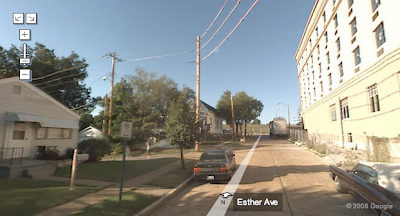 Instead of tearing down an entire block of historic buildings, Drury should look to build on land that has been left over by the reconfiguration of the Kingshighway/40 interchange. Changing the design to a single point interchange, land is now available where the cloverleaf ramps were formerly located. The land at the southeast corner of the interchange, shown below on a drawing from MODOT's website, could easily accommodate the new hotel development. The hotel would certainly be more visible from the highway as well, which would be good for business. 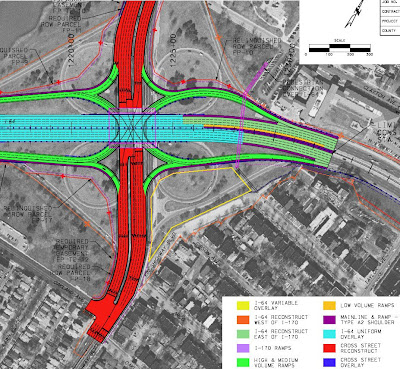 The photo below from MODOT's webcam shows the newly available land south of the new eastbound entrance ramp. The Word article mentioned that the City has looked at this land for recreation use, but is that the best use for the land? Would we really want recreation space right next to the highway? Please someone correct me if I'm wrong, but I thought the "replacement park" for the Hudlin playground was to be built off of Chouteau on or near the old Gasometer site? 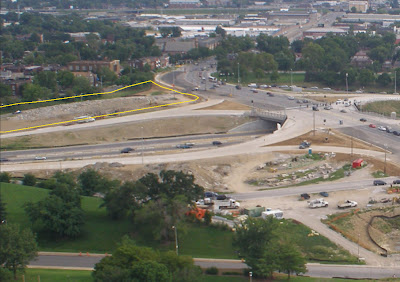 Drury will be presenting the current proposed plan and getting feedback from residents and other stakeholders at a meeting of the Gibson Heights Neighborhood Association at 7pm next Monday, August 18th at the Church of Living God located at 1034 S. Kingshighway Blvd just north of the Lambskin Temple. To get there, take Arco west from Taylor and loop around the end of the block to the church which is next to Gibson. This U shaped loop does not actually connect to Kingshighway.
Posted by Vanishing STL at 8:32 PM

Does this plan include demolition of anything along Gibson, Arco, or Chouteau past Taylor? That would be utterly devastating and totally unnecessary.

The current plan does not show the demo of any building on the 4500 blocks of Chouteau, Gibson, Arco, or Oakland. However, the left over land after the interchange work is finished is actually part of Forest Park, purchased by MoDOT in the 60's. I have some very interesting information about the land in question provided by the neighborhood association. If you would like to read it, e-mail me. sethteel(at)gmail(dot)com

Wow, what is Drury been smoking? They're the ones who saved the International Fur Exchange and renovated Union Market. Please say it ain't so.

Who the hell thinks this is a good idea? Did they get a lobotomy? Or do they simply have a fetish for defensible space and parking lots! Drury already has their nasty POS at Hampton and 44 with their wonderful "Bartolino's II," that more reminds me of J Bucks in O'Fallon than the original.

Why do they need another suburban hotel when they have another not a mile down the highway? In my opinion, it does not seem to be at capacity. Where are our city leaders on this? Why should we demolish RESIDENTIAL for crappy, placeless hotels? If Drury wants another hotel, then have them build on vacant land.

Sure the hotel tax might be lucrative, as the City effectively taxes visitors, but we need long term residency. Historic architecture, through unique buildings like these, creates an incentive for residency. Yet we erase such advantages daily. Great public policy! Flawless planning!

Such a missed opportunity upsets because when areas like Southwest Gardens peruse National Historic District status, I wonder how it's possible for leadership to ignore the merits of our historic housing?

You're right Doug, what are they thinking????

Form based zoning? What are you... some sort of crazed lunatic socialist nazi pascifist warmonger?

Chris is right: Drury has done an excellent job on historic rehab/adaptive reuse both downtown and in other cities--I stayed in a great one in New Orleans a few years back, for example.

and the interchange land is part of Forest Park and has been promised to neighborhood residents to help replace the amenities being lost across the freeway at Hudlin.

As much as I would like a decent, affordable hotel for friends/relatives to stay at within walking distance, we don't need an ugly Drury to replace buildings that have been/are being rehabbed by market forces. I would suggest looking nearer the Boyle exit (is there a east bound exit there? can't remember.)--there's a lot of empty land down there.

This is a fantastic idea. I live just a block from this site and I'm being serious when I say it's the perfect site for a hotel. It's the same naysayers on here who have prevented some density from being built in the city. Until we get density it's nearly impossible to get quality - yes, let's strive for both, but how much quality are we going to get when a hotel can simply choose between seven open sites? They'll always go with the cheapest option. Let's start rebuilding our city!!!! I'm in favor of this hotel IF - IF it fits in the context of the neighborhood - all brick, etc. Let's see the proposal FIRST and THEN decide - novel idea for most, I know.

By the way - the land "promised" to FPSE residents to replace Hudlin Park is on the north side of 40 - though similar land to what is now available on the south. IMHO - we have more than a thousand acres of the best park in the country within a freakin' quarter mile (not to mention a half dozen quality neighborhood parks). I don't understand the unquenchable thirst for grean space, any green space at any cost at any time. Please.

To Anonymous,
Your mentality of "anything is better than nothing" is completely flawed, and is precisely what has allowed our once-proud city to gradually degrade into a patchwork of mediocrity. I agree that NIMBYism is out of control in many instances, but in this case I side with the NIMBYs who want to protect this intact historic block from the creep of suburban shlock.

There is a glut of vacant land in this immediate area that should be considered, and there is absolutely no reason to displace residents and deplete the urban fabric of the neighborhood.

Moreover, the idea that any new building must be built of brick in order to "fit in" usually ends up looking like crap. Don't get me wrong, a suburban design is totally inappropriate and stict urban guidelines should definitely be upheld, but faux-historic buildings almost always look cheap and tacky. St. Louis has so much of the real thing, and new construction should look new and innovative. If a hotel is built, it should be shiny, sleek and bold.

Did anyone here say that anything was better than nothing. You're being an idiot - no one said that.

To add to this enlightening "conversation" I would just add that on multiple occassions last night the Drury's stated that the eastern boundary of the project would be the alley that runs behind the Lambskin Temple.

Could you please update your post to be more, ahem . . . , true? The Drury's are not proposing to replace the Lambskin Temple with the Drury Inn at Hampton/44.